Should You invest With Fisher Investments? 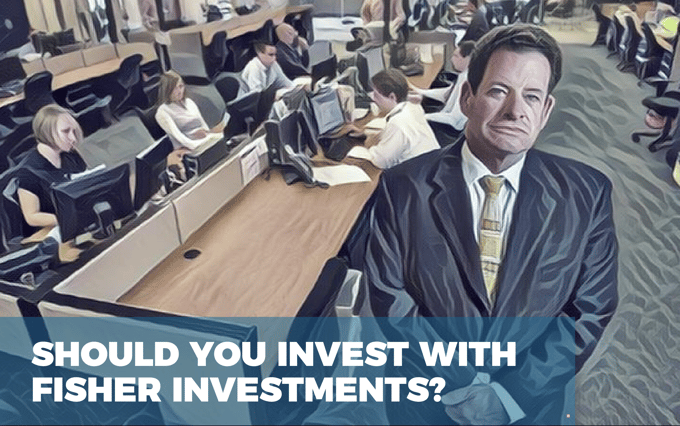 The huge success of the firm has in no small part been down to Fisher's long-standing gig as an investment columnist with Forbes, which helped him reach a sizeable audience and build a reputation as an investment expert. The momentum he enjoyed from the success of his column helped him publish 11 books (4 of which are New York Times bestsellers), and become a highly influential figure of authority within the investment sector.

How Fisher Investments Have Become A Global Giant

Fisher markets his firm as an exclusive portfolio management service that targets high net worth investors who have more than £250,000 of investable assets. Although this business model limits the number of potential clients his large-scale targeted marketing and sales campaigns, (labelled by some investors as relentless and aggressive) has contributed to Fisher investments enjoying tremendous business success.

Currently, they manage in excess of £75 billion for over 40,000 high net worth clients and 175 institutional clients, with the average amount they manage on behalf of their private clients exceeding £400,000.

To put this figure into perspective, robo-advice firm Nutmeg manages some £1 billion for 48,700 clients – which puts their average client size at £20,534, which is a massive 95% less than the average amount investors place with Fisher.

Do Fisher Investments Intentionally Keep Investors In The Dark?

While Fisher may be a prolific writer, and his firm highly successful there is little information available about his philosophy, strategies or processes in public filings or on his website, and as such questions remain over his ability as a fund manager and his firm’s ability to provide high-quality investment services.

Indeed, the frustration stemming from Fisher investments’ strategy to limit information regarding their investment products and services has resulted in some investors to voice their concerns on online forums and with Yodelar directly – with some targeted by Fisher investments fearful that they would become victims of some scam).

However, despite persistent disgruntlement from investors, Fisher Investments are unlikely to change their strategy of limiting information because a large part of their success is reliant on telephone contact from potential clients. The lack of readily available information, combined with their online advertising campaigns, helps to promote telephone engagement and creates an opportunity for the Fisher Investments sales team to, in essence, ‘win new clients’.

An Investment Guru or Marketing Entrepreneur?

During his time as an investment analyst and commentator Fisher has claimed to be able to beat the market by “identifying information not widely known” by others. However, he has made some bold predictions that have been well off the mark.

In September 2007 Ken wrote in his Forbes column: "This is a phoney credit crunch... a few months from now we will be wondering what the fuss was about." As the market began its downward spiral in January 2008, Fisher doubled down on his prediction and said: "Let me make you a solemn promise for 2008... America should do well in 2008... better, at any rate, than people expect... My advice is to stay fully invested on a global basis..."

Of course, what followed was the most significant single crash in a year since the Great Depression!

Such off the mark predictions so close to the event has caused some investors to call hogwash on Fishers boasts about his ability to beat the market by identifying information not widely known.

Throughout the years Ken's bold predictions have worked both for and against him, but one aspect of his philosophy that has consistently worked has been his ability to generate business through his marketing nous. Unlike many of his peers, Fisher and his legion of marketing representatives have used direct marketing to promote his private portfolio management service to become hugely successful and profitable - helping boost Ken’s personal wealth to a reported $3.7 billion.

Fishers effective marketing has also helped him recover quickly from poor market forecasts and fund performance. Indeed, he emerged relatively unscathed from one of his biggest failures: The Purisima Total Return fund.

As of June 30, 2016, The Purisima Total Return Fund has gone out of business!

How Good Are Fishers Portfolios?

The portfolios offered by Fisher investments to their clients can contain a mixture of third-party funds and ETF’s, including their own range of unit trust funds and funds managed by their investment policy committee.

This committee is a four-member leadership team that handles strategic portfolio-management decisions. While all members participate in research, analysis and discussion to inform strategic decision making, company founder Kenneth Fisher has played a key role in setting strategy for more than 35 years.

Fisher investments state that each of their clients’ portfolios is created individually to meet their specific needs. However, Dan Laimon, who was a former Fisher Investment counsellor, previously said that "Almost 99% of the Fisher portfolios are identical in their composition." Laimon said this was "odd" because of "the very wide range of their clients' investment objectives, income requirements, and risk tolerance."

Some investors have also raised concerns about the lack of information regarding Fisher's portfolios and the quality of the funds that have been used to build their clients’ portfolios.

Our Fisher fund performance review, identified that their current range of funds have predominantly struggled for performance in comparison to their peers, with the popular Purisima Global Total Return fund returning growth of 7.27% in the 1-year period up to 1st June 2018, which was below the sector average and worse than 55% of funds within the same sector.

However, despite recent underperformance from their funds, it is the lack of information on their service that is the biggest source of frustration for investors.

In an age where easy access to information is becoming ever more critical to our daily lives Fisher's strategy of holding back on data and the vagueness of their investment performance, could mean that high net worth investors may be better served looking elsewhere for better performing and more accessible investment options.