AXA Investment Managers is an active, long-term, global, multi-asset investor and as part of the AXA Group, they manage more than £675 million of client money. 2018 has been a challenging time for the French company who recently lost their mandate with St James’s Place to manage their £3 billion Balanced Managed fund having managed it for more than a decade, and they also announced plans to cut 210 jobs amid a shake-up their executive team.

Despite a difficult year, AXA feels the challenges faced this year will have minimal impact on their portfolio managers, and they stand firm in their belief that their investment process provides their clients with positive opportunities.

To identify the quality of the funds managed by AXA, we analysed the 1, 3 & 5-year performance and sector ranking for 84 of their funds. As detailed in this report, 17.9% of their funds consistently outperformed their peers and received a strong 4 or 5-star performance rating. However, more than 53% of their funds performed worse than at least 50% of competing funds within the same sectors during the 5 years analysed.

This analysis provides an insight into the performance of 66 funds that are managed by AXA. On display are the last 1, 3 & 5-year cumulative growth figures for each fund up to 1st November 2018. Each fund has been provided with a performance ranking between 1 and 5-stars based on how well they compared alongside all other competing same sector funds over the periods analysed. In total, 84 AXA managed funds made up of 49 unit trust and OEIC funds and 35 Offshore funds.

Among the consistently top-performing AXA funds was their Framlington Managed Fund, which holds some £546 million of client money. This Fund invests primarily in bonds issued by companies (principally UK companies) which the Manager believes will provide above-average income. This fund sits within the IA Sterling Strategic Bond sector, and a difficult 2018 saw this fund return marginal growth of 0.36% - However, in comparison, the sector averaged negative growth of -1.46%. Over the recent 5-year period up to 1st November 2018, this fund returned growth of 36.22%, which ranked 5th out of 62 funds in its sector.

Another of their funds to consistently deliver strong performance was the AXA World Funds Global High Yield Bonds fund. This popular Offshore fund holds more than £1 billion of client money and is managed by George Luckraft who aims to produce a high income and capital growth by investing predominantly in international high yield corporate debt securities over a long-term period. This fund consistently outperformed the sector average, and over the recent 5-year period it returned growth of 51.50%, which was higher than 92% of competing funds within the same sector.

The AXA Framlington American Growth fund was another strong performer for AXA. This fund has enjoyed strong returns within the competitive North American sector. Over the recent 12 months this fund returned growth of 16.61%, which was the 3rd highest out of 140 same sector funds, and over 5-years it returned growth of 106.78%, which was better than 82% of competing funds. 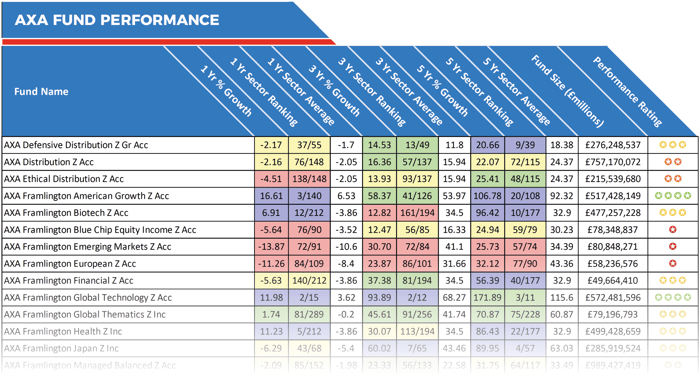 Access the full report and much more in the November edition of the Yodelar Investor Magazine.

From the 84 funds analysed 45 consistently performed worse than at least half of their peers. One of the most popular AXA funds to underperform was the AXA World Funds Euro Credit Short Duration Fund. This fund manages more than £3.4 billion of client money, which makes it the 14th largest fund from all 160 funds in the IA Global Bonds sector. Over the recent 5-year period this fund returned growth of 8.14%, which was lower than 90% of funds in its sector and well below the sector average for the period of 22.99%.

The AXA Framlington UK Select Opportunities was another AXA managed fund that has underperformed. Over the recent 12 months, this fund returned negative growth of -5.33% and over 5-years its growth of 21.9% was well below the sector average of 33.06 and worse than 80% of competing same sector funds. Despite its poor performance history, this fund is larger than 92% of funds in its sector with more than £2.2 billion of client funds under management.

AXA are a sizeable fund manager and a popular choice for both advisers and investors who entrust more £34 billion within the 84 funds analysed for this report - However, only 13.8% of these assets are in placed in funds that have consistently outperformed at least half of all competing funds within the same sector over the 1, 3 & 5-years.

Overall, our performance analysis identified that only 15 of the 84 funds analysed received a 4 or 5-star rating as they maintained a consistently competitive level of performance in comparison to their peers over the 1, 3 & 5 year periods examined. Conversely, 45 (53.6%) of their funds returned growth that was worse than at least 50% of their peers during the five-year period analysed.