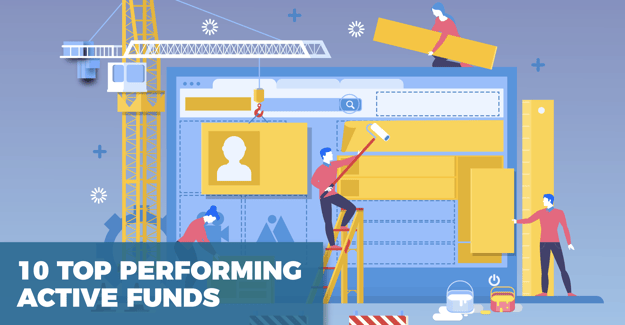 Investors seem to be voting with their feet. The scale of the recent shift of money from actively managed funds into those that track market indices has become hard to ignore.

This trend is held up by many commentators as decisive proof of investors’ belief in the superiority of lower cost passive investing over the skills and expense of a fund manager.

There is a danger that, where active management has not met expectations, investors feel that they should abandon it altogether. But a closer analysis of the data suggests many investors in active equity strategies have beaten passive funds after fees.

However, active management is only as good as its managers. So how do you separate the winners from the also-rans? “If you can identify managers who are likely to perform in the top quartile of their category, there’s a pretty good chance you’re going to beat the benchmark,” says Jim Peterson, chief investment officer of Charles Schwab Investment Advisory.

Below we feature 10 actively managed funds where the strategy of their managers has allowed them to consistently return top quartile performance that has seen them continually outperform their peers.

*The 10 top performing active funds in this report are not listed in any particular order, and their inclusion should not be viewed as a recommendation to invest.

The AXA Framlington Global Technology fund has consistently been one of the best performers in its sector.

This Fund invests in shares of listed companies engaged in the research, design and development of technologies in all sectors including IT and the internet which the fund manager believes will provide above-average returns. The Fund invests in companies of any size which can be based anywhere in the world, albeit the Fund tends to be biased towards the US as this is where the majority of technology-related companies are based. The fund manager selects shares based upon analysis of a company's financial status, quality of its management, expected profitability and prospects for growth.

This fund is managed by Jeremy Gleeson, who is widely recognised as a specialist in the technology sector and has twice been awarded the FTSE techMARK Technology Fund Manager of the Year.

Over the periods analysed this fund has consistently maintained top quartile performance within its sector, and it returned impressive growth of 171.69% in the 5 years up to April 2018. In recent months, the technology sector has seen strong growth and over the recent 6 months period, this fund achieved very high growth of 18.61%.

The Baillie Gifford American Fund aims to deliver significant outperformance for investors by identifying exceptional growth companies in America and owning them for long enough that the advantages of their respective business models and the strength of their individual cultures become the dominant drivers of their stock prices. It is a strategy that they have employed since the fund launched in 1997, and which has delivered them exceptional performance. In the 5-year period up to April 2018, this fund returned growth of 154.61%, which was better than 98% of same sector funds, and over the recent 6months, 1 year and 3 years this fund has been the number 1 fund in its sector for growth.

Based in Tokyo, Shiozumi is a bottom-up, growth orientated stock-picking manager that currently has a thematic bias driven by the Japanese economic position. Specifically, its focus is to exploit the investment potential created by the belief that Japan is in the process of two structural changes - from a regulated to a deregulated economy and from a manufacturing to a service-orientated economy: the 'New Japan'.

Launched in 1996, this often-volatile fund has primarily delivered exceptional growth. With cumulative growth over the recent 6 mths, 1 year, 3 year & 5 year periods of 23.55%, 45.02% 170.93% and 272.31% respectively, this fund has consistently outperformed every other competing same sector fund.

The Baillie Gifford Global Discovery fund is managed by Baillie Gifford's Global discovery team, which is headed up by Douglas Brodie. Launched in 2011, this fund invests in companies they believe to offer significant growth prospects with an emphasis on companies operating in industries with potential for structural change and innovation. This fund has consistently outperformed and maintained top quartile sector ranking. Over the recent 5 year period, this fund returned growth of 146.50%, which was more than double that of the sector average.

This fund is managed by Lindsell-Train co-founder and veteran portfolio manager Michael Lindsell. Launched in 1998 this OEIC fund holds some £213 million of funds under management and it aims to achieve the Fund’s objective of long-term capital growth by constructing a concentrated portfolio of “exceptional” companies, with a focus on those businesses with truly sustainable business models and/or established resonant brands. In building the portfolio, they have focused on companies demonstrating long-term durability in cash and profit generation.

Over the recent 6 month period this fund has returned growth of 11.91%, and over the past 5-year period it has achieved growth of 133.53%, which was better than 93% of competing same sector funds.

Managed by Robert Geffen, who founded Neptune Investment Management and is the architect of their investment approach. Launched in 2001, this multi-asset fund holds a relatively small £94 million of funds under management, but it has consistently outperformed its peers.

its recent 1-year growth of 22.16% was higher than any other competing fund in its sector, and over five years its growth of 86.80% was better than 98% of same sector funds.

The Neptune Emerging Markets Fund provides exposure to the powerful long-term potential growth of the world’s emerging economies. Launched in 2008 it is managed by Ewan Thompson and currently holds some £36.5 million of assets. This 5-star rated fund has consistently been among the very best performing Emerging Market funds, and over the recent one year period, it returned growth of 21.87%, which was well above the sector average of 15.51%.

The Fidelity Asia fund is managed by Teera Chanpongsang who joined Fidelity in 1994 as an investment analyst and has over 21 years investment experience. He has extensive experience and expertise in the Asian emerging markets which is reflected in the performance of his Fidelity Asia fund. The investment policy of this fund is to invest at least 70% in shares of companies throughout the Pacific Basin, but excluding Japan. The portfolio is likely to have a bias towards larger companies, and currently holds shares in Samsung, AIA Group, and retail giant Alibaba.

With a risk rating of 5 out of 7, this fund is seen as a potentially higher risk investment option, however, in recent years it has continually delivered exceptional returns. In the last 12 months, it has achieved growth of 23.87%, which was significantly higher than the sector average of 13.95 and better than 89% of competing funds.

Launched in 1999, this 5-star rated fund has been managed by James Zimmerman since 2014, and over the past few years, it consistently been one of the best performing funds in its sector. James prefers to invest in companies in which management own a significant stake, especially those in a strong financial position, as he believes that these are best placed to thrive over the long term. His view is that, in those scenarios, management owns a significant chunk of the business it is far less likely to jeopardize the long-term health of the company and will be more motivated to develop wealth through steady share price growth as the business grows profitably over time.

With funds under management close in on £300 million, this UK Smaller Companies fund has managed to achieve growth of 38.31% over the most recent 12 months, which was higher than every other UK Smaller Companies fund, and significantly higher than the 18.75% sector average. Over the past 5 year period, this funds’ performance has also impressed as it returned growth of 142.53%, which was outperformed 91% of competing same sector funds.

The very popular Jupiter European fund is managed by Alexander Darwall who is Jupiter’s Head of Strategy, European Growth.

Alexander Darwall has managed European equities at Jupiter since 1995 and this fund since 2001, making him one of Jupiter’s longest-serving fund managers. He aims to find businesses with unique products or services and a proven record of profitability. The strategy is to invest in exceptional European expertise rather than taking a view on the European geopolitical region. The fact that many of the businesses the fund invests in are thriving on the global stage means they are less likely to be affected by regional dynamics.

With its strong reputation for delivering competitive returns, the Jupiter European fund has been one of the most popular European focused funds on the markets and currently holds some £5 billion of funds under management. Performance wise, it has also been very competitive. Over the recent 12 months, this fund returned growth of 22.52%, ranking 1st out of 102 other funds in its sector and over the last 5 year period it returned growth of 88.14%, which well above the 64.94% sector average and better than 93% of competing funds.

With the exponential growth of passive investing, active fund management has frequently been negatively portrayed as investor opinion, and focus is pulled closer towards lower cost vehicles which are often perceived to by many to be the better long-term alternatives. However, as identified in this report, there are actively managed funds that are controlled by high-quality fund managers that have continually outperformed the market and offer highly competitive investment options, in particular to the growth-focused investors.

The Best & Worst Performing Funds of 2018