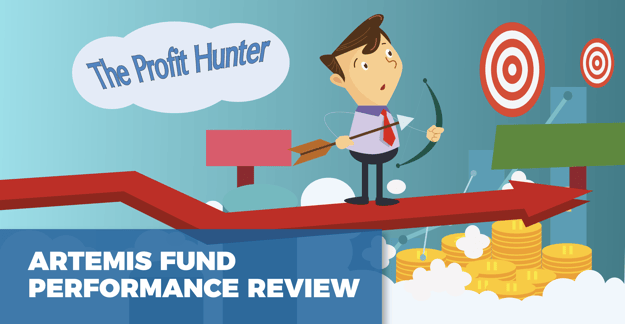 Our Artemis fund review identifies that the significant majority of their funds have consistently outperformed their competitors.

Artemis is an independent and owner managed active fund manager who opened for business in 1997. Named after the Greek goddess of the hunt, they label themselves as ‘The Profit Hunter,’ as their investment approach is focused on outperforming the market and producing long-term returns for their clients.

Although modest in size compared to wealth management giants such as St. James’s Place and Baillie Gifford - who manage some £90.7 billion and £179.6 billion of client funds respectively - Artemis still command a sizeable proportion of the UK investment market. They have amassed some £27 billion of client funds under management across their range of 23 unit trust funds, 2 investment trusts and 1 Venture Capital Trust (VCT).

In our Artemis fund review, we identify how each of these funds has performed and how they compare alongside their peers.

How Well Have Artemis Funds Performed?

To identify how each of their funds has performed and indeed if they have matched their objectives of outperforming the market, we analysed them for performance and sector ranking over the 1, 3 & 5-year period up to April 2018. Our analysis identified that the significant majority of their funds have consistently been among the best in their sector for performance with on average 77.5% outperforming the sector average over the recent 1, 3 & 5 year periods.

A very impressive 8 (30.8%) of the 26 Artemis funds consistently outperformed at least 75% of competing same sector funds over the 1, 3 & 5 year periods analysed and received a 5-star Yodelar performance rating. One of their most impressive funds was the Artemis High-Income fund, which sits within the Sterling Strategic Bond sector and currently holds some £1.3 billion of client funds under management. Over the recent 5-year period this fund returned growth of 36.54%, which was higher than 94% of same sector funds and notably higher than the sector average of 22.37%.

The Artemis Global Select fund has also consistently delivered strong returns. Over the recent 12 months, this fund returned growth of 9.43% compared to the sector average of 6.57% and over 5-years it returned growth of 84.83%, which was greater than 79% of the 220 competing funds in the same sector.

From their range of 23 unit trust funds, 8 have less than five years history. 5 of these relatively young funds are, and they have proven to be a favourite option for many investors as they hold a combined £3 billion of client funds under management.

Each of these funds has delivered competitive returns in their short history. In particular, the US Equity, US Extended Alpha, and US Select funds have been stellar since their launch in 2014, as over the recent three years they have returned growth of 57.94%, 68.15%, and 63.16% respectively - which was significantly higher than the sector average of 45.91%.

Sign in to view the complete Artemis review 2018 in the April edition of the Yodelar magazine. Not a member? Register now for just £1 and get instant access to all premium reports.

In contrast to the strong performance from a large percentage of their funds, Artemis also manage funds that have disappointed and underperformed when compared to all other same sector funds - Two such funds were their Global Energy and their Strategic Assets funds.

Their Global Energy fund launched in 2011 and its primary objective is to deliver long-term capital growth by investing in a portfolio of companies in the oil and gas sector and energy technologies. However, to date, this fund has been one of the worst performers in its entire sector. Over the recent 5-year period this fund returned negative growth of -34% and ranked 172nd out of 174 funds in its sector. It has consistently performed well below the sector average, and over the recent 12 months, it returned negative growth of -6.41%; which was well below the 4.45% sector average.

The recent 5-year growth of this fund was 16.97%, which outperformed 94% of competing funds within the same sector, where the average growth was 43.95%. Over the most recent 12 months, this fund fared even worse as it was outperformed by 96% of its peers as it returned negative growth of -2.51%. 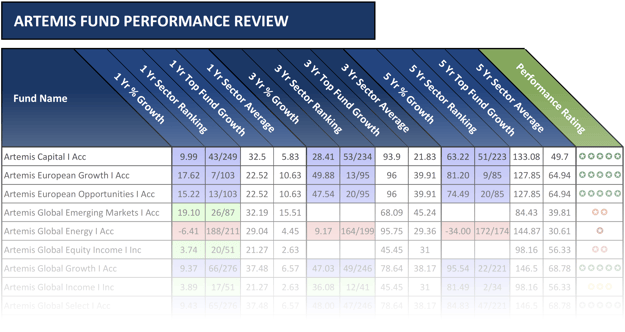 Sign in to view the complete Artemis review 2018 in the April edition of the Yodelar magazine. Not a member? Register now for just £1 and get instant access to all premium reports.

How Have Their Investment Trusts and VCT fund Performed?

Alongside their 23 unit trust funds, Artemis also manage two investment Trusts one focusing on UK equities and one on global equities, and one venture capital trust (VCT).

The Artemis Alpha Trust focuses primarily on UK equities and returned comparatively low growth of 7.07% over the recent 5-year period. However, over more recent times it has been much more competitive returning growth of 14.46% this past year.

The Mid Wynd International Investment trust aims to profit from long-term trends such as automation and online services. It follows a conservative approach but has still managed to achieve impressive growth of 106.37% over the recent 5-years and 14.87% over the most recent 12-months.

The Artemis VCT Plc focuses primarily on smaller UK companies within the technology, industrial and healthcare sectors. This VCT has been very successful, and over the most recent 1, 3 & 5 year periods it has returned huge growth of 43.58%, 158.73%, and 275.88% respectively.

Should You Invest With Artemis?

Artemis launched in 1997 with the aim of using a forward-thinking, active fund management approach to deliver exemplary investment performance for their clients, and as identified in our independent analysis, the significant proportion of their funds have indeed provided exemplary performance.

In fact, based on the performance and consistent quality of their funds Artemis ranked 2nd from an analysis of more than 100 investment brands in our most recent fund manager league table.