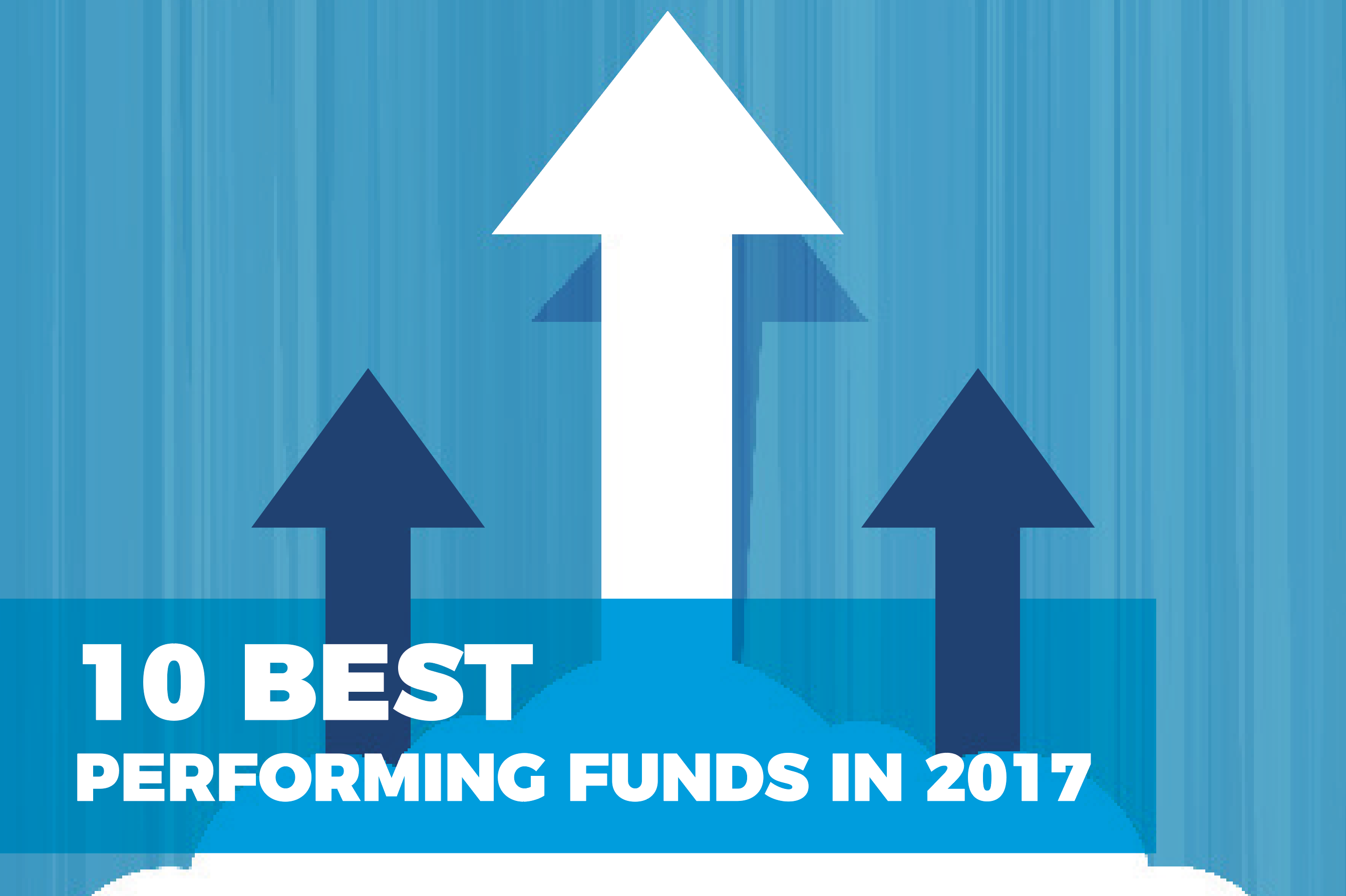 As we entered 2017 on the back of some huge political changes many industry experts had predicted that this would be a year for caution – but 2017 has delivered record highs with many investors enjoying significant gains from their portfolios.

But which funds and which sectors delivered the biggest gains in 2017?

In this report, we highlight 10 funds that have returned the biggest growth in 2017. These funds were analysed alongside more 3,100 funds classified by the investment association. The funds detailed in this report have factually been the best performing funds in their sectors in 2017.

However, their inclusion in the 10 best performing funds 2017 list does not mean they have consistently delivered top performance, nor should their inclusion be viewed as a recommendation to invest.

The Old Mutual UK Smaller Companies Focus fund launched in January 2002 and currently holds over £357million of investor savings. This fund invests primarily in an equity portfolio of UK smaller companies and from our analysis of over 3,100 funds, it’s growth of 47.22% was the highest returned in 2017.

However, it hasn’t just been 2017 where this fund has delivered stellar performance. Over the recent 5 years it has consistently been the best performing fund in its sector with growth of 216.54%.

The Legg Mason IF Japan Equity fund has consistently been a top performer in the traditionally higher risk Japan sector. This popular fund holds more than £807million of investor assets and with growth of 46.5% over the recent 12 months it has comfortably returned the highest growth in its sector. Over the recent 5-year period this fund has consistently outperformed its peers as it returned huge growth of 328.27%.

Launched in November 2008, the Baillie Gifford Greater China fund has enjoyed an excellent period of performance. Over the recent year this fund has returned growth of 44.51% making it the top performer in its sector. It has also been the best performing fund in its sector over 5 years with growth of 140.07%.

This fund primarily invests in companies that are either domiciled, incorporated or conduct a significant portion of their operations in mainland China, Hong Kong or Taiwan, which are traditionally regions with high levels of volatility.

The fund with the 5th highest level of growth in 2017 was the Invesco Perpetual Japanese Smaller Companies fund, which is 1 of 4 Japanese focused funds to make this list.

Despite being more than 30 years old, The Invesco Perpetual Japanese Smaller Companies fund holds are relatively small £76.54million. Although this fund has enjoyed growth of 43.38% this year it hasn’t always been a consistent top performer and its focus on smaller companies within Japan makes it a higher risk investment option that may not be suitable to investors who have a cautious investment approach.

Since its launch in September 2014, the Polar Capital UK Absolute Equity fund has been the best performing fund in its entire sector. In 2017, it has delivered growth of 42.90% and over the recent 3 years it has returned growth of 89.95%.

This fund invests predominantly in UK companies and, to a lesser degree, in European and global equities and currently holds more than £486million of investors’ savings.

The 4th and final Japanese focused fund on our list is the First State Japan Focus fund. This young fund was only launched in October 2015 and to date it has amassed just over £28million of funds under management. Unlike some of the other Japan focused funds, the First State Japan Focus fund invests primarily in large to mid-sized companies in Japan with a stock value that normally exceeds $1billion.

2017 initially seen this fund get off to a rocky start but from April onwards it has enjoyed strong growth and over the past 12 months it has returned growth of 41.56%.

The JPM Asia Growth fund sits within the competitive Asia Pacific excluding Japan sector. With funds under management totalling £241million this fund has consistently been among the best funds within it sector and over the recent 5-years it has returned growth of 93.29%. However, it has 2017 where this fund has really come on strong in comparison to other funds within the same sector. Over the recent 12 months this fund returned impressive growth of 40.45%.

The investment objective of the Henderson China Opportunities fund is to provide long-term capital growth by investing in Hong Kong and Chinese company shares.

This popular fund is the only fund on this list with funds under management exceeding £1billion. It also sits within the same sector as the Baillie Gifford Greater China fund and just like this fund it has enjoyed consistent top performance within its sector over the recent 5 years. Although its growth of 39.19% was one of the highest in 2017, it was still below that achieved by the competing Baillie Gifford Greater China fund. However, over the recent 5-year period it returned growth of 141.87%, which just pipped that of Baillie Gifford’s fund. 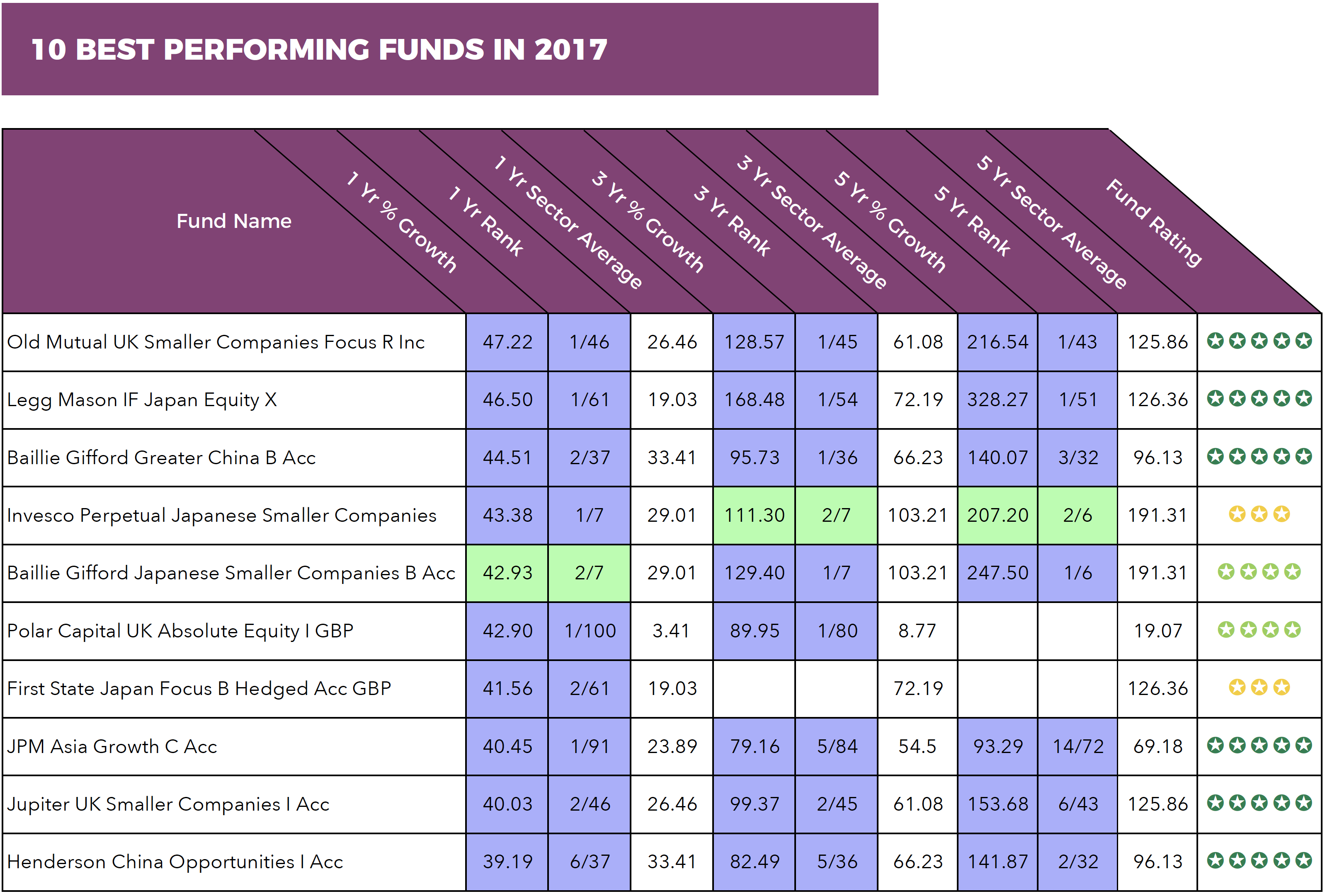 * The above table identifies the 1, 3 & 5 year growth, sector rank, sector average & overall performance rating of 10 funds that returned the highest levels of growth in 2017

Each of the 10 best performing funds listed have factually returned the highest level of growth in their sectors over the recent 12-month period.

However, changing market conditions can quickly and negatively impact on the performance of any fund. Therefore, Investment decisions should not be made based on short term top performance.

Although fund performance can fluctuate it is worth noting that all 10 of the top performing funds in 2017 are actively managed.