Polar Capital is a specialist active fund management firm that launched in 2001. Since then they have grown to consist of 12 investment teams managing specialist, active and capacity constrained portfolios, with combined assets under management of £13.6billion.

Principally located in London but with offices in Tokyo, Connecticut, Jersey, Edinburgh, Shanghai and Paris, they continue to grow towards their goal of becoming a market leading specialist fund management company, as their range of funds and investment trusts become increasingly more popular with investors and advisers.

To identify how each of their funds has performed and indeed if they have matched their objectives of outperforming the market, we analysed them for performance and sector ranking over the 1, 3 & 5-year period up to 1st September 2018.

Our analysis found that only 26% had performed better than at least two-thirds of same sector funds during the same period.

42.7% of client funds under their management are held in the best performing Polar Capital funds

Three of the most popular funds managed by Polar Capital are also among their best performers. Their Global Technology fund which holds some £2.3 billion of client funds under management launched in October 2001 and aims to achieve long-term capital appreciation through investing in a globally-diversified portfolio of technology companies.

Over the past twelve months, this technology fund returned growth of 32.12%, which was well above the 21.61% sector average and over 5-years it was the top fund in its sector with cumulative growth of 216.33%.

The Polar Capital Global Insurance fund was also a consistent top performer. This fund currently holds some £1.3 billion of client assets, and over the past 5-years, it returned impressive growth of 109.75%.

Another Polar Capital fund to impress is their relatively young Biotechnology fund. This fund launched in October 2013 and invests primarily in American Biotechnology and Pharmaceutical companies. Over the past 12 months this fund performed better than 97% of same sector funds with growth of 20.40%, and over 3-years it returned growth of 71.25%. 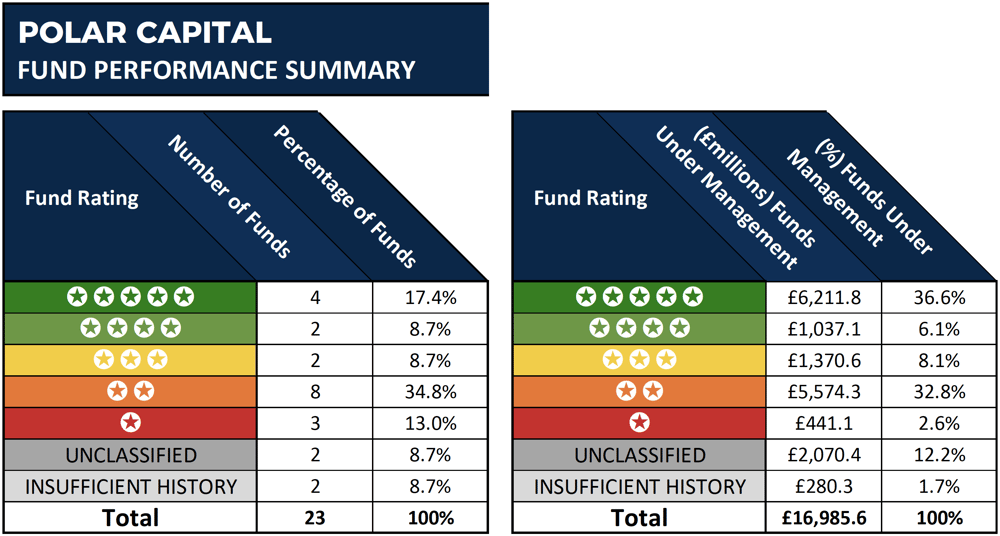 Among the Polar Capital funds to struggle for performance compared to their peers was their Emerging Markets Income fund. This fund primarily invests in Chinese and Indian equities, and over the recent 5-year period it returned 34.86% which was well below the sector average of 52.31% and worse than 85% of competing same sector funds, and over the recent 12-months, it returned negative growth of -2.77%.

How Well Have Polar Capital & Their Funds Performed?

Despite their relatively small size, Polar Capital has managed to amass over £13 billion of investment in their small selection of funds. As identified in this report the majority of their client assets are held in their most popular funds which are also their best performers.

Therefore, despite clear underperformance from some of their funds, Polar Capital has proven their ability to deliver highly competitive returns for a proportion of funds within specialist sectors.