Royal London is the largest mutual life, pensions and investment company in the UK, with Group funds under management of around £123.4 billion.

In this review we analysed the performance and sector ranking of all unit trust & OEIC funds, Life funds and Pension funds managed by Royal London Group companies.

Although a proportion of these funds have consistently been among the best performers in their sector, our report identifies that 67.1% of the 389 funds analysed have consistently underperformed compared to their peer

Less than 14% of the 394 funds analysed were unit trust and OEIC funds. Yet despite this, in excess of £42.5 billion of client assets are managed by these funds - which is more than one third of the total funds under the management of The Royal London Group.

Through a combination of new client money and growth, the total assets of these 46 funds increased by £3.3 billion from £39.2 billion at the start of 2018.

To identify the performance and sector ranking for each of Royal London’s 46 unit trust & OEIC funds we compared their returns to every other competing fund within the same sector over the recent 1, 3 & 5year period, up to 1st June 2019.

Royal London’s range of unit trust funds are highly regarded by investors and advisers as some of the best funds on the market. Indeed, our analysis identified that an impressive 26.1% of these funds have consistently outperformed the majority of their peers over the periods analysed.

The £2 billion Royal London Sterling Credit fund has consistently been one of the best performing funds in the IA Sterling Corporate Bond sector. This corporate bond fund invests in fixed interest securities, primarily in the Banking and Financial services sector with holdings in Prudential, Co-Operative and Santander UK. Its strategy has returned growth of 4.62%, 17.11% and 29.19% over the recent 1,3 & 5 years, which ranked higher than at least 75% of all other funds in the same sector.

With client assets under management of £1.9 billion the Royal London UK Equity Income fund is the 8th largest fund in the UK Equity Income sector. Managed by veteran fund manager Martin Cholwell, this fund has warranted its high status with Investors by consistently ranking among the best in its sector for growth. Over the past 5years this fund has returned growth of 33.92%, which was comfortably better than the 24.75% sector average.

The Royal London Ethical Bond is another Royal London fund that has continually outperformed at least three quarters of competing funds within the same sector.

Similar to other Royal London Bonds this fund invests primarily in Banks and Financial Services companies, which makes up 19.5% of the funds portfolio. This fund sits within the Sterling Strategic Bond sector alongside 64 competing funds with at least 5 years history. Despite being a relatively low risk, low growth sector the Royal London Ethical Bond returned growth of 29.6% over the past 5 years which was the 4th highest in its sector and well above the 17.64% sector average.

The Royal London Sustainable Leaders Trust invests primarily in UK based Industrial, Financial, Healthcare and Technology companies and is classified within the IA UK All Companies sector. This fund currently manages £695 million of client assets and it has consistently been one of the top performers in its sector. Over the recent 5 years it returned growth of 61.75%, which was more than double the sector average and better than 94% of competing funds within the same sector.

Like many of Royal London’s funds the Royal London Sustainable Managed Growth Trust has over 300 holdings. This fund follows an ethical investment policy and despite sitting within the low risk IA Mixed Investment 0-35% Shares sector it has managed to return growth of  22.81% and 35.45% over the past 3 & 5years, which were the highest in its entire sector. 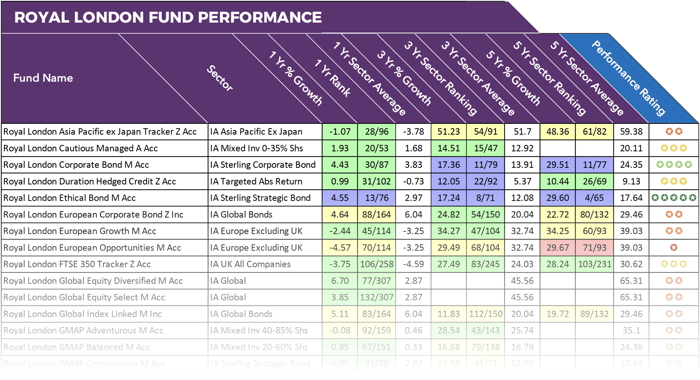 Not all of Royal London’s unit trust funds managed to deliver competitive returns. One of their most disappointing funds was their Royal London Short Duration Gilts fund, which currently is entrusted to manage over £870 million of investor’s money. This fixed interest fund is one of 28 funds classified within the UK Gilts sector. Over the recent 12 months this fund returned growth of just 0.9%, which not only fell well below the 4.43% sector average, but it was the worst of all 28 funds in its sector. Over 3 & 5 years it’s performance was even more disappointing as it returned growth of just 1.44% and 3.87%, which was the worst in its sector and well below the average of 12.01% and 29.35% over the above mentioned time periods.

The Royal London UK Opportunities fund was another Royal London fund that has struggled in comparison to its peers. Launched in 2007, the Royal London UK Opportunities fund is entrusted to manage £752 million of client assets. This UK focused fund aims to achieve above average returns but in recent years it has been among the worst performing funds in its sector. Over the recent 12 months it has returned losses of -9.58%, which ranked 219th out of 258 funds in its sector, and over 5 years it’s returns of 16.40% were almost half that of the sector average and worse than 85% of same sector funds. 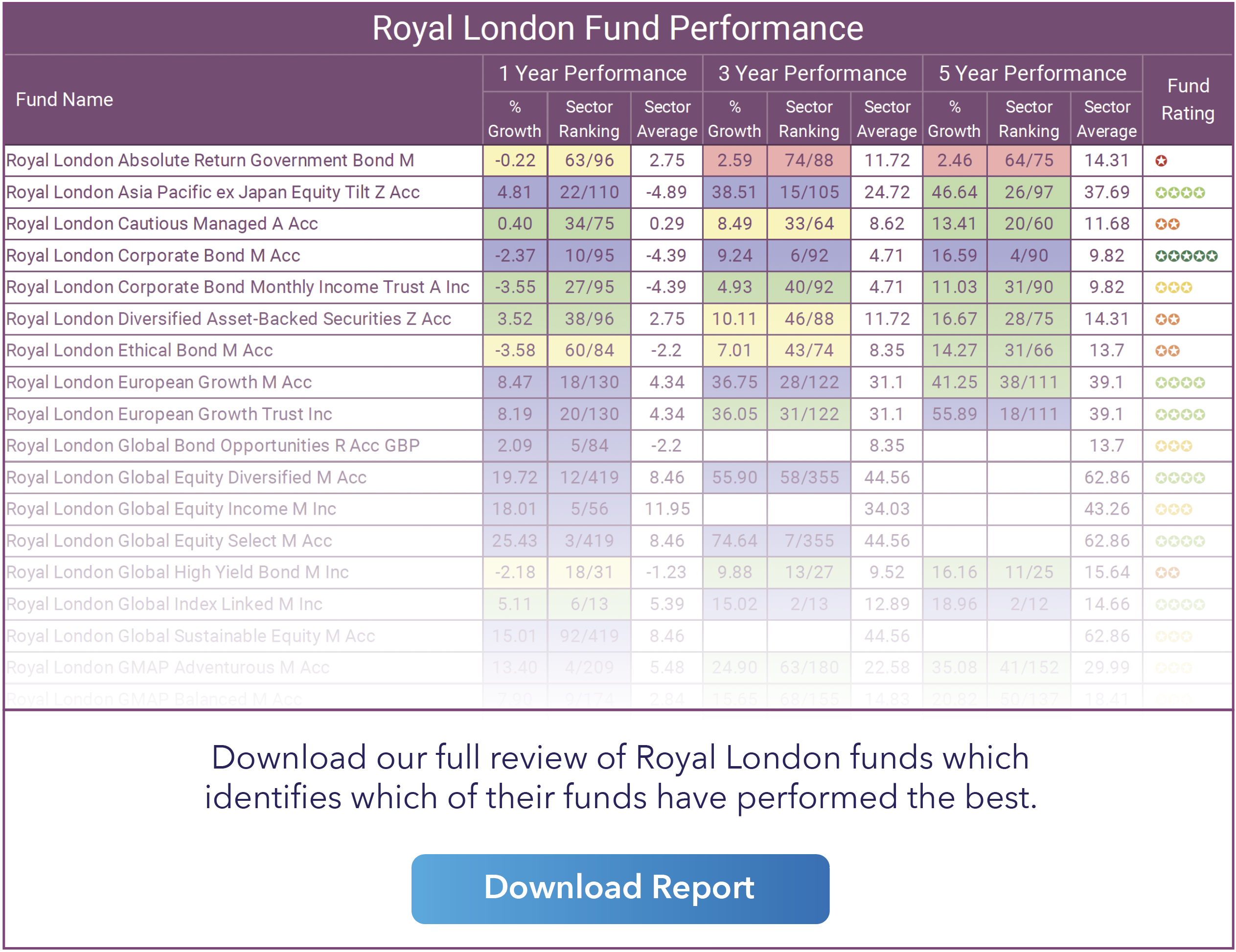 Royal London are the UK’s largest mutual life insurance and pensions company. They currently manage 295 pension funds and our analysis of these funds found that 18 have consistently outperformed at least three quarters of their peers with their returns considerably higher than the sector average.

One of Royal London’s best performing pension funds was their RLP Sterling Extra Yield Bond. This fund is classified within the Sterling Strategic Bond sector and over the recent 5 year period this fund returned growth of 35.80%, which was the highest growth returns of all 143 funds in its sector and more than double the 16.72% sector average.

The RLP Medium (10yr) Corporate Bond Pn was another of their pension funds to excel in its sector. This popular pension fund manages £1.1 billion of client assets and over the recent 1,3 & 5 years it returned growth of 5.16%, 17.71% and 33.17%, each of which were better than 94% of competing funds within the same sector.

The Royal London European Growth Pension fund is a European Equity fund which aims to provide above average capital growth over the medium to long term by investing in a portfolio of securities of companies in any European country, including Turkey, but excluding the United Kingdom.

A difficult period for European Equities saw the sector average losses this past 12 months but over the past 3 & 5 years the Royal London European Growth Pension fund returned growth of 41.62% and 59.31%, which were among the best in the entire sector.

The ‘Royal London Governed Portfolio 1’ pension fund aims to deliver above inflation growth in the value of the fund at retirement, whilst taking a level of risk consistent with a cautious risk attitude over a long time period. Performance wise this fund has been one of the best in its sector and over the recent 5years it returned growth of 38.68%, which was better than 93% of competitors.

Launched in May 2000, the RLPPC UK Aggregate Bond Pension is managed by the Royal London Pooled Pension group. Over the past 1, 3 & 5years this fund has returned growth of 4.50%, 18.60% and 35.53%, which was consistently better than at least three-quarters of competing funds within the same sector. 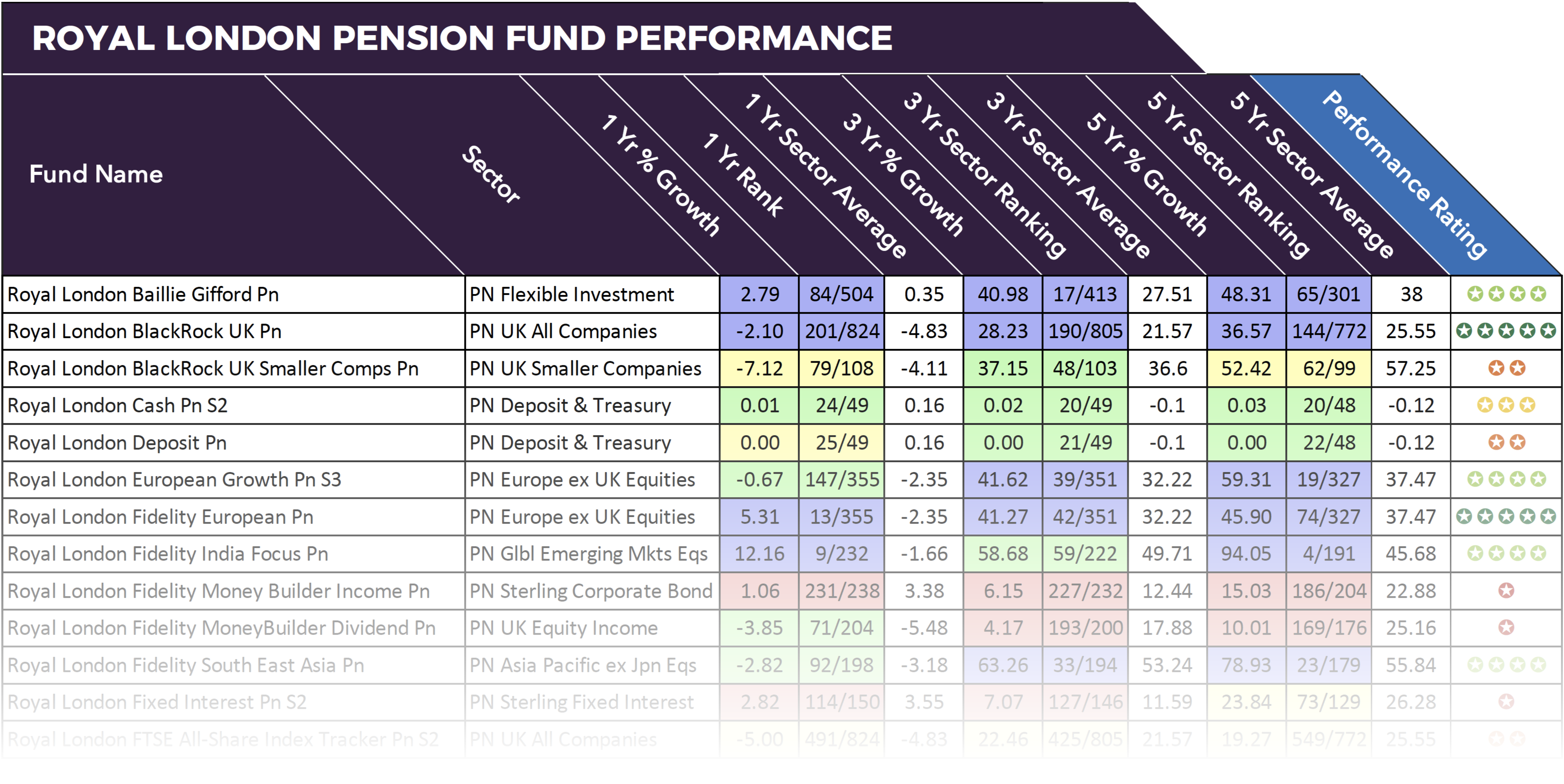 72.5% of the Royal London Pension funds analysed consistently performed worse than at least half of their peers during the periods analysed, and among the worst performers was the RLP Investec Global Energy Pension fund. This commodities and energy fund takes on a relatively high level of risk and invests primarily in fuel companies such as BP, Total, Royal Dutch Shell and Exxon Mobil. However, it has suffered a dreadful few years with losses of -10.02 this past year along and cumulative losses of -31.80% this past 5 years.

The RLP Short (5yr) Index Linked Pension fund was another Royal London pension fund to disappoint. This fund currently manages £682 million of client assess and as a low risk investment it has managed to return growth of 7.73% this past 5 years. However, this figure was the lowest of all 127 funds in the UK Index – Linked Gilts sector, which averaged returns of 54.34% for the period.

48 of the 389 funds analysed were from Royal London’s Life fund range. 22.9% of these funds consistently returned growth that was higher than the sector average and ranked among the best performers in their sectors.

The RLL Defensive Managed fund invests in other Royal London Asset Management (RLAM) funds and is designed to maximise "real returns" over a five year time period. This small fund holds only £3.55 million of client assets but it has consistently excelled within its sector. Over the recent 5years this fund managed to return growth of 29.80%, which was comfortably above the 17.89% sector average and better than 95% of competitors.

The RLL Fixed Interest fund invests in a spread of fixed interest investments including government and corporate bonds. This fund is classified within the LF Sterling Fixed Interest sector and over the past 1,3 & 5years it has returned growth of 3.31%, 9.53%, and 21.71%, which were consistently some of the highest in its sector.

Launched in April 1985, the Royal London Equity fund invests primarily in UK companies and despite the difficulties faced by UK equities in recent times this fund has managed to return growth of 26.28% and 28.69% over the recent 3&5 years, which was better than at least half of all other funds in its sector.

The RLL Managed fund is designed to maximise "real returns" over a ten-year period. The fund invests in other Royal London Asset Management (RLAM) funds. The manager ensures the maximum potential for capital growth exists for the given level of risk. This fund has consistently been one of the top funds in its sector as it returned growth of 1.33%, 26.35%, and 35.54% over the recent 1,3 & 5years. Over 10 years it has managed to return cumulative growth of 120.84%.

Of the 48 Life Funds analysed for this report 47.9% received a 1/2 star performance rating as they each performed worse than at least 50% of their competitors during the periods analysed.

As one of the biggest fund management brands in the UK, Royal London and their group of companies provide investors with access to a huge plethora of funds, some of which have consistently delivered exceptional returns, whereas others rank among the worst performers in their sectors.

64 of the funds analysed in this report have outperformed the majority of their peers over the past 5 years, which is a huge sum of top performers, more than any other fund manager in the UK. However, this only equates to 16.5% of the total funds analysed, with 261 Royal London funds ranking within the bottom half of their sectors for performance.

Royal London are undoubtedly one of the best fund managers in the UK, but do they really need so many funds? Their strategy of managing hundreds of funds has diluted their performance and makes it difficult for investors to identify their best options. Would their efforts therefore not be better served concentrating on managing a smaller but higher quality selection of funds?