The North American sector is an important asset class that is likely to form an integral part of many mid to higher risk investment portfolios.

Over the past 10 years, U.S equities have enjoyed one of the longest bull markets in history but a difficult last quarter in 2018 led many to believe it was the end of the good times for the region. But in the first 6 months of 2019, North American funds delivered the highest growth figures of any other asset class.

The North America sector is one of the most competitive on the market, with 1,126 funds (including all available share class options) classified within the IA North America and IA North American Smaller Companies sectors. Therefore selecting the most suitable funds in this asset class for your portfolio can be difficult for both investors and advisers.

In this report, we analysed the performance of all 1,126 funds within the IA North America and IA North American Smaller Companies sectors and feature 10 funds, that have consistently outperformed their competitors.

Investment markets endured a volatile 2018, with 81% of Investment Association sectors averaging negative growth for the year, including the North America sector which averaged returns of -1.51%. The last quarter of 2018 was a particularly difficult one for US equities with the IA North America sector averaging losses of -12.67% for the period. Yet despite ongoing trade tensions between the U.S and China, North American funds are back at the top of the performance charts with the sector averaging growth of 24.33% in the first 6 months of 2019.

The 10 North American funds featured below have been included due to their performance history. They are listed in alphabetical order. 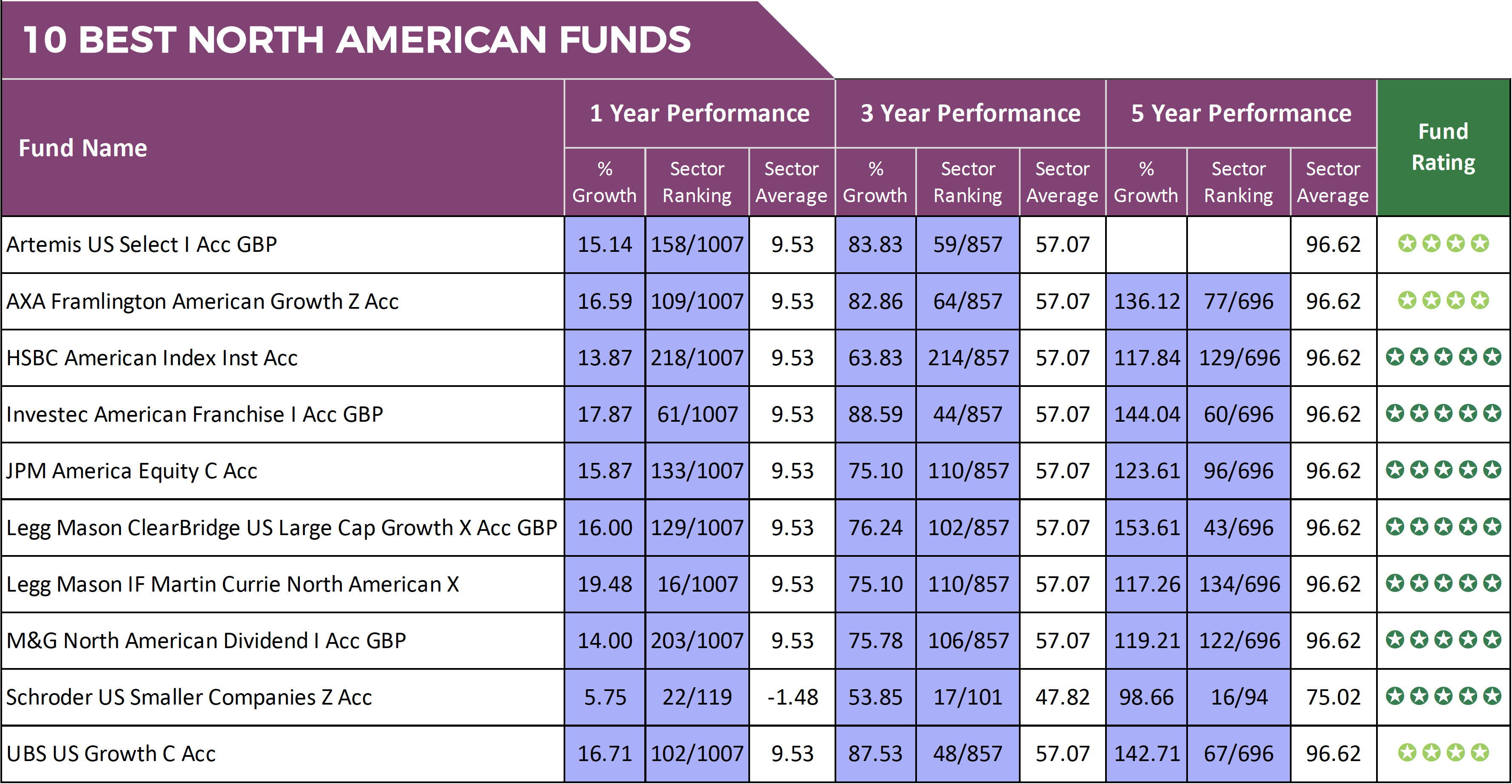 Although the Artemis US Select fund has slightly less than 5 years of history it is features on our list due to its ability to achieve cumulative growth of 138.14% since its launch on 19th September 2014 up until 1st July 2019. The fund has performed better than at least three quarters of funds in the same sector. Over the past 3 years, this fund has outperformed over 90% of funds within the IA North America sector with growth of 83.83%, well above the 57.07% sector average.

The AXA Framlington American Growth fund has consistently been one of the top-performing funds in the IA North America sector where over the past 10 years it has returned cumulative growth of 417.02%. This fund is primarily weighted in U.S technology companies with Microsoft representing their largest holding. Over the recent 1,3 & 5 years, the AXA Framlington American Growth fund returned growth of 16.59%, 82.86%, and 136.12%, each of which were consistently better than at least 89% of competing funds within the sector.

The HSBC American Index fund is one of the most popular funds in the sector and currently manages client assets of £4.5 billion. Similar to 6 of the 10 funds featured in this report, the HSBC American Index funds largest holding is in Microsoft, with Amazon and Apple featuring prominently. Over the past 1, 3 & 5 years this fund has consistently ranked in the top quartile of the IA North America sector with growth of 13.87%, 63.83% and 117.84%. For the past 10 years it has maintained a consistently competitive level of performance as it delivered cumulative growth of 393.75%.

The Investec American Franchise fund aims to provide long-term capital growth by investing primarily in the shares of US companies or companies which carry out a large proportion of their business activities in the US. The Fund focuses investment on companies deemed by the Investment Manager to be of high quality, typically those associated with strong brands or franchises.

In the 10 years since it launched in September 2002, the Investec American Franchise fund only managed to return 64.42%, which was below the 78.29% sector average for the period. However, despite its slow start, it has since been one of the top-performing funds in the IA North America sector.

Since its launch in January 2014, the JPM America Equity fund has consistently been one of the most competitive funds in the IA North America sector. For the past 1 month, 3 months, 6 months, 1 year, 3 year and 5 year periods it has performed better than at least 75% of its peers.

The fund's aim is to provide long term capital growth by investing primarily in a concentrated portfolio of Equity Securities of US companies. Currently, the majority of this fund is primarily weighted in the I.T, Financials and Healthcare sectors with holdings in companies such as Microsoft, Amazon, United Health and Mastercard.

Although this fund’s growth returns are not quite to the level of some of its peers it’s consistency and strong performance make it an attractive investment option.

The Legg Mason ClearBridge US Large Cap Growth funds objective is to generate long-term capital appreciation by investing at least 70% of its Net Asset Value in equity securities of a concentrated group of U.S companies with large market capitalisations. The core holdings of the fund will be in companies that the fund manager believes to be dominant in their respective industries, global in scope and that have a long-term history of performance.

This fund is one of the more volatile funds in its sector and as a result, was among the North American funds hit the hardest during the volatile and difficult last quarter of 2018 returning losses of -11.68%. However, it quickly recovered and in the first 6 months of 2019, it has achieved growth of 23.82%. Over the past 1 year period, its overall growth is 16%, which was better than 87% of North American funds and over 5 years it has returned growth of 153.61%, which outperformed 94% of its competitors.

The Legg Mason IF Martin Currie North American fund seeks to achieve capital growth through investment in the United States of America and Canada. Currently, the fund manager has primary holdings in Visa, Starbucks and AON, who are a global firm providing a broad range of risk, retirement and health solutions.

Although this fund launched in 1983, it is relatively small with funds under management currently totalling £163.47 million, which is somewhat of a surprise considering it has returned growth of 2167.81% since its launch.

The M&G North American Dividend fund invests in the shares of North American companies that its fund manager believes have the potential to grow over the long term (that is, over five years or more). The fund’s manager selects stocks with different drivers of dividend growth with the aim of constructing a portfolio that has the potential to cope in a variety of market conditions.

This fund invests at least 80% of its assets in equities of small-sized US companies. These are companies that, at the time of purchase, are similar in size to those comprising the bottom 20% by market capitalisation of the North American equity markets.

Since its launch in February 1990, the Schroder US Smaller Companies fund has amassed funds under management of £863.55 million.

As its primary holdings are in smaller U.S companies it typically assumes more volatility than funds in the IA North America sector where the funds primarily invest in large U.S companies with an expansive global presence.

Performance-wise, North American smaller companies funds have not enjoyed the same levels of growth as the larger and more competitive North America sector.

As a consequence, the Schroder US Smaller Companies fund returned growth of 5.75%, 53.85% and 98.66% for this past 1, 3 & 5 year periods, which were consistently among the very best in the IA North American Smaller Companies sector.

Since its launch in November 2008, the UBS US Growth fund has remained a relatively small fund with funds under management totalling £222.3 million. However, it has consistently been one of the top-performing funds in the sector and since its launch just under 11 years ago it has returned impressive growth of 485.71%.

The Best US Equity Funds

North American equities have consistently been among the most competitive and volatile asset classes, but in recent years, it has also been one of the most rewarding for investors.

Over the past 5 years, the IA North America sector has had the 2nd highest average growth returns of the 36 Investment Association sectors, behind only the IA Technology & Telecommunications sector, which reflects the sizeable influence the sector has on how well the portfolios of many UK investors perform. But like any sector, there are funds that perform poorly, those that perform moderately and those that excel.

Consistency is a crucial component that successful fund managers must achieve and the 10 funds featured in this report have been among the most consistent and best performing funds in the IA North America and IA North American Smaller Companies sectors. Although future performance is never guaranteed it is reasonable to assume the funds which have proven their consistency over a 5 year period will continue to go on and outperform their peers.

Each of the 10 funds featured in this report has consistently proven their ability to excel by delivering growth over the recent 1, 3 & 5 year periods that was better than at least three-quarters of all other funds in their sector.