5 Funds that have capitalised on Americas longest bull market

U.S equities have been the primary driver of world equity markets so far in 2018, as emerging markets battle with trade woes, European growth continues to slow, and Brexit clouds the outlook in the UK. The US economy continues to fly, with tax reforms benefiting companies and interest rates rising.

Having surpassed the longest-ever recorded bull market in August 2018, investors in US equities will have witnessed a decade of steady growth despite some serious challenges.

However, funds in the Investment Association North America sector saw outflows of £700 million in July, the most in a single month in three and a half years.

Although more investors cashing in their US Stock to potentially reduce the risk of their portfolios, North America continues to thrive and offer exceptional growth opportunities with average growth of 4.87% in the month up to 1st August 2018 and growth of 15.24% in the recent 6-months.

However, with 137 main unit funds in the IA North America sector, which expands to almost 1,000 when you take into account all available share classes, it can be difficult to invest efficiently in the funds with the strongest performance.

In this report, we focus on 5 IA North America funds that have not only performed strongly in recent months, but they have also been among the most consistent and best performing funds in the North America sector over the past 1, 3 & 5-year periods. 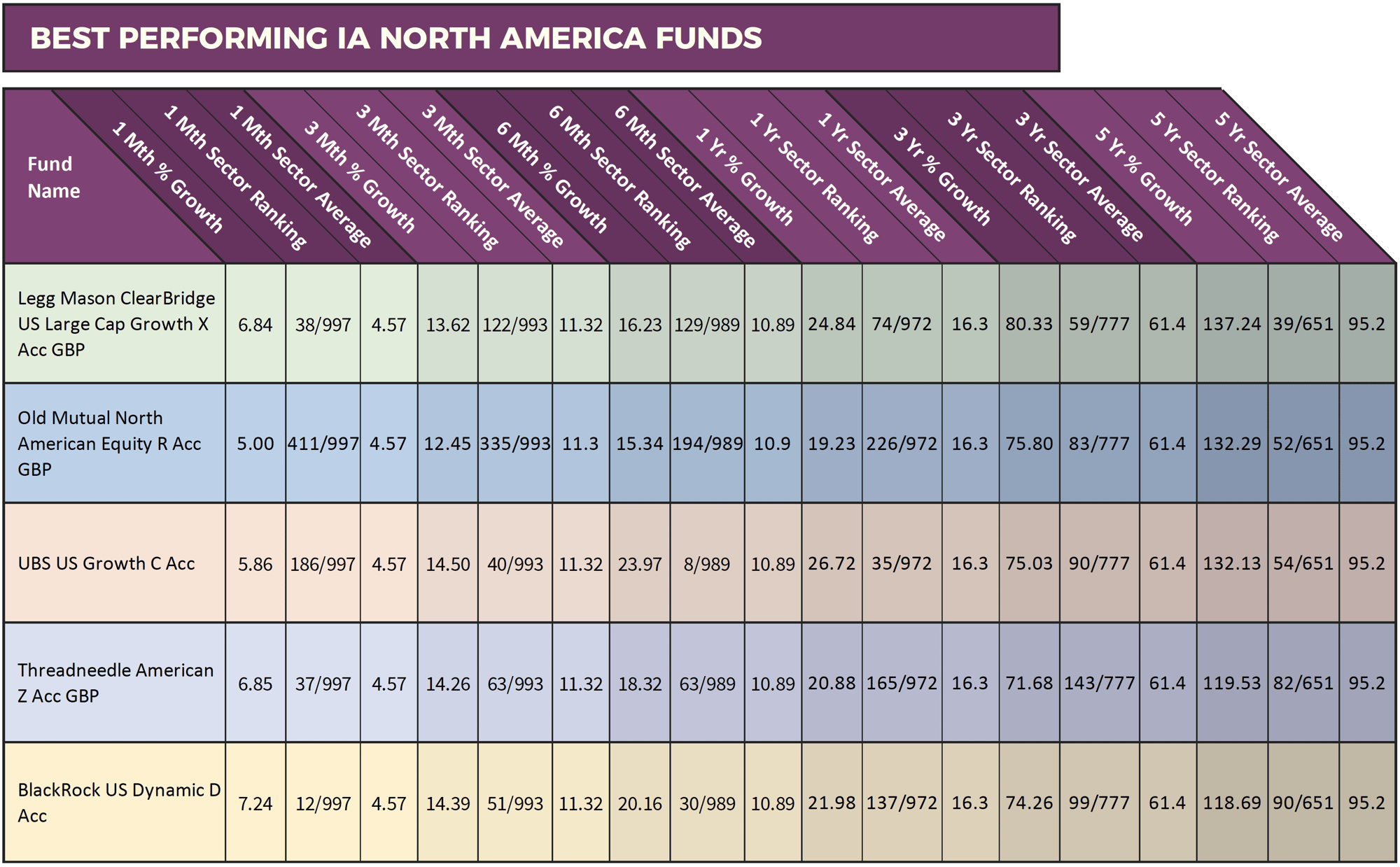 The Legg Mason ClearBridge, US Large Cap Growth fund, invests mainly in stocks with large market capitalisations. Many of these companies are household names and are strategically positioned for growth in the US and overseas, with the fund manager diversifying across industries to help gain an appropriate balance of risk and reward.

The fund launched in 1999 and currently manages some £1.2 billion of client money, and it is one of only a small proportion of funds in the IA North America sector that has continually delivered exceptional performance in recent months and years.

In the one month period up to 1st August 2018, this fund had growth of 6.84%, and in the 3 months, 6 months and 1, 3 & 5-year periods up that date the Legg Mason ClearBridge US Large Cap Growth fund has consistently outperformed at least three quarters of all other funds in the IA North America sector.

The Old Mutual North American Equity fund has continually been a favourite with UK investors who to date have placed more than £3.1 billion into this fund.

This actively managed fund invests primarily in large information technology firms such as Apple and Microsoft, as well as large Healthcare and industrial companies.

The UBS US Growth Fund launched on 10 November 2008 and is managed by a highly experienced team based in New York. It also focuses primarily on US-based, worldwide companies such as Microsoft, Amazon, Home Depot and VISA.

This fund has been one of the best performing funds in the North America sector in 2018 with six months growth up to 1st August 2018 of 23.97%, which was better than 99% of all other funds in the same sector.

Similar to the other funds focused in this report, the UBS US Growth fund has displayed consistent top quartile performance in the IA North America sector, and it has returned cumulative growth of 26.72%, 75.03% and 132.13% over the recent 1, 3 & 5-year periods.

The Threadneedle American fund is another North America fund that has a strong history of outperforming its sector peers. This popular fund currently manages £2.6 billion of client funds and invests at least two-thirds of its assets in shares of medium to large companies in North America or companies that have significant operations there.

This fund has returned cumulative growth of 320.44% in the ten year period up to 1st August 2018, which was well above the average sector growth for the same period of 260.04%.

In the six month period between 1st February 2018 and 1st August 2018, the Threadneedle American fund had growth of 18.32%, which was higher than 94% of all other funds in the IA North America sector.

The BlackRock US Dynamic fund invests primarily in companies incorporated, or listed on a stock exchange, in the United States. This fund also looks out for investment opportunities in companies that in the fund managers opinion is undervalued (i.e. their share price does not reflect their underlying worth) or have good growth potential.

Compared to the four other funds featured in this report the BlackRock US Dynamic fund has returned the lowest growth over the recent 1, 3 & 5-year periods. However, this fund has continually outperformed the sector, and it has maintained its consistency in 2018, where it is among the top performers in the sector.