Independently owned, Artemis is a relatively small wealth management firm in comparison to some of their competitors. Despite their size, their wealth management approach has earned them multiple awards and gained them widespread recognition throughout the industry and with investors.

Like most wealth management firms, 2018 hit Artemis hard. Many sectors averaged heavy losses and with uncertainty as to when the markets would improve a proportion of investors chose to move their investments into cash. As a consequence, Artemis’ total funds under management reduced from £27 billion in May 2018 to £21.3 billion in January 2019.

We analysed 26 Artemis funds for performance and sector ranking over the past 1, 3 & 5 year period up to 1st January 2019. This analysis shows a sizeable drop off in performance from a large proportion of their funds, and it also highlights the Artemis funds that have continued to excel. 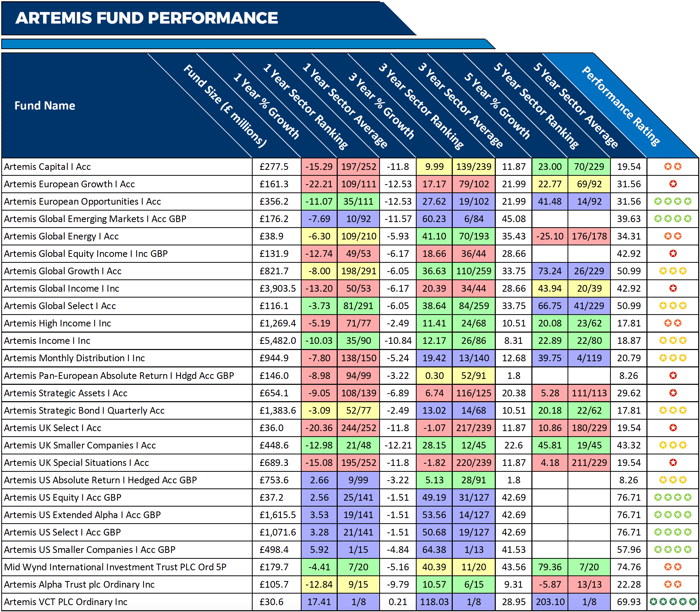 Fund performance up to 1st January 2019

The Artemis Venture Capital Trust has comfortably been their highest growth fund over the past 1, 3 & 5-years with cumulative growth of 17.41%, 118.03%, and 203.10% respectively, which was consistently the highest in its sector. Despite its lofty returns this fund currently has just over £30 million of total assets, which is the lowest from their range of funds.

In contrast, the £5.48 billion Artemis Income fund is the largest fund under their management. This fund has been unable to deliver top quartile sector performance, but over the past 1, 3 & 5 years it was consistently better than at least half of its sector peers.

Another Artemis fund that has consistently been competitive was their European Opportunities fund. This fund returned cumulative growth of 41.48% over the past 5-years, which was well above the 31.56% sector average, and better than 85% of competing funds in the same sector.

Among the most impressive funds from Artemis was from their relatively young range of US funds.

Launched in October 2014, the £498 million Artemis US Smaller Companies fund has excelled in the small but competitive North American Smaller Companies sector. Over the recent 1-year and 3-year period this fund returned cumulative growth of 5.92% and 64.38%, which were the highest in its sector.

The £1.6 billion US Extended Alpha fund has also been among the best performers in the North American sector. This fund returned 3.53% and 53.56% over the past 1 and 3 years, which was well above the sector average and better than at least 87% of competing same sector funds.

Sitting in the North American sector alongside the US Extended Alpha fund was the Artemis US Select fund. This fund has also excelled with its 1 and 3-year returns of 3.28% and 50.68%, coming in just below that of its sister fund.

The Artemis Global Income fund is a popular fund that holds almost £4 billion of client assets, yet it has consistently struggled for performance in comparison to its peers. Over the 12 months, this fund returned losses of -13.20%, which was worse than 94% of the funds in its sector. Its 3-year returns of 20.39% were also well below the sector average of 28.66% and worse than 77% of its competitors.

Another Artemis fund to struggle was their UK Special Situations fund. This fund holds £689 million of funds under management, yet it has consistently been among the lowest growth funds in the UK All Companies sector. Over the past 5-year period this fund returned cumulative growth of 4.18%, which ranked a lowly 211th out of 229 funds.

The Artemis Strategic Assets fund has also persistently struggled. Over the recent 5-years, this fund returned growth of 5.28%, which was more than 5 times below the sector average and worse than 98% of its peers.

2018 was undoubtedly a difficult year for Artemis. The majority of their funds suffered a sizeable drop off in performance compared to their peers, which by the end of 2018, had a significant impact on their cumulative performance over the 1, 3 & 5-year periods analysed.

Some of their funds have consistently struggled, yet, despite the difficulties of the past year, 7 have managed to return top quartile sector performance, as their range of US funds continued to excel.