Fidelity International was established in 1969 and globally they are responsible for managing more than £317 billion for over 2.4 million clients across the Asia Pacific, Europe, the Middle East, and South America.

Since their first UK office opened in 1973 they have secured more than 1 million UK clients with many investing in Fidelity’s range of funds and investment trusts.

In this review, we analysed the recent 1, 3 & 5-year performance and sector ranking for 59 Fidelity unit trust & OEIC funds, as well as their 5 investment Trusts.

Our analysis identifies the Fidelity funds that have consistently been among the best performing funds in their sector, as well as those that have underperformed when compared to their peers.

The 1, 3 & 5-year growth and sector ranking of each fund is also colour coded to identify their quartile performance within their sectors during each of the periods analysed.

To help ensure both their client and fund manager interests are aligned Fidelity follow a policy of compensating fund managers on their long-term performance, with many of these fund managers selected through their portfolio manager academy programme. With rigorous processes in place to help deliver for their investors, we analysed a total of 64 funds and investment trusts over the 1, 3 & 5year period up to 1st July 2019.

Our analysis identified that an impressive 18 of their funds received a strong 4 or 5-star performance rating, with 11% of their funds consistently outperforming at least 75% of competing same sector funds over each of the periods analysed.

Fidelity manages a diverse range of funds with a proportion consistently performing better than the majority of their competitors. Below we feature some of their top performers. Over the 1, 3 & 5 year periods analysed each of these funds have consistently returned growth that was better than at least 75% of competing funds within their sectors. 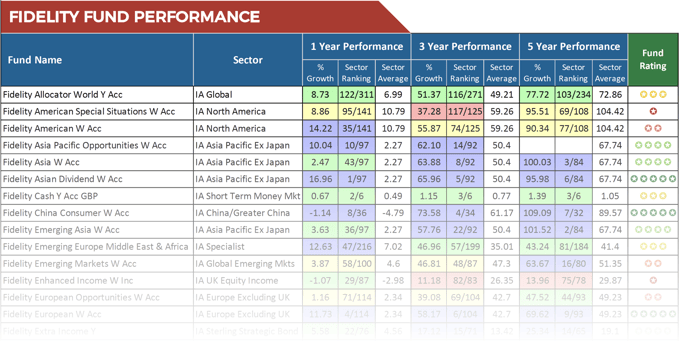 The Fidelity European fund has been active since 1985 and has become one of the most popular in the IA Europe Excluding UK investment sector with funds under management of £2.66 billion. The fund invests primarily in the shares of medium-sized and smaller companies within continental Europe, and currently it has holdings in Nestle, Total, L’Oreal and SAP.

The Fidelity UK Select fund is classified within the IA UK All Companies sector with the majority (84%) of its assets held in UK companies. Over the past 5 years, this fund has returned growth of 54.37%, which was significantly greater than the 36.05% sector average for the period and higher than 87% of funds within the sector.

This fund has continuously proven to be one of the best performing funds in the sector and over the past 10 years, it has delivered growth of 205.64% compared to the sector average of 162.71%.

With assets under management of £50 million the Fidelity Asian Dividend fund is one of the smallest in the IA Asia Pacific excluding Japan investment sector. However, since this fund launched in August 2013, it has consistently been one of the sectors top-performers.

The Fidelity Asian Dividend fund has continuously proven its quality and since its launch, it has managed to return growth of 111.10% compared to the 78.72% average for the same period.

The Fidelity Institutional UK Long Corporate Bond launched in February 2002, and up until 1st July 2019, it has managed to deliver growth of 207.09%. This is particularly impressive for a relatively low-risk fund especially as its sector averaged significantly less growth of 111.05% for the period.

In more recent years this fund has also excelled. Over the past 1, 3 & 5 years it has returned growth of 9.54%, 22.46% and 45.51%, each of which were comfortably higher than the sector average and better than at least 95% of all other funds within the same sector.

As identified in our analysis, Fidelity has a large selection of funds across a wide range of asset classes that have a history of consistent top quartile sector performance.

With such a large range of funds, it is inevitable that a proportion will have struggled compared to their peers, and the following funds listed below represent a proportion of their funds that have experienced disappointing performance over the recent 1, 3 & 5 years.

The largest fund currently managed by Fidelity is their Moneybuilder Income fund which manages over £3.2 billion of client assets.

The fund aims to provide an attractive level of income primarily through exposure to sterling-denominated bonds. However, over the recent 3 & 5 years, this fund returned growth of 12.77% and 26.74%, which ranked within the bottom 50% of performers in its sector.

The Fidelity Moneybuilder Balanced fund launched in February 1993 and currently manages £419 million of client assets. This fund invests primarily in the UK through exposure to a combination of UK government and corporate bonds and other fixed interest securities, as well as company shares including preference shares and convertibles.

Over the periods analysed this fund has consistently been one of the worst performers in its sector, and for the recent 5 year period it delivered growth of 22.05%, which ranked 116th out of 119 competing funds.

The Fidelity UK Opportunities fund is 1 of 256 funds within the competitive UK All Companies sector. The fund launched in 2011 and currently holds just under £500 million of client money. The fund invests mainly in shares of UK Companies with BP, Prudential, AstraZeneca and WH Smith featuring as some of its primary holdings.

This fund has struggled for competitive performance in recent years with its past 1, 3 & 5 year growth returns ranking below the sector average. Over the recent 12 months, this fund has particularly struggled as it returned negative growth of -14.01%, which ranked 250th out of the 256 funds. Although this fund has experienced a difficult few years, it has still managed to return more than the sector average since its 2011 inception.

Arguably the most disappointing fund managed by Fidelity is their Enhanced Income fund. This fund currently manages £282 million of client assets and it has consistently been one of the worst performers in the IA UK Equity Income sector, not only in recent years but since it launched in February 2009.

Fidelity also manages a small range of Investment Trusts that provide exposure to companies across Asia, China, Europe, Japan and the UK.

Asia is the world’s fastest-growing economic region and the Fidelity Asian Values IT looks to capitalise on this by favouring good, small companies. Fidelity believes this strategy will give them the best opportunity to find mispriced businesses before they become well known.

Over the past 10 years, the Fidelity Asian Values IT has delivered impressive growth of 293.07% compared to the sector average of 234.85%. Over the recent 5 year period, it has continued its competitive performance by returning growth of 112.67%, which was also well above the 87.66% sector average.

The Fidelity China Special Situations IT is the UK’s largest China investment trust and it is run by Fidelity’s large Asia-based investment team who they believe are best placed to identify companies that are most likely to benefit from China’s growth and changing economy.

The region is still recovering from a difficult 2018 and over the past 12 months, the trust returned losses of -10.40%, which was particularly disappointing as the rest of the sector averaged 1.22% for the period. However, over the past 5 years, it has managed to return growth of 132.99% compared to the 102.09% average.

Japan’s economy is the third-largest in the world and is the world’s second-largest developed economy and the Fidelity Japan Trust PLC aims to be the key investment of choice for those seeking Japanese companies exposure.

In 2018, Fidelity Japan Trust PLC changed its name from Fidelity Japanese Values PLC, which it had been called for the previous twenty-four years. The new name coincided with a change of its investment policies allowing greater investment into large-companies, moving away from its previous exclusive focus on small-companies. The trusts change in strategy is not surprising given its long term uncompetitive performance

The Fidelity European Values Investment Trust invests predominantly in continental European equities but up to 20% of gross assets may be invested in companies outside of the continent. The trust aims to grow dividends over a 3 to 5-year horizon through a strategy of holding a fairly concentrated portfolio of between 40 to 50 diversified stocks with no bias to a particular sector or company size.

This trust has consistently maintained strong performance and over the recent 1, 3 & 5 year periods it has returned growth of 15.86%, 69.87% and 76.91%, which were all considerably better than the sector average.

Focused on the UK market but with up to 20% invested in overseas stock markets, this investment trust looks for stocks that Fidelity believe to be undervalued by the market and therefore offer greater growth potential. This trust has a good performance history and over the past 10 years, it has returned growth of 268.56% compared to the 167.62% sector average. Over the 1, 3 & 5 year periods analysed it has also outperformed the sector average with returns of -3.94%, 42.93% and 56.33% respectively.

Fidelity provides investors with access to a substantial range of investment opportunities. Thorough research is recommended to identify which funds are competitive and non competitive within their relevant sectors.

Although underperformance has impacted some Fidelity funds, our analysis also identifies a selection of their funds that have proven their ability to deliver competitive returns on a consistent basis. These top-performing funds have continually ranked among the best in their sectors, and combined with Fidelity’s specialist investment teams located throughout key global markets, they offer some of the most attractive investment opportunities for UK investors.