Founded in 1981, Hargreaves Lansdown is the biggest fund supermarket in the UK, and its success has seen it grow to become a FTSE 100 company.

They have more than 983,000 active clients and look after almost £82bn worth of their money. They are one of the biggest success stories in Britain’s financial services industry. What started as a DIY fund supermarket is also now a robo-adviser, fund manager and pension platform, and it’s just announced plans to add peer-to-peer business lending to its rapidly expanding range of services.

The Bristol-based firm generated a whopping £385.6 million in income for the year ending 30 June 2017. But what has surprised many onlookers is that almost a third of HL’s revenue has come from their endeavours as a fund manager - more specifically, from the ongoing annual fees they generate from the £9 billion of investor money they hold within their range of relatively new funds.

With the huge revenue gained from their funds in such a short period of time, and the recent launch of more funds, is Hargreaves Lansdown’s future as a fund manager instead of a fund supermarket? 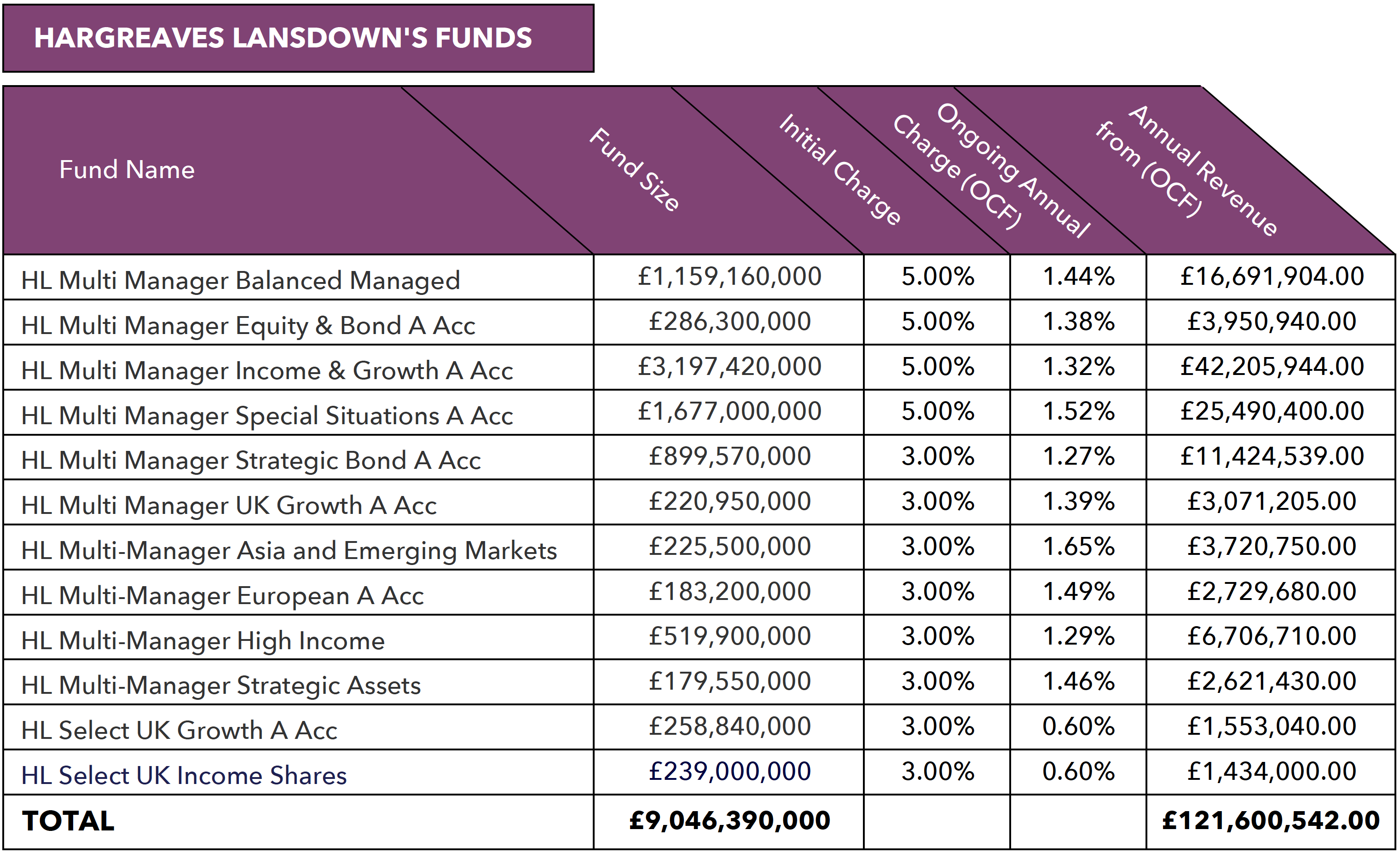 These changes forced HL to create a new charging model which had to be competitive to keep consumers away from other fund supermarkets; this benefited consumers as it helped to drive costs down even further. But these changes have had a considerable impact on the level of fee income Hargreaves Lansdown receive from their fund supermarket platform.

The new fee structure for fund supermarkets placed limitations on their revenue potential, but by diversifying into fund management, Hargreaves Lansdown has opened up a new revenue stream that could potentially become their most significant source of income.

As a fund supermarket, Hargreaves Lansdown has developed a platform that provides investors with access to thousands of different brands of funds, and their online platform consistently attracts a massive influx of visitors and regular clients. Because of this, they have become a brand that consumers are familiar with, and it is their influence and ‘clout’ with investors that have helped their range of funds to quickly establish a strong foothold in the market and grow in size.

It is therefore not surprising that 2 of the ten biggest selling funds on Hargreaves Lansdown are their own brand of funds – the ‘HL Multi-Manager Income & Growth’ and ‘HL Multi-Manager Special Situations’ funds. Combined these two funds hold over £4.8 billion and based on their current size, their annual management charges alone would generate Hargreaves Lansdown income of £67.7 million each year - which is almost 18% of their total annual revenue.

How have Hargreaves Lansdown funds been performing?

Lee Gardhouse, Hargreaves Lansdown’s Chief Investment Officer, claims their multi-manager funds “invest in a selection of what we believe are the best funds available. Each aims to provide broad exposure to an entire sector within a single, convenient investment”.

Although Hargreaves Lansdown is generating huge revenue from their range of funds, for their investors, their funds have not been performing well. In particular, the past several months has been disappointing for their entire range of funds.

As Hargreaves Lansdown are relatively new to fund management only 5 of their funds have been active for over five years, 2 of which have returned 5-year growth that was greater than 75% of competing same sector funds.

However, the ‘Hargreaves Lansdown Special Situations’ fund has consistently struggled to be competitive within its sector. Despite this, it remains a popular choice among investors, and it is Hargreaves Lansdown’s 2nd largest fund holding over £1.67 billion of investor savings. Over the recent 5-year period this fund returned growth of 90.28%, which was well below the sector average of 97.82%, ranking it a mediocre 38th out of 63 funds in its sector for growth.

The ‘HL Multi-Manager Income & Growth’ fund, which holds £3.2 billion, has been a moderate performer returning 5-year growth of 69.08%, which although above the average for its sector, it was still significantly lower than the 113.88% returned by the consistently top performing ‘CF Miton UK Multi Cap’ fund, which competes within the same investment sector.

size, their annual management charges alone would generate Hargreaves Lansdown income of £67.7 million each year - which is almost 18% of their total annual revenue. 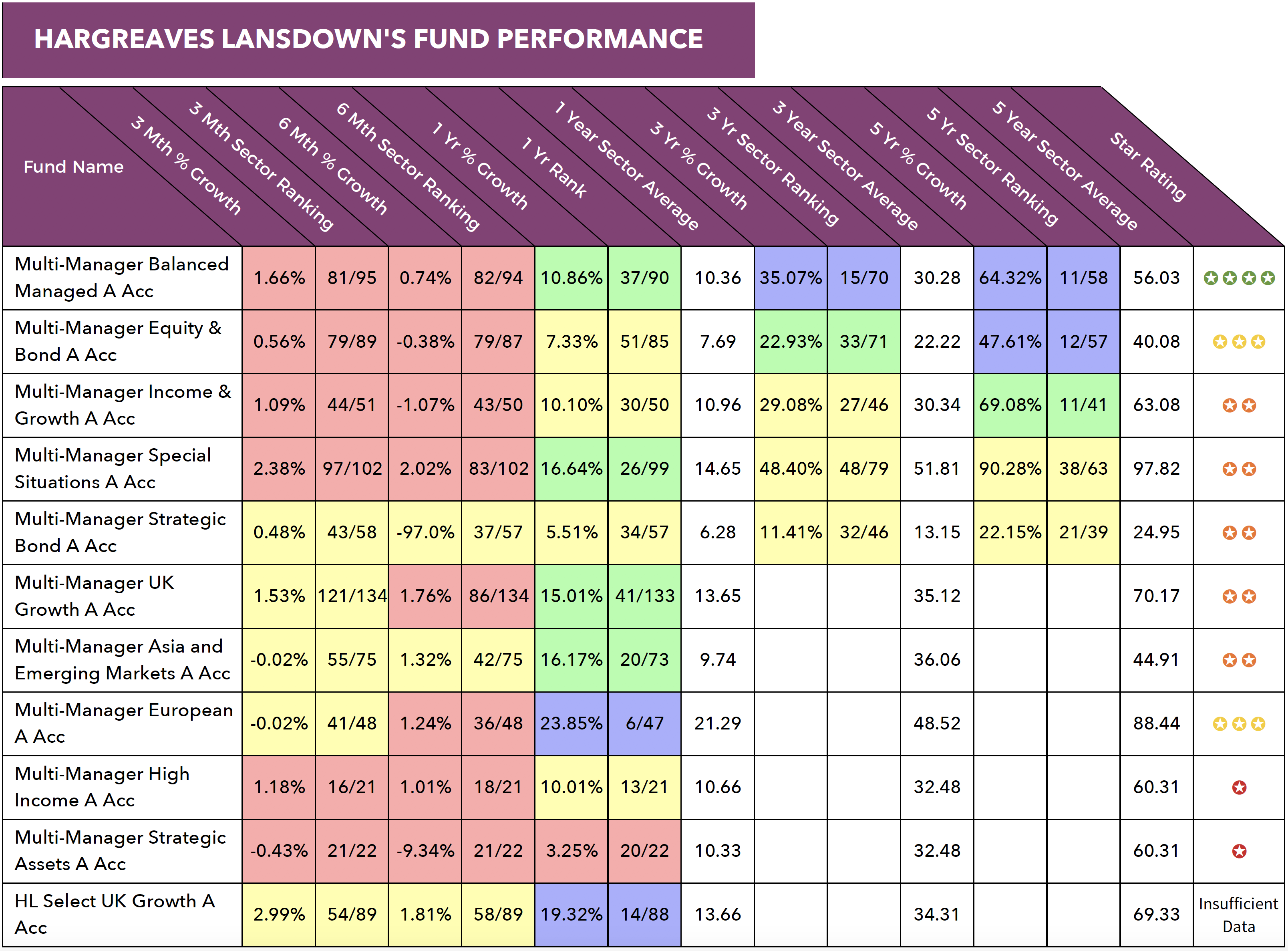 As the UK’s biggest fund supermarket Hargreaves Lansdown, have become an influential authority within the investor community – and as they branch out, their popularity will help them quickly become a major force within the lucrative fund management arena.

Although they are relative novices to fund management, their small range of funds already generates them an annual income that makes up 31.5% of their total revenue. With such success, Hargreaves Lansdown will likely place more and more emphasis on the fund management side of the business as they continue to grow. For investors, this will open up more investment opportunities but as demonstrated in the performance review of Hargreaves Lansdown funds, their performance has not been particularly competitive -  and currently there are better performing investment funds on the market.

View the performance and sector ranking of all funds competing with Hargreaves Lansdown in the top funds list. This list details the recent 1, 3 & 5-year growth of over 3,000 funds that have been classified by the investment association.