The unprecedented economic fallout of the past few months has had a huge impact on investors. As markets fell, so too did the value of portfolios with year’s worth of gains eroded in days. For some investors, the poor quality of their investment funds exacerbated the impact of the downturn and resulted in their portfolios experiencing an even steeper decline in value when compared to the market average.

The crash, and the impact it has caused has prompted many self-investors in particular to reassess the quality of their funds with focus on strengthening their overall portfolios.

A short list of favourite funds from prominent investment houses will influence the fund choices of many self-investors – none more so than the recommended short list of funds provided by Hargreaves Lansdown, the UK’s largest fund supermarket.

The motives of such lists have been called into question and there are concerns over the extent of their influence with investors. But how have the funds the Wealth 50 list promotes performed?

In this report, we analyse the 53 funds contained in Hargreaves Wealth 50 and assess the performance of each fund against all other same sector competing funds over various time periods. The Hargreaves Lansdown Wealth 50 is one of the most popular recommended funds list in the UK. Despite its clout with investors, the Wealth 50 list (formerly known as the Wealth 150) has continually been under the spotlight with concerns over the quality of the funds the list promotes and potential arrangements with fund providers, most notably the close ties between Hargreaves Lansdown and Neil Woodford.

Among those to voice concerns over Hargreaves Lansdown’s motives for the inclusion of funds in their Wealth 50 list was Terry Smith, the manager of the UK's largest investment fund, the Fundsmith Equity fund. According to The Times, Mr Smith, accused HL of recommending funds based on their potential to maximise the fund supermarket's profits rather than their ability to outperform for clients.

At the start of May this year Hargreaves Lansdown announced their intention to scrap their Wealth 50 list and replace it with a new Wealth Shortlist of funds overseen by an independent panel. It is not yet clear when they intend to do this, but as of now the Wealth 50 list remains active and continues to be one of the most influential drivers in fund choices among self-investors.

We have provided each fund with a performance rating between 1 and 5 stars, with 1 representing the lowest rating and 5 representing the highest. The criteria for these ratings are defined below. 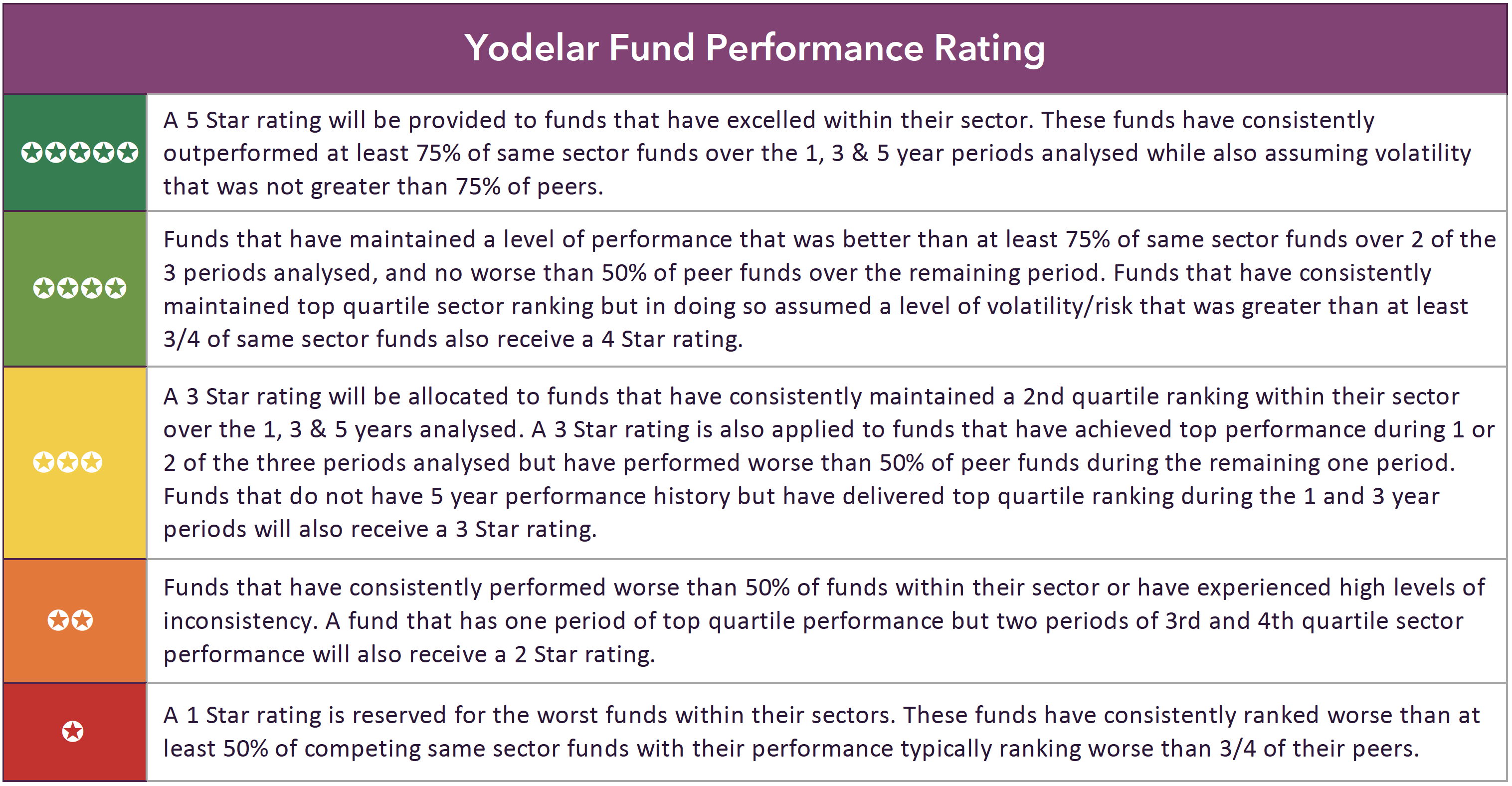 The Wealth 50 list contains a total of 53 funds across several different asset classes that Hargreaves Lansdown believe have the most potential in each sector.

Yet despite their inclusion, our analysis identified that 42% of the funds listed in the Wealth 50 have ranked among the worst performers in their sectors over the past 1, 3 & 5 years.

The 53 funds featured in the Wealth 50 list are classified within 1 of 20 different investment sectors.

As an example 2 of the 53 featured funds are classified within the IA Japan sector. They are the Man GLG Japan Core Alpha fund and the iShares Japan Equity Index fund.

Although they represent Hargreaves Lansdown’s favourite Japanese funds, they both have a history of poor performance in comparison to their peers. Over the past 12 months the Man GLG Japan Core Alpha fund managed to return painful losses of -19.64% even though the average within the sector for the period was -2.54%. This poor performance saw the fund rank 489th out of 492 in the IA Japan sector, which begs the question as to why it has been included in the Wealth 50 list? It wasn’t just the recent year were this fund has struggled. Over the past 3 & 5 years its returns of -17.91% and 5.22% ranked among the worst in the sector and well below the average for these periods.

There are numerous other funds with a poor performance history that Hargreaves Lansdown promote to investors as their favourites within different sectors.

There are certainly questionable inclusions in the Wealth 50 list one of them being the relatively young and unproven Jupiter Global Value Equity fund, which is classified within the IA Global sector. In its short history this fund has performed poorly. Over the past 12 months is returned losses of -19.10% which was worse than 93% of the funds in the same sector.

The Edentree Higher Income Fund is another fund featured within the list that has consistently ranked among the worst in its sector for performance.

Making Fund Choices Based On Facts Not Opinions

Our research demonstrates that  the Wealth 50 list should not hold much influence when it comes to fund selection - It should be viewed as a list that is based on opinion rather than proven quality.

More informative decisions can be made by identifying quality funds and fund managers based that demonstrate consistent top performance within their Investment Association sector. By comparing the performance of a fund alongside their peers (other funds classified within the same sector) investors are presented with data that clearly identifies the quality of funds and fund managers, from which decisions can be made that are backed up by data.

Hargreaves Lansdown’s Own Range of Funds

Our analysis of these funds identified that all but 2 of their multi manager funds have consistently performed below the sector average with some ranking among the very worst in their sectors. 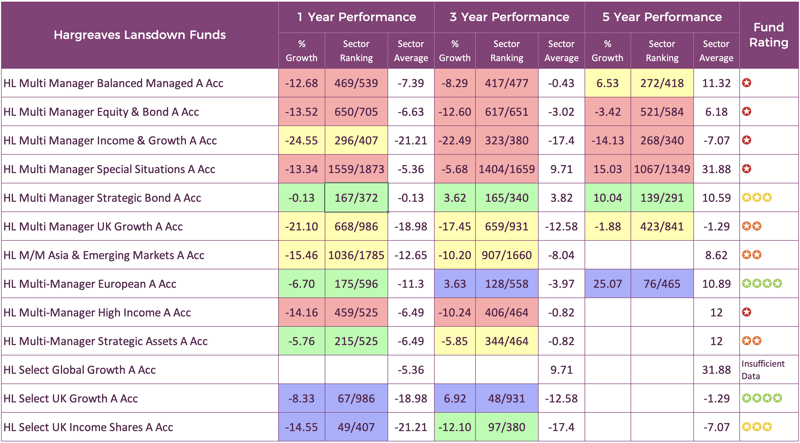 Not all of their funds have been uncompetitive, the Multi Manager European fund has persistently performed above the sector average and over the recent 5 years it returned cumulative growth of 25.07% which was better than 84% of funds in its sector.

The best performance has come from Hargreaves Lansdown’s Select funds which are their newest range of funds. In stark contrast to HL’s Multi Manager fund range, all of these funds have outperformed the sector average for each of the periods analysed. Indeed, the HL Select UK Growth fund was one of only a small selection of funds to deliver positive returns in the UK All Companies sector over the past 3 years with its returns of 6.92% outperforming 95% of funds in that sector.

Hargreaves Lansdown have also put together a range of readymade, risk rated portfolios that have proven to be popular with many investors who do not wish to seek financial advice but lack the time or expertise to manage their investments effectively. Each of these portfolios are made up entirely from a selection of Multi Manager funds, which as we have identified have struggled for competitive performance which has impacted the returns of these portfolios compared to similar risk portfolios from Yodelar Investments which contain funds that have consistently outperformed the majority of their peers.

As identified from our analysis, many of Hargreaves Lansdown’s favourite funds have a history of poor performance over both the short and medium term with considerably better performing and more consistent alternatives available.

It is important investors research sectors and identify the consistently better performing sector funds in order to maximise growth, and invest efficiently.