Investec regard themselves as a specialist bank and asset manager that manage £166.5 billion of client assets globally. With more than 10,500 staff in offices across five continents Investec service clients from across the world, but it wasn’t until 1992 when Investec entered the UK.

Since then they have expanded through a combination of organic growth and strategic acquisitions which has helped grow Investec Asset Management to become one of the most popular and respected asset managers in the UK.

This analysis identifies that 38 of the 52 Investec funds returned losses over the past 12 months, and 57.7% performed worse than at least half of all other funds in the same sectors during the recent 5-year period.

How We Rate Performance

The 1, 3 & 5-year growth and sector ranking of each fund is also colour coded to identify their quartile performance within their sectors during each of the periods analysed.

Each sector classified fund is then provided with an overall performance rating based on their comparative performance. Funds with a 1 or 2-star rating have a history of poor performance by consistently delivering returns that are below the sector average and worse than at least 50% of their peers. Whereas the funds with a 4/5-star rating have continually provided returns that have outperformed the majority of their peers. 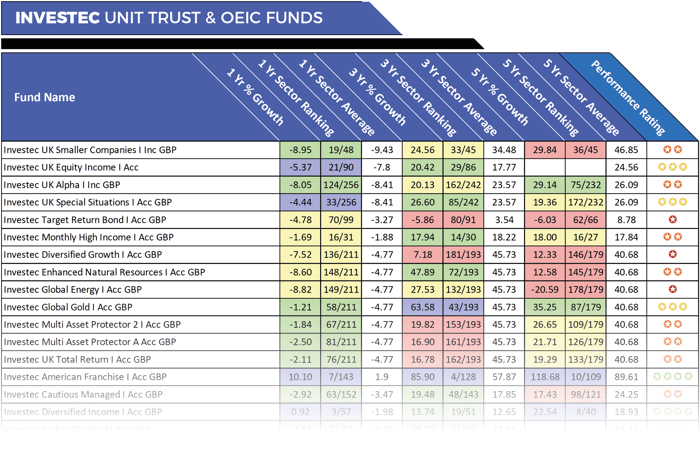 One of the top performing Investec funds was their American Franchise fund, which currently holds a modest £227 million of client assets. Although modest in size, this fund has consistently outperformed the majority of its peers in the very competitive IA North America sector. Over the recent 12 months, this fund returned growth of 10.10%, which was better than 95% of competing funds in the IA North America sector. Its 3 & 5-year growth of 85.90% and 118.68% was also among the best returns in its sector and well above the 57.87% and 89.61% sector average for the periods.

Another Investec fund that has performed comparatively well was their Global Franchise fund. This fund is managed by Clyde Rossouw who has been given an unrestricted mandate to invest in companies of any size or industry, or geographical location. Over the recent 5-year period this fund has returned growth of 94.55%, which was comfortably higher than the 60.77% sector average and better than 97% of its peers. In recent months it has also been impressive returning growth of 4.90% this past year when its competitors within the same sector were averaging losses of -3.62%.

57.7% of Investec Funds Have Underperformed Their Peers During The Recent 5-year Period

The Investec Global Special Situations fund has some of the highest growth returns in its sector over the recent 3 & 5-year periods, but a horrid end to 2018 saw this fund fall dramatically down the sector ranking. Over the recent 12 months this fund has returned losses of -6.49%, which ranked 229th out of 296 funds.

30 of the 52 Investec funds analysed received a poor 1 or 2-star performance rating as they have each consistently performed worse than the majority of their peers. The largest of their funds to perform poorly was the Investec Diversified Growth fund, which currently holds some £2.3 billion of client assets. This fund has consistently underperformed, and over the recent 12 months, it returned negative growth of -7.52%. Over the past 5 years, this fund has returned cumulative growth of 12.33%, which was well below the 40.68% sector average and worse than 82% of competing funds within the same sector.

One of the most disappointing funds managed by Investec has been their The Investec Target Return Bond. This Fund invests around the world primarily in a wide range of bonds, and it aims to produce a positive return above overnight GBP LIBOR over rolling 3-year periods regardless of market conditions. Despite Investec’s objectives for this fund, it has consistently lost money for its investors, and over the recent 1, 3 & 5-year periods it returned negative growth of -4.78%, -5.86% and -6.03% respectively. These returns were not only well below the sector average for the periods, but they were also among the worst in their sector. 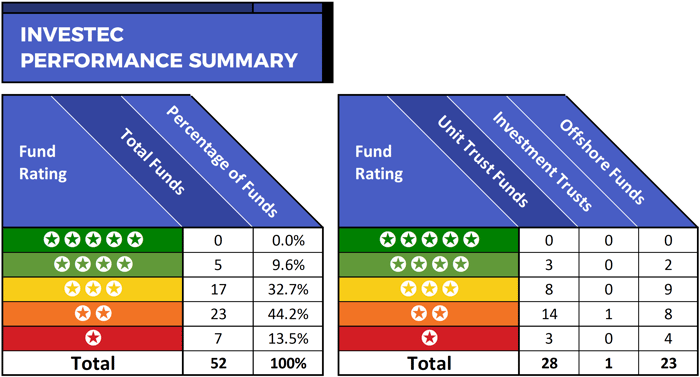 Our analysis rated 57.7% of Investec funds to have a lowly 1 or 2-star performance rating as they struggled to deliver competitive returns consistently,

with a proportion providing competitive returns over limited periods.

Fluctuating sector rankings show a lack of consistency from Investec funds, and only their American Franchise fund was able to outperform its peers over all three periods consistently.

However, what is positive is the fact that 15% of their funds returned top quartile sector ranking in what was a particularly challenging 12 months. But it remains to be seen whether or not they can maintain this level of performance going forward and deliver returns that exceed those of their competitors.