Keep your final salary pension or cash in –   which is right for you? 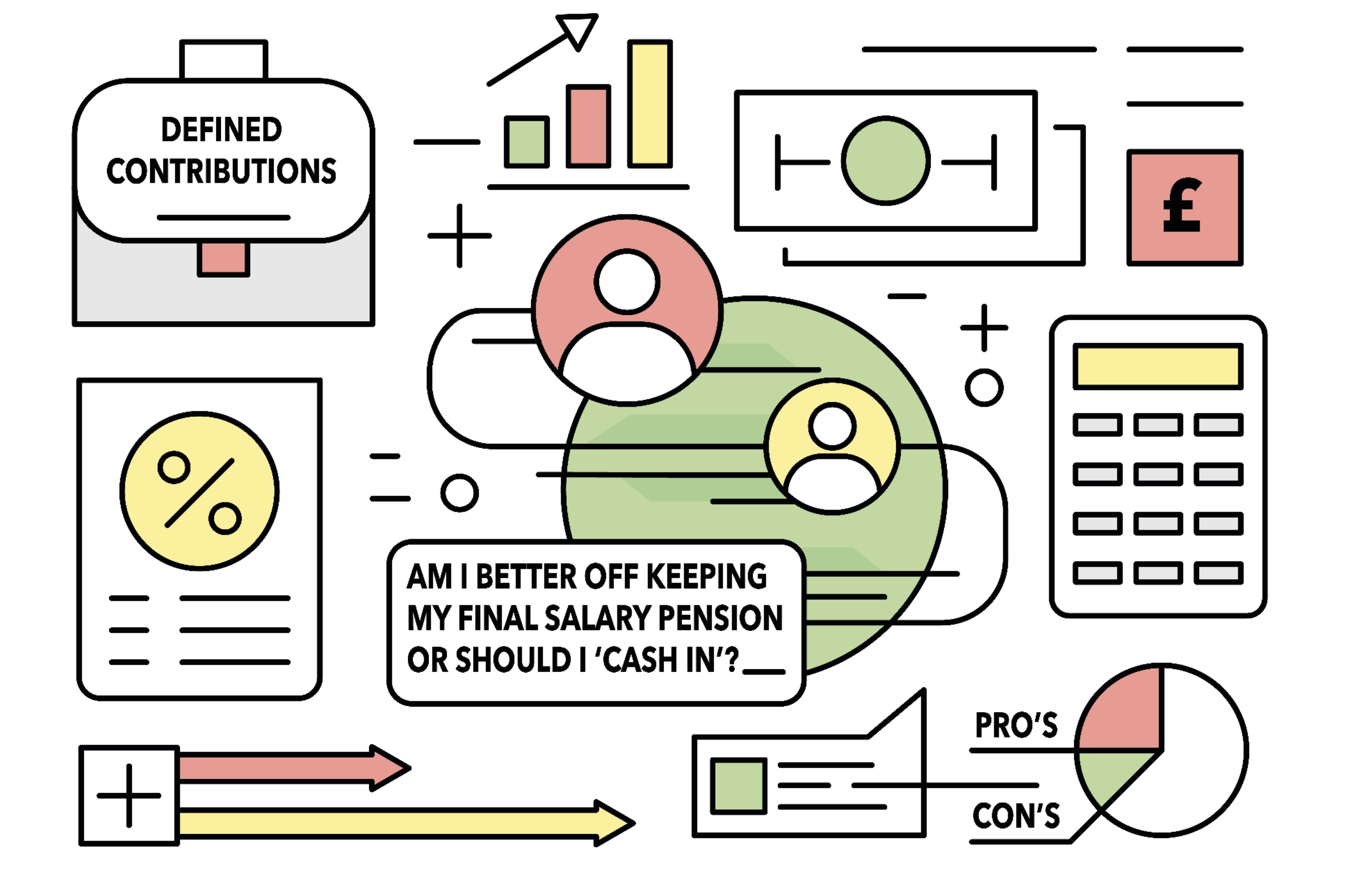 Final salary (or defined benefit) pensions were regarded as the ‘gold standard’ for savers over the last few decades. Employees lucky enough to be offered a final salary pension, the benefits ensured they received a guaranteed income for life once they reach retirement age.

But thanks to a combination of record low yields on UK government bonds and our ever-lengthening life spans, the cost to employers of providing a final salary pension for life has hit an all-time high. To help dispose of this liability they are offering their employees a lump sum, that in some cases exceed 30 times that of their final salary income, to transfer out of their final salary scheme.

The temptation to ‘cash in’ final salary pensions has arguably never been greater and more than 200,000 savers are planning to move out of their final salary pensions this year, but it is not a decision to be taken lightly, and must be weighed up carefully against the certainty of a regular income for life.

About 15m people are members of defined benefit pension schemes, run by some of the country’s biggest private sector employers as well as the public defined benefit pensions promise to pay a guaranteed income for life, based on a final, or career average, salary. They are among the most generous and sought-after schemes around, so conventional wisdom says that swapping them for riskier defined contribution pensions is generally a bad idea. Yet this year alone some 200,000 savers are planning to cash in their final salary pensions, loured by the temptation of high transfer valuations. In certain cases employee’s with final salary projections of £30,000 have been offered transfer lump sums of £1 million or more, more than 30 times their projected retirement income.

Should we be sceptical?

Subsequently labelled as the ‘pensions-misselling scandal’, the decade-long battle for compensation that ensued has not been forgotten. But the pension freedoms introduced in 2015 combined with record high transfer values has made the decision to move more enticing than ever before.

Uncertainty: your final salary pension is guaranteed to be paid for as long as you live. There is no chance of running out of money if you live longer than you expected. If you transfer your pension, it may not last as long as you do!

Risk: if you’re in a final salary pension the money you retire on is linked to your salary, not how well the stock market has done. If you transfer your pension, what you have to live on will depend on what it’s invested in.

Pension for your survivors: if you’re in a final salary scheme, it will normally pay a pension for your husband, wife or civil partner. It may pay this pension for other people – such as any children who are financially dependent on you. If you transfer your pension you’d have to buy that out of your pension pot, or make sure there was enough money ‘left over’ when you die.

Tax if you have a large pension: This is only a problem for those with a large pension pot. Under the current rules, you can build up a pension of £1 million and not have to pay tax charges on it. If you have a pension pot type of pension, then it’s based on the value of the fund being £1 million or more. But if you have a final salary pension, the sums are rather more complicated and may work in your favour. In very basic terms, the equivalent value of the fund for the lifetime allowance calculations is 20 times the annual pension entitlement they’ve built up plus any money they take as a tax-free cash lump sum.

Why swapping may be the right choice for you

Despite the clear benefits of maintaining a defined benefits pension scheme there are some compelling advantages to cashing in that will be the right way forward for some.

Since the Brexit vote in June 2016, the transfer valuations made to those who want to swap a future final salary pension for cash upfront have jumped a 10th, say advisers. With some offers improving by tens of thousands of pounds over a matter of months, those in final salary schemes approaching retirement are considering whether it makes financial sense to cash in the pension now.

With lump sum offers exceeding £1 million for final salary schemes that pay out £30,000 a year, the temptation to cash in is clear and the benefits can be huge.

Flexibility: by transferring your pension, you can take money from it whenever you want to. You don’t have to take money as a regular income (in the way that you’d be paid from your final salary pension).

More tax-free cash?: you can take up to 25% out of a money purchase pension tax-free. Some final salary pensions offer a tax free lump sum, but this is often considerably lower than the 25% tax free lump sum available of the relevant transfer value.

Inheritance: if you transfer your pension, any money that’s left in the pension pot after you die can be left to your family. In some cases there may be no tax to pay. With a final salary pension, your husband, wife or civil partner may get a ‘spouse’s pension’ but this wouldn’t necessarily be the same as the amount of pension you’d built up over the years minus what you’ve been already paid.

Health: one of the advantages of a Defined Benefits pension is that it lasts as long as you do. But what about people who think – or know – that their life expectancy is likely to be on the short side? For example, if you draw a pension at 65 and die at 71 then you will not have got much out of the pension scheme compared with someone who lives well into their nineties. DB pension schemes work by pooling risk, and in effect those who live for the longest time are subsidised by those who live for the shortest time.

Worries about your employer’s financial health: with a final salary pension, if your employer goes bust you may lose out. That’s because the pensions safety net, the Pension Protection Fund would step in. However, it won’t necessarily pay the full pension that you’re entitled to.

Is a pension transfer right for you?

Well, if your priority is a guaranteed income or you don’t have anyone to whom you’d like to leave your pension wealth, then a transfer may offer little. But if a lump sum and the freedoms this brings is likely to benefit you and your family in the longer term then ‘cashing in’ your final salary pension may be the way to go.

For those considering transferring their defined benefit pension, it may prove to be the single biggest financial decision of their life. Because of its significance the government requires those requesting to transfer a pension worth more than £30,000 to first obtain regulated advice. Savers with smaller transfer values are not subject to the advice requirement.

Speak to an expert

It makes sense to find a good adviser you feel you can work with before you apply for a transfer value and the clock starts ticking. Remember, both your existing scheme and your new pension provider will require evidence that you’ve received this advice before they’ll authorise a transfer. If you would like to speak to an expert adviser login to yodelar, or download the mobile app, and speak to a member of our team, who will do everything they can do to guide and assist.