Legal & General (L&G) are a worldwide financial brand that has been around for almost 2 centuries. They are the UK’s largest life insurer and a Global top 20 firm by assets under management.

As one of the UK’s most recognisable and trusted financial institutions, L&G appeal to many investors who find comfort in the security of a household brand. However, brand perception can often drive consumer confidence rather than the quality of the underlying product, and as identified in this review a large proportion of Legal and Generals funds have consistently underperformed.

In this report, we analysed more than 600 L&G funds for performance and sector ranking over the 1, 3 & 5 year periods up to 1st March 2018 and some 61.5% of their funds received a poor 1 or 2 Yodelar performance rating.

From the 668 funds analysed for this report, 64 were unit trust & OEIC funds. Only 4 of these 64 funds have managed to consistently maintain top quartile performance within their sectors over the recent 1, 3 & 5 year periods. One of their top performing funds was the L&G Growth Trust, which holds a relatively small £198.55 million of client money. Despite its size, this fund has managed to outperform 83% of competing same sector funds over the recent 12 months with growth of 8.78%, and over 5 years it returned growth of 75.04%, which was greater than 89% of funds in its sector.

It is worth noting that all 4 top performing L&G unit trust funds are actively managed.

L&G are the UK’s largest Life fund provider with 211 Life funds currently available to investors - yet Legal & General manage only a small proportion of these funds with the significant majority managed by external management firms. However, as these funds are branded by L&G and available to their clients they have all been included in this analysis. Our analysis of each life fund determined that only 12 of the 211 (5.7%) available rated as top performing 5 star funds.  One such fund was the L&G Artemis European Growth fund which has consistently outperformed 90% of same sector funds over the recent 1 and 5 year periods with growth of 17.1% and 76.66% respectively.

Another top performing life fund was their Growth fund, which they also manage. This fund returned growth of 52.76%over the recent 5-year period, which was greater than 84% of same sector funds.

Similar to their range of Life funds, L&G offer their investors access to pension funds that are under the management of third-party fund managers. From the 393 pension funds they have made available to their clients 49 (12.5%) have been rated as top performing 5 star funds.

One of the best performing L&G pension funds is their UK Recovery fund, which has persistently been among the best performing pension funds its sector. The L&G UK Recovery fund returned growth of 63.19% over the recent 5 year period which was better than 90% of competing same sector funds. However, the Old Mutual managed ‘L&G Old Mutual UK Mid Cap pension fund,’ which also competes within the same sector, returned significantly greater growth of 125.69% over the same period. 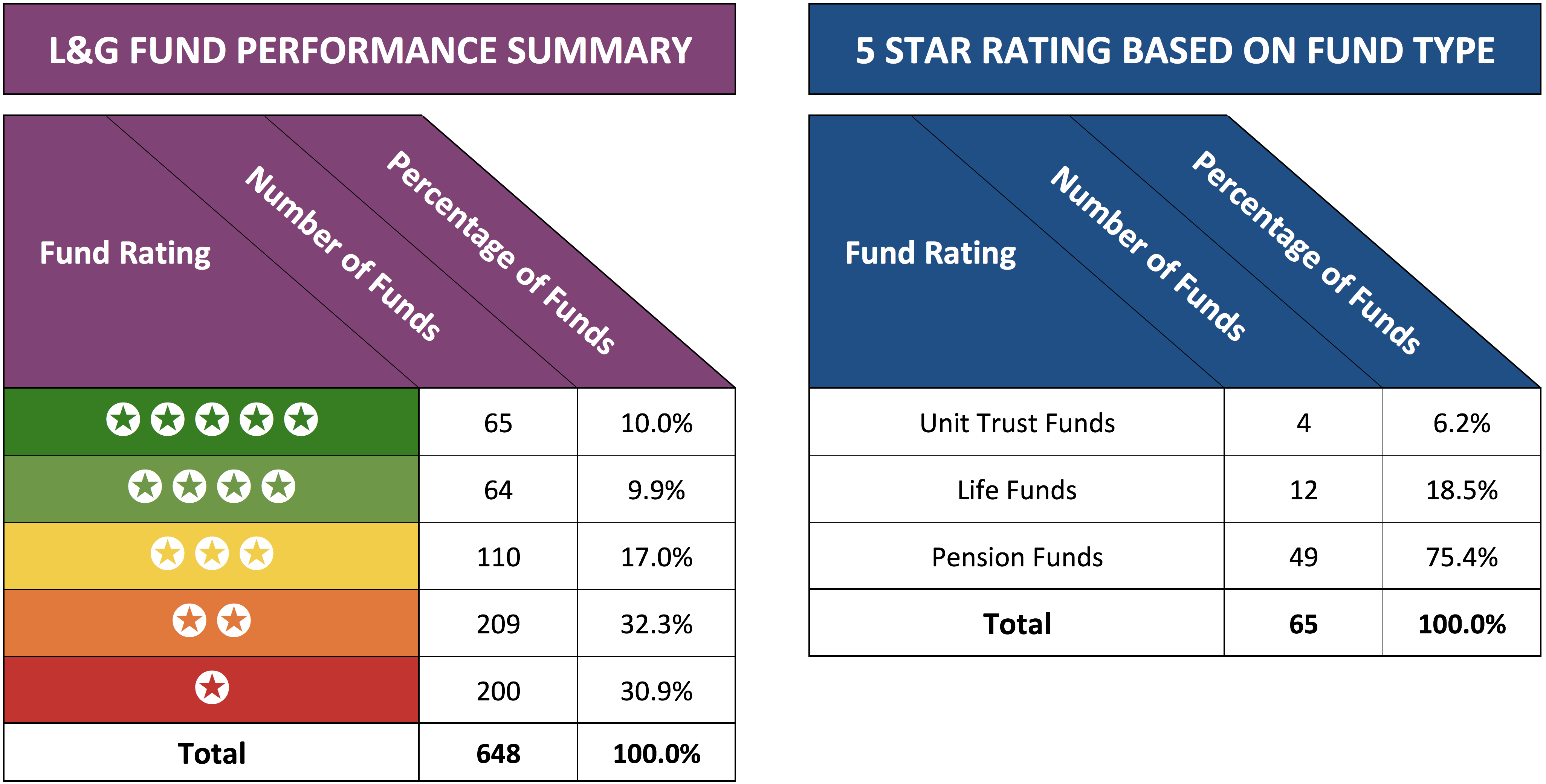 L&G Funds That Have Struggled

One of the funds under the management of L&G to disappoint was their UK Smaller companies trust, which currently holds £349 million of client funds. This fund returned 5-year growth of 73.08%, which on the surface may seem competitive but it was, in fact, one of the lowest returns in a sector which averaged growth of 105.44%.

Another fund under the management of L&G that has disappointed was their Asian Income Trust. This unit trust fund currently holds some £403 million of client funds and sits within the often volatile Asia Pacific excluding Japan sector. Over the recent 12 months, this fund this fund returned growth of 3.52%, which ranked 85th out of 91 funds in its sector and well below the sector average of 14.05%. Over 5-years it continued to disappoint returning growth of 38.75%, which again was well below the sector average (55.64%).

From the pension range of funds L&G have on offer some 57.5% received a poor 1 or 2 star performance rating. One of these funds was the L&G Newton Asian Income pension fund which is managed by Newton & BNY Mellon. Our analysis identified that this fund has consistently been among the worst performers in its sector. Over the recent 12 months it was outperformed by 99.5% of competing same sector funds and over 5 years it ranked 184th out of 189 funds with growth 25.39%.

Our analysis identified that a large proportion of L&G funds have underperformed in comparison to competing same sector funds. In fact, 61% of their unit trust, 69.2% of their life funds and 57.5% of the pension funds provided by Legal & General have received a poor 1 or 2 star performance rating.

But it’s not all negative as L&G still have a large selection of funds on offer that has consistently been top performing and remain high-quality investment opportunities.

In fact, 19.9% of the funds rated in this analysis have consistently outperformed their peers and received a ‘good’ 4 star performance rating of which more than half received an excellent 5 star rating.