Passive investing has grown 4.5 times faster than the active management industry in 2016 as investors continue to be attracted by this lower cost investment approach. But critics of passive investing say funds that simply track an index will always underperform the market when costs are taken into account. In contrast, active managers can potentially deliver market-beating returns by carefully choosing the stocks they hold.

So, which is best active funds or passive funds?

First off, what’s the difference?

The main difference between active and passive funds, unsurprisingly, is that the former is managed “actively” by a fund manager seeking to achieve outperformance. By applying human intelligence to asset selection and a whole variety of other factors, the manager will hope to deliver a return that is superior to the market as a whole or, for funds with more conservative investment strategies, to protect capital and lose less value if markets fall.

In contrast passive funds are essentially run by a computer and will simply track a market. The funds will buy all of the assets in a particular market, or the majority, to give you a return that reflects how the market is performing and because they have no management or frequent trading costs their charges are often much less in comparison.

Much of the debate between active and passive strategies boils down to this issue. Essentially, the debate centres on whether it’s worth paying the higher costs levied by active fund managers or whether you’re more likely to enjoy greater rewards in the long run by sticking to cheaper passive vehicles.

The debate over active vs passive funds

The number of passive funds available has risen, from the broad-based, tracking major indexes such as the FTSE or Dow, to the more specialised, offering access to emerging markets, specific geographies and regions, or those tracking sectors – or even

multiple sectors. But despite the increased passive options and its rising popularity among investors, who often view it as a more stable form of investing, it is argued that passive strategies can’t shield investors from periods of volatility. After all, if the market a particular fund is tracking takes a dive, so will the portfolio’s value.

But supporters of passive investing argue that many active fund managers fail to consistently beat the market over the longer term. However, our analysis of more than 3000 unit trust and OEIC funds, which included almost 100 passive funds, within the IA investment universe contradicts this belief. 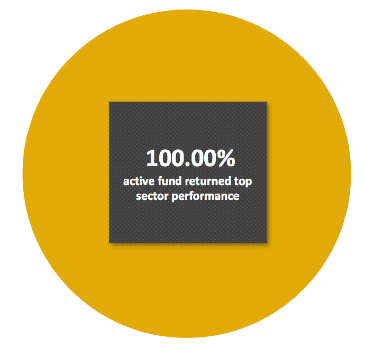 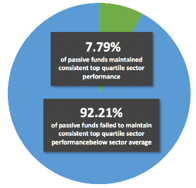 Our study found that during the recent 1, 3 & 5 years, 100% of the top performing funds in each sector within the IA universe were actively managed. While this may not be surprising, it does confirm (at least for the performance seeking investor) that actively managed funds are unrivalled.

What was particularly surprising was that only 7.79% of passive funds within achieved top quartile sector performance during the recent 12 months and over 5 years only 14% ranked within the top ¼ of their sector for growth, which further supports the potential for greater growth that active funds offer.

In many cases investors pay annual charges of around 0.75% a year for actively managed funds. In contrast, some passive funds charge less than 0.1% a year.

The difference between the figures may appear small but over time their impact on your returns can be considerable. Take the following example, bearing in mind that these figures are based on a simplified example and are for illustrative purposes only. Consistent returns over a prolonged period are very unlikely.

However, the same amount invested in a similar performing actively managed fund with a 0.75% annual charge would grow to just £18,959 over the same period once fees have been deducted. That’s a difference of almost £3,000 just as a result of the fee.

Although over time, the variation in fees between a passive and active fund can mount up to a hefty sum, the difference in growth between the 2 can be significantly greater than the variance caused by fees. For this reason, over emphasis on fees can distract attention away from much greater opportunities. This was reaffirmed in our analysis which identified that on average actively managed funds have achieved 3% greater growth than passive funds over the recent 5-year period. But when compared to the top performing actively managed funds (which can be identified in our best funds reports), the performance difference is significant. The best performing funds within the IA Universe returned growth over the recent 5-year period that was on average 162% greater than the average growth returned by passive funds.

We analysed the 1, 3 & 5-year cumulative performance of 80 passive funds that have been classified by the Investment Association along with their sector rank and the average growth for each of their sectors.

This report provides a comprehensive insight into their performance and identifies that only 1 of the 80 passive funds (Vanguard UK Government Bond Index fund) has consistently outperformed 75% of competing same sector funds over the 1, 3 & 5-year period up to October 2017, with many popular passive funds underperforming. One such fund to consistently perform below average is the popular ‘Vanguard FTSE U.K. All Share Index fund, which holds almost £7 Billion of investor money. This fund returned growth of 63.4% in the 5 years up to October 2017. However, the average growth for the same sector during this period was 76.9%.

61 of the 80 passive funds analysed have 5 years history and are classified within a sector. 45 of these 61 funds (74%) have returned 5-year growth that was below the average for their sector.

While there are both positives and negatives to passive and active investing the fact is, actively managed funds have outperformed their passive counterparts.

What is right for you?

Whether or not you feel active or passive funds are the right options for you it is important to make choices based on informed decisions. Investing by its very nature will have a varying element of risk, but like all risk based investments, knowledge can decrease that risk and enable investors to make more efficient and informed investment decisions.