Legal & General are a FTSE 100 company and one of the oldest and largest insurance companies in the world, with a heritage dating back to 1836. They are the UK’s largest fund house and just last year the groups boss Nigel Wilson proclaimed to investors that their asset management arm was “built for the future” with “the best team we’ve ever had” as their total assets under management reached almost £1 trillion.

The Financial Times recently uncovered that some of Legal & Generals employees have reported them to the FCA accusing the asset manager of compliance and risk failures that potentially cost its clients millions of pounds. They also allege there is a culture of bullying at fund manager level, with one complainant describing the company’s culture as “toxic”.

To further compound Legal & Generals woes, the performance of their funds has also been called into question as 80% of their funds sustained losses over the past 12 months.

We analysed the performance and sector ranking for 696 L&G funds over the 1, 3 & 5 year periods up to 1st February 2019. Each fund was then rated between 1 to 5 stars based on how their consistency and ability to perform in comparison to all other competing funds within the same sector.

From the 696 funds analysed for this report, 66 were unit trust & OEIC funds. From these 66 funds, only the L&G UK Property fund managed to consistently maintain top quartile sector performance over the recent 1, 3 & 5 year periods. Launched in 2006, the L&G UK Property fund generally invests in UK commercial property, and it has persistently been one of the top performers in its sector. Over the recent 1, 3 & 5-years this fund returned cumulative growth of 5.03%, 16.51%, and 45.56% respectively. In comparison, the sector average for the period was 3.39%, 11.21%, and 32.77%.

Another L&G unit trust fund to impress was the ‘L&G Multi-Asset Target Return’ fund. This fund only launched in March 2015 and therefore has less than 5-years performance history. However, over the recent 1, & 3-year periods it was one of the top performers in the IA Targeted Absolute Return sector. This fund has 1-year growth of 0.63% and strong 3-year growth of 16.67%, performing over and above the -3.27% 1-year sector average and 3.54% 3-year sector average.

From the Legal & Generals range of 214 Life funds, 11  delivered returns that were consistently higher than at least 75% of their peers. One of their most impressive Life funds was the L&G Gilt fund. This fund sits within the LF UK Gilts sector, and over the recent 3 & 5-year periods it ranked 1st in its sector for growth as it returned 19.20%, and 65.62% for the periods.

The ‘L&G Liontrust UK Growth’ Life fund was another Legal and General fund to deliver exceptional performance consistently. Despite its small size of just £2.93 million, this fund ranked 21st out of 553 funds in its sector over the past 5-years with cumulative growth of 40.07% - more than double the 19.99% sector average.

Legal & General are relatively new to the ETF market, and currently, they have just 20 ETF funds with at least 1-years performance history, and only 6 these funds have 5-years history. From their range of ETFs, the ‘L&G Gold Mining UCITS ETF USD’ had the strongest 5-year sector ranking with growth of 37.62% outperforming 85% of the 465 competing funds in its sector.

Widely recognised for their pension funds, Legal & General are among the most prolific pension providers with 390 funds on the market. 19% of their pension funds received a strong 4 or 5-star performance rating, which was notably higher than any of their other range of funds.  Among the best L&G pension funds was their ‘L&G Man GLG Continental European Growth’ pension fund. This fund has consistently been one of the best funds in its sector, and over the past 5-years, it returned cumulative growth of 92.97%, which not only eclipsed the 36.83% sector average but it has the highest growth out of all 337 funds in its sector. 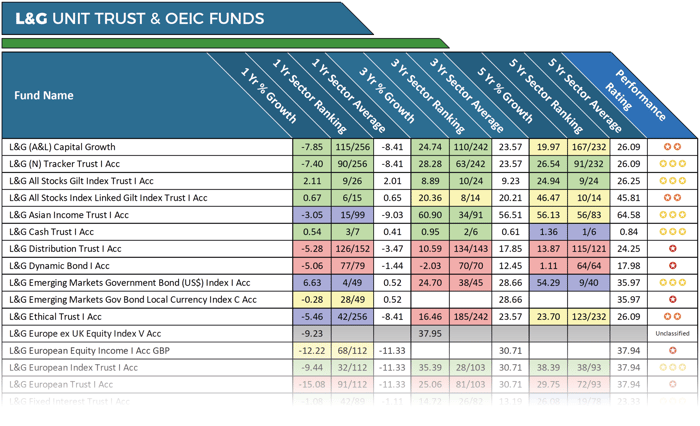 With 696 funds on the market, it is only realistic to expect some of these funds to underperform. But the level of underperformance from some L&G funds that has been particularly disappointing.

Among their funds to disappoint was their UK Alpha Trust fund. This fund manages £117.9 million of client assets and sits within the competitive IA UK All Companies sector. Over the past 5-years, this fund returned negative growth of -3.39%, which not only fell well short of the 26.09% sector average, but it was the worst performing fund in its sector ranking 232nd out of 232 funds.

Legal & Generals Fidelity American Life fund was another fund to perform comparatively poorly. Over the recent 1, 3 & 5-years this fund returned -6.39%, 28.49%, and 40.74% respectively. Some investors in this fund have told us they are happy with this performance considering that markets fell Globally this past year. But when you compare this fund alongside its competitors within the same sector (LF North American Equities) its performance looks far from competitive. The North American Equities sector has been among the strongest in recent years with the sector averaging 1, 3 & 5-year returns of 1.79%, 48.63%, and 72.86%. Over these periods the L&G Fidelity American fund was consistently outperformed by 99% of its rivals.

The L&G Legg Mason IF ClearBridge US Equity Pension fund was among their lowest ranking pension funds. This fund returned growth over the recent 3-years of 35.06%, which ranked 290th out of 292 funds, and over 5-years its growth of 52.02% was worse than 98.6% of its peers.

With 696 funds on the market Legal and General cover a vast proportion of the investment market. But as identified in our analysis the majority of their funds have and continue to underperform, with many of their competitors delivering, in some cases, significantly higher growth. Their unit trust funds and ETFs, in particular, have struggled, with similarly priced but consistently better performing options readily available to investors.

Although our analysis rated only 15.4% of L&G funds with a good 4 or excellent 5-star performance rating, with such a vast range of funds on offer this still equates to a whopping 107 funds. These top performing funds are made up predominantly of Life and Pension funds. They cover a wide range of asset classes that could reasonably be used by investors and advisers to build robust and top-quality portfolios.