Neptune are a relatively small fund management firm who were founded by Robin Geffen in Hammersmith, West London in 2002. They are an active fund manager, who strive to operate efficiently in order to keep the cost of investing in their funds as low as possible. They currently manage 20 investment funds that range from regional and global equity funds to multi-asset funds - with some of these funds rated highly by financial advisers and consumer investors.

In 2015, the departure of fund manager Patrick Close resulted in Neptune applying to close their US Mid Cap fund, which held £550,000 of client assets, just one year after its launch. At the time the company stated: 'The US Mid Cap Fund has attracted lower-than-expected investor demand and the costs associated with running the portfolio mean it is not in the interests of shareholders to continue running the strategy.'

To further compound their woes annual results for the year to 31 December 2016 saw the group report an operating loss after bonus payments of £64,000. Their assets under management during the year fell further to £3.7 billion, and as of 1st November 2018 their assets under management total £2.8 billion, which is a decrease of 125% from the £6.3 billion they managed in 2012.

Despite the challenges faced by the group they claim to have created a culture that allows them to invest with conviction and gives them the freedom to go against the grain of conventional opinion. Although they remain confident in the quality of their funds, how well have these funds performed for their investors?

In this report, we reviewed all 20 of their actively managed investments for performance and sector ranking over the recent 1, 3 & 5-year period. Our analysis identified that an impressive 25% of their funds have consistently been among the top growth funds in their sectors.

Over the recent 1, 3 & 5-year periods the impressive Neptune Global Alpha fund has been the top performing fund in the entire IA Flexible Investment sector with 1, 3 & 5-year growth of 3.67%, 36.33% and 73.46% respectively. This fund takes a high conviction approach to global investing, resulting in a focused portfolio of what Neptune state are their very best ideas. The Fund has invests in companies’ shares and bonds from across the developed and emerging markets, unconstrained by region or sector as it seeks to deliver capital growth. Currently, this funds 2 largest holdings are in Amazon Inc and Alphabet Inc.

The Neptune Balanced fund has also continually delivered strong performance. Managed by Neptune’s founder, this fund sits within the IA Mixed Investment 40-85% Shares sector and is their largest and most popular fund with some £427 million of client assets under management. With growth figures down across the board in 2018 this fund managed to return growth of 1.14% over the past 12-months, which was still the 4th highest out of 152 funds in the same sector. Over 5-years it returned growth of 39.21%, which was well above the sector average of 33.49% and higher than more than 80% of all competing funds within the same sector.

Another top performing Neptune fund was their Income fund. This fund, also managed by Robin Geffen, launched in the same year the company founded and currently manages some £199 million of client assets. In the 5-year period up to 1st November 2018 this UK Equity fund returned growth of 38.91%, which was better than 84% of competing funds. 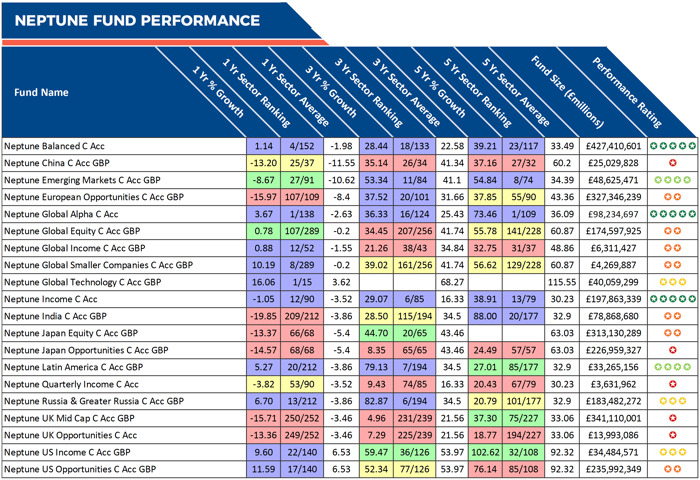 Like the significant majority of fund managers, Neptune have a proportion of investment funds that have struggled to deliver competitive returns when compared to all other funds in the same sectors - One such fund was their European Opportunities fund, which has experienced fluctuating performance over the past several years with the most recent 12 months proving to be a particularly difficult period for this fund. Since its launch in 2002 this fund has amassed some £319 million of client assets under management and it sits within the Europe Excluding UK sector alongside 108 competing funds. This sector has had a difficult year and only 7 funds have been able to return positive growth over the past 12 months. However, with negative growth of -15.97%, the Neptune European Opportunities fund has been among the very worst ranking 107th out of the 109 funds in its sector.

Another Neptune fund to struggle has been their Japan Opportunities fund. This fund currently holds £227 million of client assets and it has consistently been the worst performing fund in the entire IA Japan sector over the recent 1, 3 & 5-year periods. The popular UK Mid Cap fund has also had a terrible 12-months with its negative growth of -15.71% during this period ranking lower than 99% of all other funds in its sector. 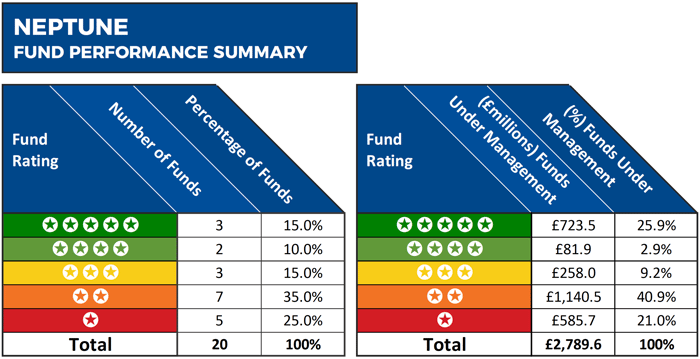 How Competitive Are Neptune

Despite their relatively small size, Neptune have a wide selection of funds on offer that cover many different asset classes. As identified in our analysis a proportion of these funds have struggled, primarily in recent times, when compared to their peers. However, their Global Alpha, Income and Balanced funds have consistently been among the very best funds in their sectors for growth with a number of other fund’s managed by Neptune proving to be very competitive and quality investment opportunities for investors.