Architas established in 2008 right at the height of the financial crisis. However, their multi-manager and multi-asset investment approach has helped them build a strong reputation, and currently, they hold more than £23 billion of client assets under their management.

In the wake of the financial crisis, Architas launched a range of Multi-Asset funds that have now become an increasingly popular choice with investors and advisers who seek the protection provided by a fund that invests across several regions instead of one single market. Architas believe their multi-manager, Multi-Asset approach to investing appeals to investors as it makes it easy to diversify their investments and provide greater resilience to market shifts and more consistent returns.

Their multi-manager, multi-asset approach to investing has earned Architas a reputation as a specialist investment manager, and as demonstrated in our analysis the significant majority of their funds have been among the best in their sector over the recent 1, 3 & 5 year periods.

From the 34 funds analysed 14 are unclassified and do not sit within any investment sectors. Therefore we were unable to provide a comparative performance analysis of these funds. However, from the 20 Architas funds that were classified 9 received an excellent 5-star performance rating.

The Architas MA Active Growth fund has continually been among the very best performing funds in the IA Flexible Investment sector over the recent 1, 3 & 5-year periods up to 1st August 2018. This fund returned cumulative growth of 8.83%, 38.09%, and 54.89% respectively, which was consistently better than over 83% of competing funds in its sector.

Another top performing Architas fund was their Multi-Asset Passive Growth fund. This fund sits within the recently formed Volatility managed sector, and over the recent 5-year period it returned growth 58.52%, which was well above the 36% sector average, and over 1-year its growth of 10.46% was the highest of any fund in its sector. 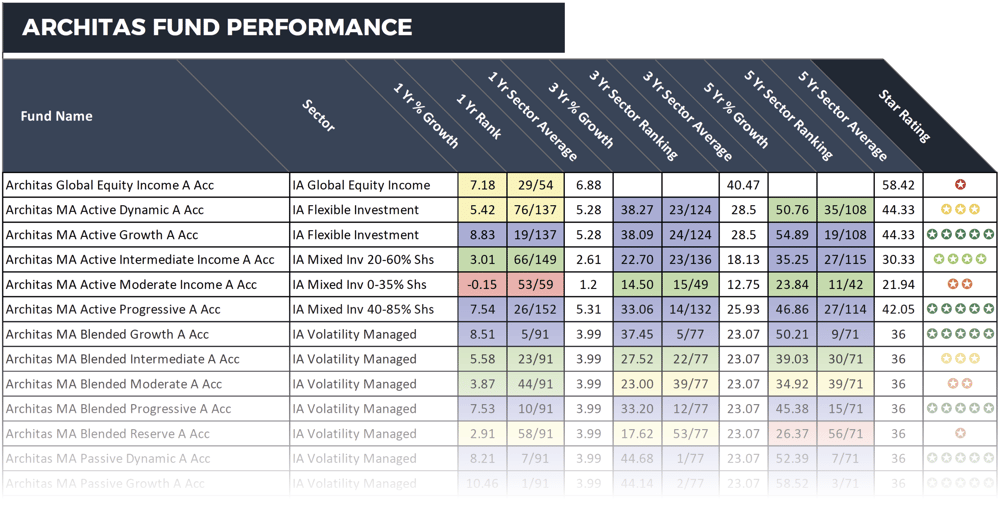 Architas Funds That Have Struggled

Like all fund managers, Architas have a proportion funds that have struggled for comparative performance, and one such fund was their Multi-Asset Blended Reserve fund. This fund currently holds £224 million of client money, and over the recent 5-year period it ranked 56th out of 71 funds in its sector with growth of 26.37%.

One other fund that has struggled to deliver consistently competitive returns was their Active Moderate Income fund. Over the recent 3 and 5-years, this fund has returned average growth in comparison to its peers. However, over the past 12-months, it returned negative growth of -0.15%, which was worse than 90% of competing funds within the same sector. 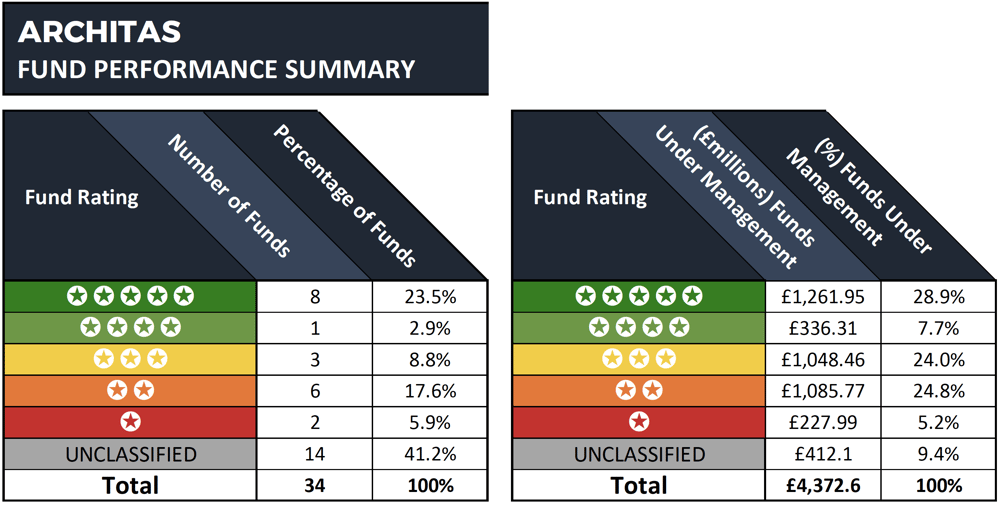 Maximise Your Portfolio Growth By Investing In Consistently Top-Performing Funds

With 9 of the funds analysed in this report receiving an excellent 5-star performance rating, it is apparent that the majority of Architas funds have excelled in comparison to the majority of their peers.

The fact is there are fund managers across the various fund management companies that perform better than the majority of funds within their relevant sectors.

As consumer investors, we have the choice to invest in poor-performing funds, due to poor advice or a lack of knowledge, or we can choose to arm ourselves with the necessary research and information and invest in funds and fund managers that consistently achieve top performance within their chosen sector.

However, from our analysis of their funds, Architas have demonstrated their ability to consistently deliver top performance from the vast majority of their funds, which supports their reputation as a specialist investment manager.