J.P Morgan Chase is one of the world’s oldest and largest financial institutions with total global assets in excess of $2.6 trillion.

As a truly global firm, their investment teams are spread across more than 15 cities around the world and are connected by investment hubs in London, New York, Tokyo and Hong Kong. Through their Global investment teams, J.P Morgan believe they have the expertise across every key investment class and every economic region to deliver and manage efficiently top quality investment funds for their clients.

For this report, we analysed the 1, 3 & 5-year performance and sector ranking for 33 J.P Morgan funds and rated each fund’s performance from 1 – 5-stars based on how they consistently performed in comparison to all other competing funds within the same sectors.

Our analysis identified that over the recent 1, 3 & 5-year period 4 JP Morgan funds received a top performing 5-star rating as each had consistently outperformed at least 75% of competing same sector funds over all periods analysed.

From their funds that received a 5-star performance rating, the largest was the JPM Japan fund. This fund is classified within the often volatile and higher risk IA Japan sector, and it invests primarily in shares of Japanese companies. Our analysis identified that over the recent 12 months the JPM Japan fund outperformed every other fund in the IA Japan sector with growth of 19.39% - In comparison, the sector average over the same period was 7.61%. Over the recent 5-year period it also excelled as it returned growth of 119.35%, which was notably higher than the 78.37% sector average for the same period. 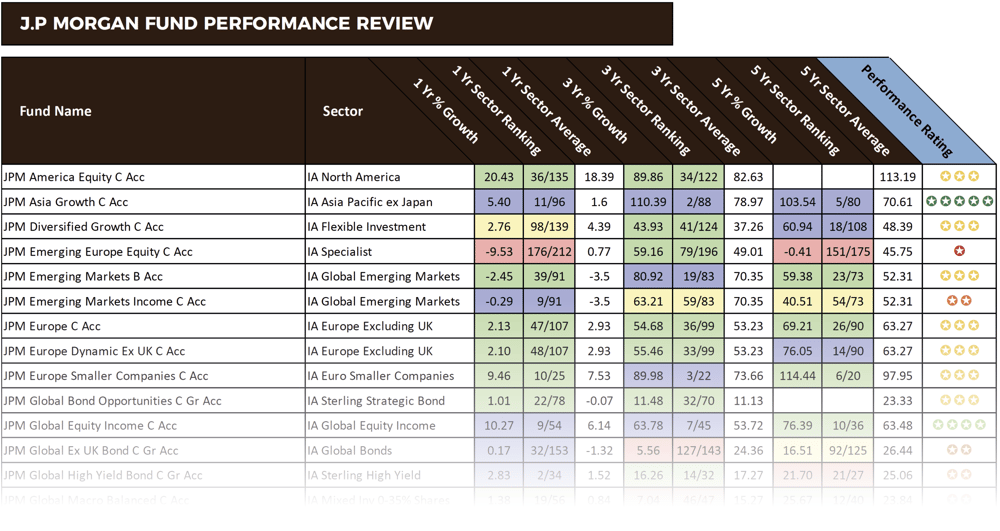 Access the full J.P Morgan fund review in the September 2018 edition of the Yodelar investor magazine >>

The 33 JPM funds featured in this report hold combined client assets under management of £14.7 billion. However, the fund with the most substantial client assets was the JPM US Select fund, with £3.6 billion. This popular fund launched in October 2000, and it has consistently delivered returns that outperformed the sector average, however, despite its consistency, when compared to competing same sector funds it was outperformed by at least 29% during the periods analysed.

To provide a performance comparison between a 3-star rated fund that has consistently maintained ‘good’ 2nd quartile performance to a 5-star fund within the same sector that has consistently maintained ‘top’ 1st quartile performance we analysed the JPM US Select fund alongside the Baillie Gifford American fund. Both of these funds share the same objectives (delivering growth by investing primarily in North American companies) However, the difference in their performance has been significant. 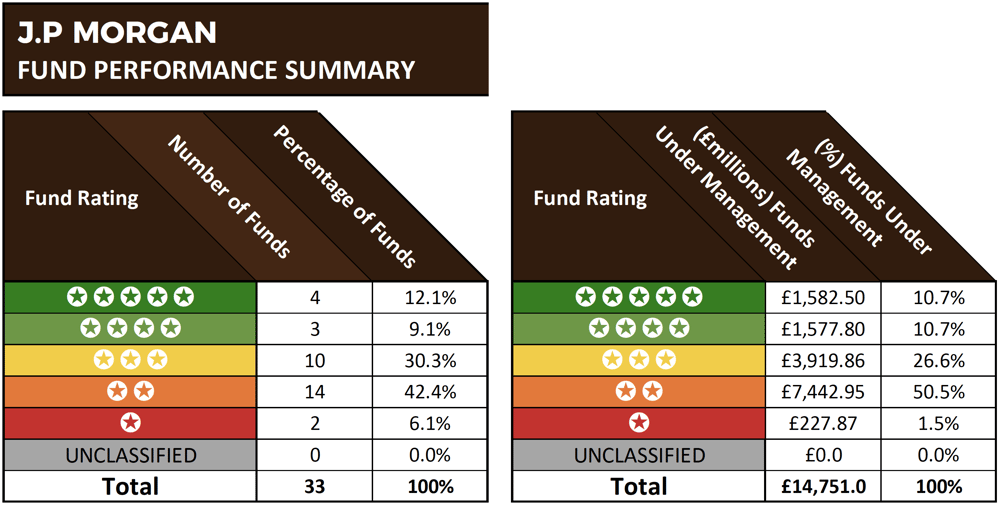 52% of Client Assets Are Held In Funds That Have Underperformed

As identified in our analysis, JP Morgan have a robust selection of quality, 4 and 5-star rated, however, 16 of their 33 funds received a poor 1 or 2-star Yodelar performance rating.

Holding some £3.6 billion of client funds, the JPM US Equity Income fund is comfortably the largest of the 33 JP Morgan funds that we analysed. However, despite proving to be a popular choice for investors it has consistently delivered returns that were below the sector average and worse than at least 50% of all other funds in the same sector.