Royal London is the largest mutual life, pensions and investment company in the UK, with funds under management of £130 billion, 8.8 million policies in force and 4,046 employees. Their Group of Companies includes Royal London Unit Trust Managers, Royal London Asset Management and RLUM from which we analysed a total of 179 of their funds comparing each funds performance alongside that of their competitors.

This analysis provides an overall performance rating between 1 and 5 stars for each of the 179 funds analysed. It features the best Royal London funds for performance and also identifies the funds under their management that have underperformed.

Our analysis of the 179 Royal London funds identified that 7 consistently outperformed at least 75% of funds in their sectors over each of the past 1, 3 & 5 years, with a total of 20 of their funds receiving a strong 4 or 5-star performance ranking. In contrast, 17 of the 179 Royal London funds analysed consistently performed worse than three-quarters of their peers during the same period with a total of 82 or 64.3% of their funds receiving a poor 1 or 2-star performance rating.

From the 179 Royal London funds analysed 11.1% received an impressive 4 or 5-star performance rating. Each of these funds has consistently been among the best in their sectors for performance. Although past performance is not an indicator of future returns, it is important information that holds fund managers accountable for their performance. For those that have maintained a high level of comparative performance, it is reasonable to assume they can continue to do so in the future.

Royal London manages over £6 billion of assets in their selection of sustainable funds that are available in a range of options to suit a number of different risk profiles, with their mid-risk (5 out of 10) Royal London Sustainable Diversified Trust among their best performers.

The investment objective of the Royal London Sustainable Diversified Trust is to achieve capital growth over the medium term (3-5 years) by investing in a diverse range of asset classes, primarily in the UK that are deemed to make a positive contribution to society. The fund is classified within the IA Mixed Investment 20-60% Shares sector where it returned the highest growth of all 140 plus funds over the past 3 & 5 years.

Remaining with Royal London’s Sustainable fund range their Sustainable Diversified Trust fund has also enjoyed very competitive performance over the past several years. The fund itself aims to provide an attractive combination of accumulated income and capital growth, by investing mostly in fixed income securities with some equities, mainly based in the UK. It has a low-risk approach (4 out of 10) and is classified within the IA Mixed Investment 0-35% Shares sector. where over the past 3 and 5 years it has ranked 1st out of over 59 funds for performance.

The Royal London Sustainable World Trust is yet another fund from Royal Londons sustainable fund range that has a history of very good performance. The fund has a higher risk approach (7 out of 10) and is classified within the IA Mixed Investment 40-85% Shares sector. The fund has a Global mandate but it invests primarily in technology and Healthcare stocks in the US and UK. Although the past few months have been difficult for the fund with the recent technology sell-off, however, in the long term this approach has served the fund well as over the past 3 and 5 years the fund has ranked in the top 2% of its sector for performance.

The Royal London Corporate Bond fund is a lower risk fund with a risk rating of 4 out of 10 with 81% of the funds’ holdings in Sterling Corporate bonds and 19% in Global Investment Grade bonds. The fund itself is well diversified and typically has over 200 holdings. This popular fund holds assets of over £1.3 billion and it has consistently delivered above-average returns in the IA Sterling Corporate Bond sector.

Since its launch on 1st March 1999, the Royal London Corporate Bond has returned growth of 196.32%, which is significantly more than the 152.33% averaged by the sector over the same period.

Royal London’s Governed portfolio range provides investors with access to risk-rated readymade portfolios that have proven a popular choice for pension investments. The fund invests in UK, Global and Emerging Market equities. The current benchmark split is 35% UK Equities, 55% Global Equities and 10% Emerging Markets Equities. It is designed for someone who is taking income from their pension and can accept a level of uncertainty in their future income consistent with a risk rating of 5 out of 10. Since its launch in August 2012, the fund has returned cumulative growth of 85.73%, in comparison the PN Mixed Investment 0-35% Shares sector averaged 43.24% for the same period.

64.3% of the 179 Royal London funds analysed have regularly ranked among the worst performers in their sectors with consistently better-performing alternatives available to investors. 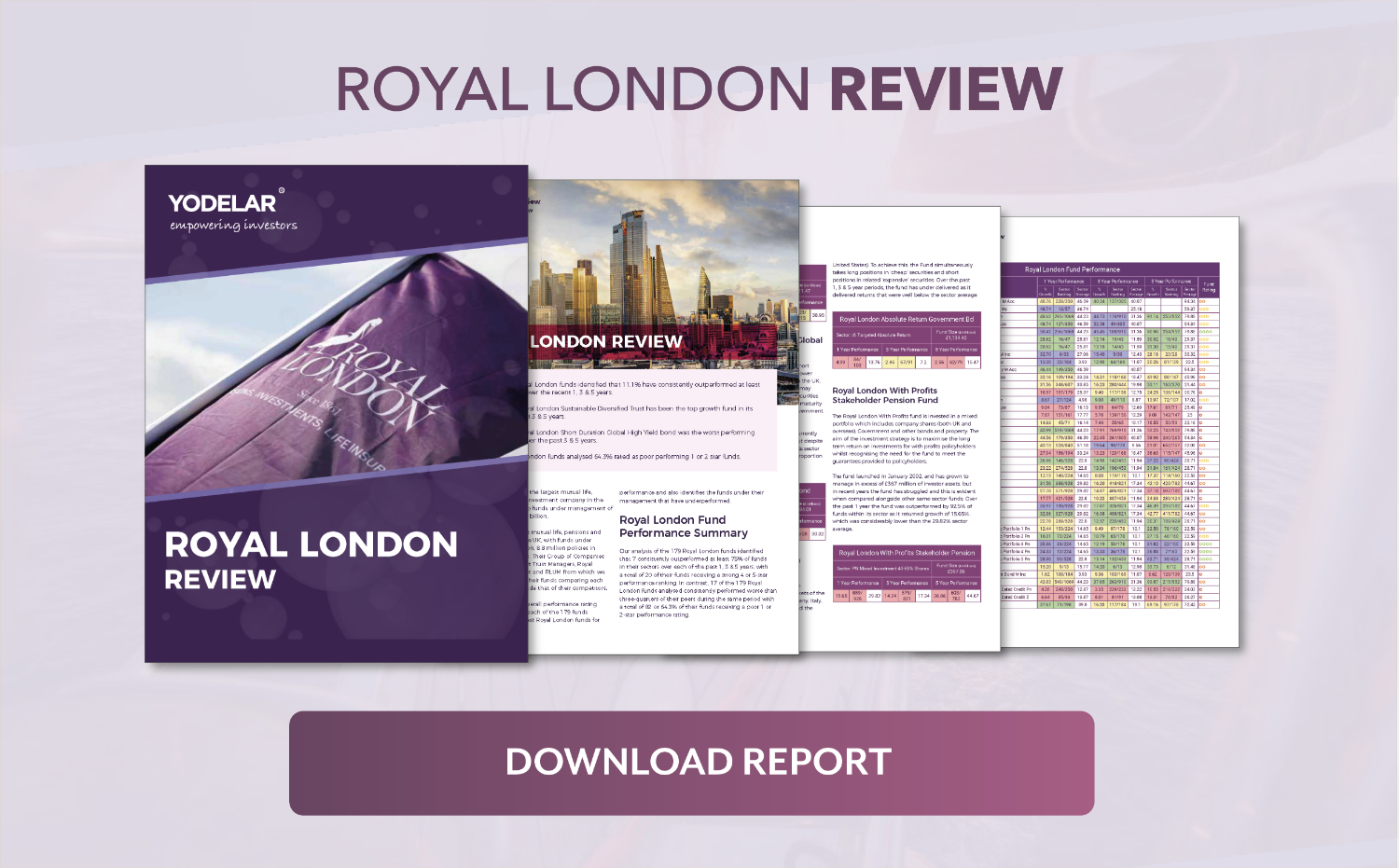 The investment objective of the Royal London UK Equity fund is to achieve capital growth over the medium term (3-5 years) by investing at least 80% in the shares of UK companies included in the FTSE All-Share Index. The Fund’s performance target is to outperform, after the deduction of charges, the FTSE All-Share Total Return GBP Index over rolling 5-year periods. However, over the past 5 years, this index has grown by 39.62% whereas the Royal London UK Equity fund has managed just 32.87%, which ranked 123rd out of 215 funds in its sector. Over the past year, the fund returned growth of 39.14%, which fell well short of the 56.52% sector average and was worse than 86% of same sector funds.

The fund has been a popular investment with currently £1.18 billion of assets under its management. But despite its size, it has consistently ranked poorly within its sector where it has been outperformed by a sizeable proportion of its competitors.

The investment strategy aims to exploit valuation differences amongst the government bond markets of the G10 economies (Belgium, Canada, France, Germany, Italy, Japan, Netherlands, Sweden, Switzerland, UK and the United States). To achieve this, the Fund simultaneously takes long positions in ‘cheap’ securities and short positions in related ‘expensive’ securities. Over the past 1, 3 & 5 year periods, the fund has underdelivered as it delivered returns that were well below the sector average.

The Royal London With-Profits fund is invested in a mixed portfolio which includes company shares (both UK and overseas), Government and other bonds and property. The aim of the investment strategy is to maximise the long term return on investments for with-profits policyholders whilst recognising the need for the fund to meet the guarantees provided to policyholders.

The fund launched in January 2002 and has grown to manage in excess of £367 million of investor assets, but in recent years the fund has struggled and this is evident when compared alongside other same sector funds. Over the past 1 year, the fund was outperformed by 92.5% of funds within its sector as it returned growth of 15.65%, which was considerably lower than the 29.82% sector average.

This portfolio aims to deliver above-inflation growth in the value of the fund at retirement, whilst taking a level of risk consistent with a balanced or moderately adventurous risk attitude over a short time period. Royal London’s Governed portfolio range has been developed as a convenient one-stop pension portfolio. The portfolio’s weighting is made up entirely of Royal London pension funds with the RLP pension funds, and as identified in this report, many of these funds have consistently underperformed.

As one of the biggest fund management brands in the UK, Royal London and its group of companies provide investors with access to a large selection of funds, some of which have consistently delivered exceptional returns, whereas others rank among the worst performers in their sectors.

20 of the 179 funds reviewed in this report have outperformed the majority of their peers over the periods analysed which equates to only 11.1% of the total funds analysed. In contrast, 115 Royal London funds ranked within the bottom half of their sectors for performance, which is disappointing for Royal London investors as there have been consistently better-performing alternatives readily available through competing providers. 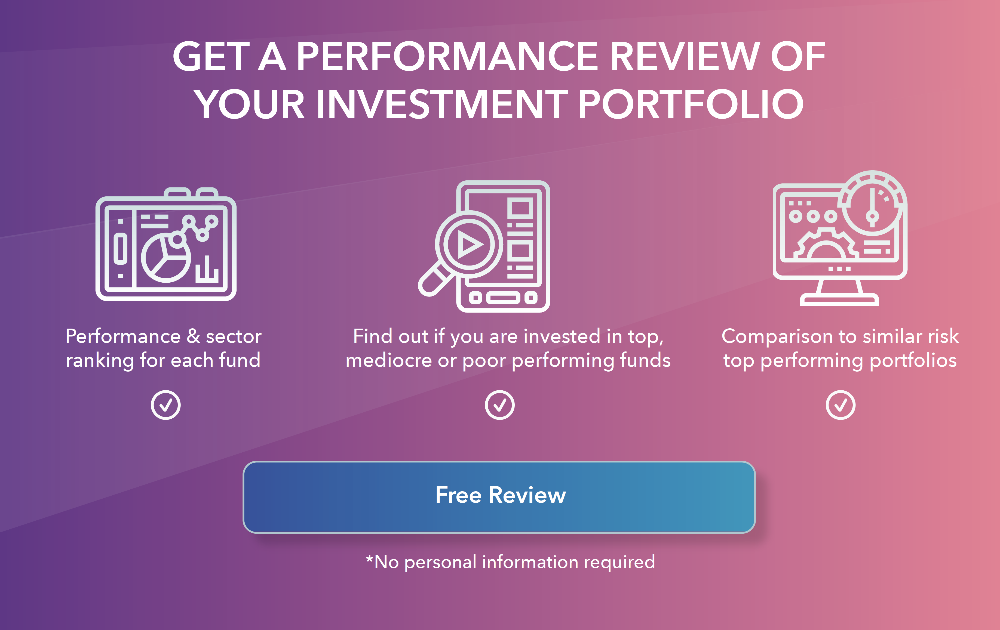