Although SJP holds a large proportion of the investment market they have come under heavy fire amidst accusations of a lack of transparency over their hefty charges and the poor performance of their funds.

As a ‘restricted’ wealth management firm St James Place and their 'partner advisers' are only permitted to provide investors with access to their own branded funds, and unlike independent advisers, they cannot recommend any other fund on the market, even if those funds are better suited to that investor.

Despite their restricted approach to wealth management they have stated “St. James's Place Wealth Management recognises that no single investment house has a monopoly on investment expertise” and as detailed in this report, the significant proportion of the funds they limit their investors to access, have underperformed.

To identify how well their own branded funds have been performing we analysed each St James’s Place pension fund, their unit trust funds and their life funds for performance and ranking over the 1, 3 and 5 year periods up to January 2017, comparing each funds performance to every other competing fund within the relevant sectors.

In total, we analysed 110 St James’s Place funds. Made up of 35 unit trust funds, 38 Life funds and 37 pension funds. Each fund was given a consistent 5 year performance rating that reflects how they ranked in comparison with other funds operating in the same investment sectors.

Top – A fund that consistently ranks within the top 25% of performers in it’s respective sector over the recent 1, 3 & 5 year period is rated as consistently top performing.

No 5 Year History – A consistent performance rating is only applied to funds that have at least 5 years history. 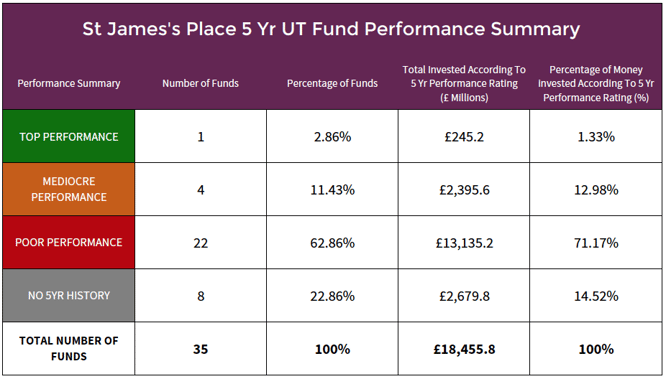 As highlighted in the above summary tables 76% of St James’s Place funds with at least 5 years performance history have ranked within the lowest 50% of performers in their sectors during the recent 5 year period.

Less Than 4% of SJP Funds Are Consistently Top Performing

From the 110 St James’s Place funds analysed for performance during the 1, 3 & 5 year period up to January 2017, less than 4% have managed to consistently rank in the top quartile for performance within their sectors.

The ‘SJP North American’ fund was the only unit trust fund that maintained consistent ‘top’ performance. This fund has outperformed 85% of competing funds within the North America sector during the recent 1, 3 & 5 year period, delivering impressive 5 year growth of 157.65%.

From the SJP pension fund range 3 funds maintained consistent top performance, one of which was the pension version of the ‘SJP North American’ fund. The ‘SJP International Equity’ pension fund also delivered impressive growth and consistently outperformed 83% of same sector funds during the periods analysed.

Our comprehensive performance analysis of St James’s Place funds identified that 76% had ranked in the bottom 50% of performers within their sectors during the recent 5 year period, with 56% performing worse than at least three quarters of competing same sector funds.

Among the worst performing St James’s Place funds were the ‘SJP Asia Pacific’ and the ‘SJP Gilts’ unit trust funds. Both of these funds have consistently underperformed and over the recent 5 year period they both performed worse than every other fund in their sector.

As such a large proportion of their funds have underperformed we are unable to detail all of them in this article – (Access our full St James’s Place fund performance review).

St James’s Place has a unique charging model. It works with about 3,000 advisers, who they call “partners”, and with what they describe as “best-in-breed” fund managers to create bespoke products for their clients.

Their ‘partner’ advisers only disclose SJP’s charges at face-to-face meetings, which for client’s, who invest in non-pension funds, is an upfront charge of 5% of what they are investing. Every time an investor contributes more money, SJP pays the adviser another 5% - although this fee can be negotiated.

For customers who invest in SJP pension funds there is no upfront charge, however SJP levy an exit charge of 6% on such clients. However, the FCA published a final ruling in November 2016 that puts an exit fee cap of 1% on pensions, but SJP had stated previously that they do not intend to alter their exit charge structure.

They have argued that the FCA cap on exit fees is age based and as their exit fees are structured to reduce by 1% each year from an initial 6%, that their charges are time based and therefore will not be affected by the recent FCA imposed cap.

As detailed in our SJP fund review, we identified a large proportion of their funds to have underperformed in comparison to other competing same sector funds, with other funds managed by other fund managers delivering consistently better returns for investors.

Their charging structure has also put St James’s Place under heavy fire. Its initial charges of 5% are among the most expensive in the industry, combined with ongoing management charges that can exceed 2%, exit penalties on their pension funds of up to 6% and combined with the lack of competitiveness from a large proportion of their funds, investors who seek value and performance from their investments may be better served investing elsewhere.