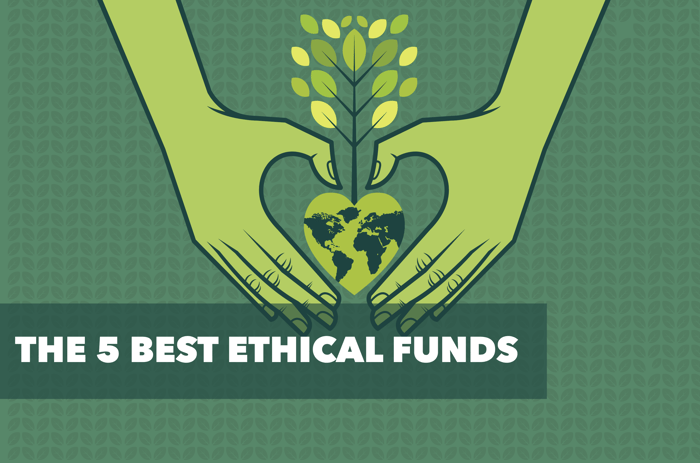 Once considered a niche area of investment practice, ethical investing has now become an important consideration for a growing number of UK investors.

In a survey carried out by Morgan Stanley, 70% of investors have said they are interested in sustainable investing.

Although the desire to invest in ethical or socially responsible investments (SRI) is on the rise, in the past the number of Ethical investments available were limited, and they often lacked appeal as they were considered to be higher risk and less competitive.

However, with greater emphasis placed on ethical investing there has been a sharp rise in the number and quality of Ethical funds available. Indeed, many of the Ethical funds now on the market have consistently outperformed their more conventional peers.

Below we review a selection of funds managed with ethical or socially responsible criteria in mind.

The 5 best Ethical funds detailed below are managed with ethical or socially responsible criteria in mind.

The 5 Best Ethical Funds detailed in this report have consistently been among the best performing funds in their sectors. However, their inclusion should not be viewed as a recommendation to invest.

Launched in 1999 the Liontrust UK Ethical fund has consistently been among the best performing funds in the competitive UK All Companies sector. This fund currently holds some £371 million of funds under management and invests primarily in Financial and Information Technology companies that meet their ethical requirements for environmental and social responsibility. In the 1 year period up to 1st March 2018, it returned growth of 13.06% was higher than 90% of competing same sector funds and significantly more than the sector average of 5.83%. Over a more extended period, this fund has also proven to be a top performer. In the recent 5-year period it returned growth of 68.18, which ranked 38th out of 223 funds while maintaining a moderate level of volatility.

Similar to the Liontrust UK Ethical fund, the Premier Ethical Fund also sits within the UK All Companies sector. This Fund has a specific investment philosophy to invest in companies (principally UK companies) whose business is based on ethical principles, with an emphasis on companies whose products or services are of widespread benefit to the community.

Over the course of the recent 5 year period this actively managed fund has consistently maintained a level of performance that was greater than at least 75% of same sector funds - in fact, its 5-year growth of 78.04% was greater than 93% of funds in its sector.

Since its launch in 2002, the Rathbone Ethical Bond has been one of the most popular funds in the IA Sterling Corporate bond sector and currently holds over £1.1 billion of funds under management.

Despite assuming a defensive approach, the Rathbone Ethical Bond returned growth of 6.2% over the recent 1-year period, which was the highest of all 88 main unit funds in its sector. Over a 5 year period, its performance has also been impressive as it returned cumulative growth of 36.33% which was notably higher than the sector average of 26.08%.

This fund is a traditional socially responsible investment (SRI) fund, however, Standard Life state “While we recognise the personal nature of everyone’s ethics, we aim to ensure that the funds are reflective of the wider views of those who invest in them. We regularly review the criteria, both positive and negative, through customer surveys and consultations to ensure they remain relevant and industry leading”.

The Standard Life Investments UK Ethical Retail Fund competes alongside the Liontrust UK Ethical fund and the Premier Ethical fund in the UK All Companies sector where it has enjoyed a consistently strong performance.

With funds under management approaching £300 million, this fund primarily invests in Healthcare, financials, technology, and telecoms. Over the recent 1 year period, this fund achieved growth of 15.26% which was more than 92% of same sector funds and over 5-years it returned strong cumulative growth of 67.14%. 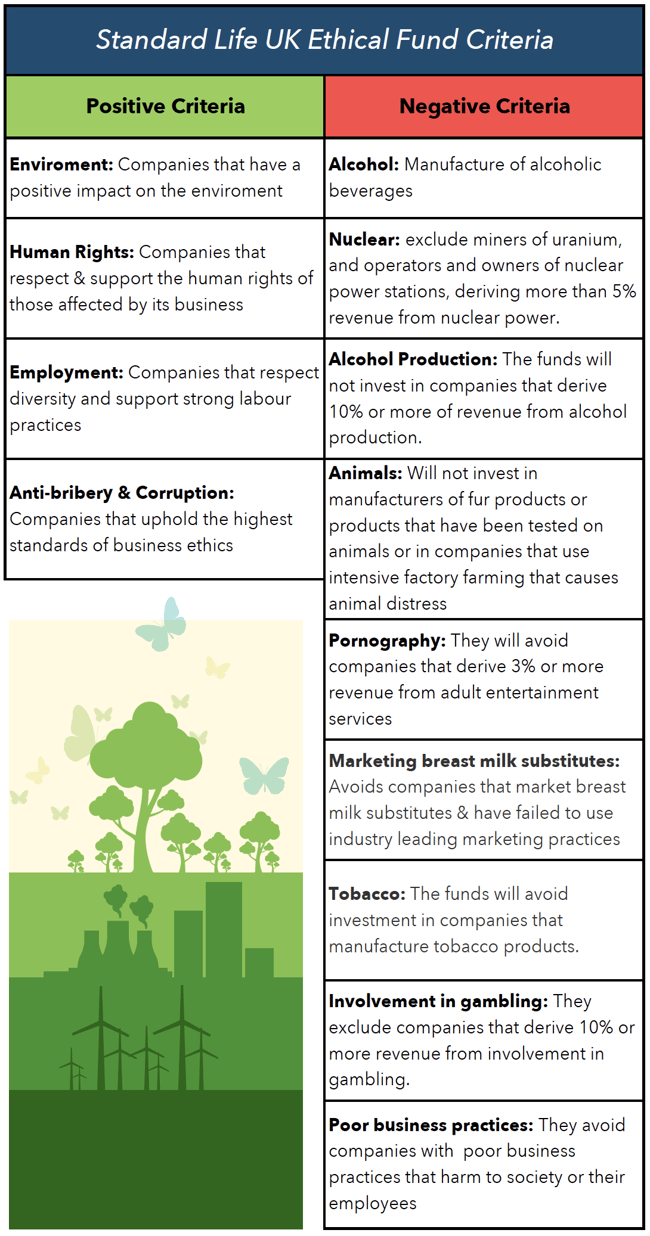 Since its launch in January 2007, the popular Royal London Ethical Bond has amassed more than £535 million of funds under management. Despite being a relatively defensive fund, it has managed to return very competitive growth of 84.92% over the recent 10 year period and growth of 31.19% over the past 5 year period.

This fund aims to achieve a combination of income and capital growth over the medium (5 years) to long (7 years) term and invests predominantly in investment grade UK corporate bonds which meet predefined ethical criteria such as banks and financial services, insurance, real estate and social housing. The policy of the fund considers all of the following ethical issues: alcohol, armaments, gambling, pornography, tobacco, human rights, animal testing and the environment.

With a growing demand for ethical investing, the number and quality of suitable funds available have grown, and as demonstrated in this report investors in socially responsible and ethical funds can also benefit from highly competitive investment returns.

Ethical Funds - How Ethical Are They And How Do They Perform?