Since Neil Woodford stopped customers withdrawing money from his flagship fund at the start of June 2019, investors have shunned anything associated with the UK’s highest-profile fund manager. But few have been hit harder than Hargreaves Lansdown, the country’s largest investment fund supermarket.

The company has been one of Woodford’s biggest supporters regularly recommending his funds to their 1.2 million clients, and even holding sizeable shares in them through their popular range of Multi-Manager funds.

The fallout has led to MPs demanding Hargreaves Lansdown detail the financial extent of their relationship with Woodford, asking questions as to why they continued to promote Woodford’s funds even though they have consistently been the worst performers in their sector.

In this report, we look into the fees both Hargreaves Lansdown and Neil Woodford generated through their relationship and how much investing in Woodford’s funds has cost investors.

The Importance of Hargreaves Lansdown For Neil Woodford

In 2015, the first full calendar year for Woodford Equity Income, Hargreaves Lansdown clients owned 38%, or £3.1 billion, of the fund. By 2016, that had risen to £3.4 billion, even though their relative stake in the fund had dipped to 36% after the fund had a strong early run of performance.

In 2017, Woodford endured a torrid year, falling to the bottom of the Investment Association’s UK Equity Income sector which prompted the first wave of withdrawals from his flagship fund.

Hargreaves Lansdown clients pulled £1 billion from the fund, at a faster rate than Woodford’s other investors. But such is the broker’s scale, and the inflows it had already driven, that at £2.2 billion their clients’ stakes still represented 28% of the fund’s assets.

During the initial 3 years, Woodford would have generated roughly £50 million in fee revenue from Hargreaves Lansdown clients alone.

For Woodford’s Income Focus fund, Hargreaves Lansdown’s influence is more alarming. Their clients owned roughly 75% of the then £703 million valued fund as of January past.

Hargreaves Lansdown’s backing of Woodford funds is so significant that, unlike any other broker, they are deemed a ‘related party’ in that it controls more than 20% of the shares, and must disclose holdings in its annual reports.

Despite the fund's decline, fee income was still significant, especially when taking into account the fund itself had consistently been one of the worst performing funds in its sector and returned losses since its inception. 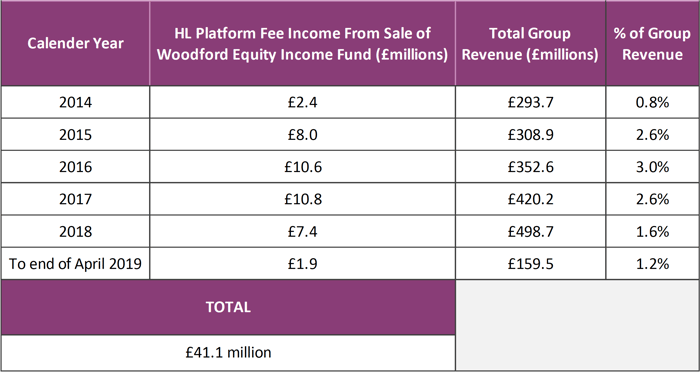 The polarising Wealth 50 promoted funds list is a highly influential list of Hargreaves Lansdown’s favourite funds which they recommend to their base of 1,136,000 clients. Originally called the Wealth 150 it was replaced at the start of 2019 with the more condensed Wealth 50 list.

Explaining this more condensed list Hargreaves Lansdown’s research director Mark Dampier said that 90% of the more than 2500 unit trusts and other investment funds available to the public were “rubbish” with Hargreaves Lansdown believing very few funds are worth recommending.

However, after the Woodford Equity Income fund suspension, greater emphasis was placed on Hargreaves Lansdown’s Wealth 50 with MP Nicky Morgan asking them to explain their selection process. In response, Hargreaves Lansdown said the selection process for their Wealth 50 list includes, a qualitative analysis of the manager’s process, philosophy, team support, incentivisation and portfolio construction. As well as, conducting more than 175 fund manager meetings a year.

Despite their selection process Hargreaves Lansdown have included both the Woodford Equity Income and Woodford Income Focus funds since their inception. These funds remained in the Wealth 50 list until 4th June 2019, when they were both removed after Woodford’s Equity Income fund was suspended.

Both of these funds have consistently performed at the bottom of their sectors and had demonstrated little prospect of recovery in the foreseeable future Neil Woodford himself warned in February 2018 to expect continued underperformance from his funds when he said, "We should all expect the environment to remain as challenging for the Woodford funds, as it has been since early summer last year.”

It is not just the regulator that has been critical of how these funds are selected. Terry Smith, a respected fund manager and founder of investment firm Fundsmith, recently voiced concerns over how Hargreaves Lansdown selects its recommended funds.

Smith was quoted in the Times as saying, “recommended funds continue to be chosen mainly for fund managers’ willingness to comply with a charging structure which enables Hargreaves Lansdown to maximise its own profitability, and not because they perform well for investors”.

Anyone who invested £10,000 into Woodford Equity Income after it was controversially included in a Hargreaves Wealth 50 recommended funds list in January 2019 would have suffered losses of £1,214 after just 150 days. In contrast, Hargreaves Lansdown is estimated to have raked in an estimated £2.5m of fees on its clients’ investment in Woodford Equity Income since its Wealth 50 list was published on 9th January.

Although the Woodford Equity Income fund’s future is in jeopardy with the fund suspended upon sustained outflows from investors, it has earned both Woodford Investment Management and Hargreaves Lansdown significant fee revenue, particularly in the first years of the funds as unparalleled interest saw it amass funds under management of more than £10 billion in its first year.

Ultimately, the relationship between Woodford and Hargreaves has earned both sizeable fee income, but for investors, many of whom have stuck by Woodford on the recommendation of the Wealth 50, it has been the opposite. Over the recent 2 years, the Woodford Equity Income fund has returned huge losses of -31.35%. The LF Woodford Income Focus fund hasn’t fared much better, since its launch on 12th April 2017, it has returned losses of -22.42%.