Invesco has grown to become one of the largest and highly regarded investment managers in the UK, with many investors holding at least one Invesco fund in their pension or ISA portfolio.

As a fund manager, they provide investors with access to 49 unit trust and OEIC funds that incorporate an ever-widening range of investment styles, asset classes and geographies. Combined, these 49 funds hold £48.3 billion of client money.

In this report, we analyse the performance and sector ranking for all 49 funds comparing each to competing same sector funds over the recent 1, 3 & 5 year period up to 1st May 2019.

Our analysis identified significant underperformance from a large proportion of Invesco funds. 81.6% of their unit trust funds performed worse than 50% or more of competing funds over the last 12 months.

Our analysis identified widespread underperformance from the majority of their funds with their UK equity and European Equity funds faring particularly bad.

Invesco currently manages 6 European focused funds and over the past 12 months, these 6 funds averaged losses of -4.44%, 5 of which ranked within the bottom quartile of their sector.

Invesco’s 9 UK focused funds have also disappointed. 6 of these 9 funds returned losses in the last 12 months, and over the last 5 years, 7 ranked among the worst 50% in their sector. The only exception to the poor performance of UK funds was from the Invesco UK Smaller Companies Equity fund, which has consistently been one of the top performers in its sector.

Only one Invesco fund has maintained a top quartile sector ranking consistently over the 1, 3 & 5 year periods analysed, with the vast majority (87.7%) consistently underperforming.

The Invesco UK Smaller Companies Equity fund was the only one of their 49 funds that managed to maintain top quartile sector ranking over the periods analysed. As its name suggests this fund sits within the competitive UK Smaller Companies sector with 49 competing funds. Over the recent 1, 3 & 5-years this fund returned growth of 5.32%, 52.73%, and 82.93%, which were comfortably higher than the sector average and better than at least three-quarters of its peers. This fund has adopted a degree of caution in recent months due to the UK’s continued political and economic uncertainty, but the fund holdings have remained resilient, and the fund’s manager is confident they can continue to generate profitable growth in excess of the wider economy.

The Invesco Asian fund has endured a difficult 12 months as it failed to return growth and ranked among the worst 25% of funds in its sector for performance. However, over the recent 3 and 5 years, it has been one of the top performers in the IA Asia Pacific Excluding Japan sector with growth returns of 73.89% and 96.78%, which ranked better than 88% of its competitors.

Despite losses of -0.08% this past year the Invesco European High Income fund has been one of the best performing funds in the IA Europe Excluding UK sector over the recent 3 & 5 years with returns of 26.25% and 33%, which were both higher than the sector average and better than at least 75% of competitors.

The low risk, low growth Invesco Money fund was the only other Invesco fund to return growth over the past 5 years that was better than at least three-quarters of competing funds. This Money Market fund returned growth of 1.30% and 2.10% over the past 3 and 5 years, which were the highest in this low-risk sector.

With £11.7 billion of client funds under management, the Invesco Global Targeted Returns fund is their largest fund. This fund is classified within the IA Targeted Absolute Return sector where, despite its popularity, it has struggled to deliver competitive returns. Over the past 12 months, this fund ranked 66th out of 100 funds in its sector as it returned losses of -2.15%. Over 3 years it only managed to return growth of 0.66%, which was well below the 5.69% sector average, and over 5 years it returned 9.81%, which was also below the sector average.

The Invesco High-Income fund is famous for being one of the funds that helped Neil Woodford build a reputation as a star fund manager. Woodford managed this fund between February 1988 and March 2014 and despite periods of strong performance when he handed over the management of this fund to Mark Barnett it was among the worst performers in its sector.

Upon Woodford’s departure, the Invesco High-Income fund experienced large outflows as many investors followed Woodford and moved their money into his Equity Income fund (a serial underperformer in its sector). More recently, the Invesco High-Income fund, under the management of Mark Barnett, has struggled. Over the past 1, 3 & 5 years this fund returned -2.69%, 7.72%, and 21.96%, each of which ranked among the worst in the IA UK All Companies sector performing well below the sector average of 1.17%, 29.76%, and 36.41%.

The £3.2 billion Invesco Income fund was another fund previously managed by Neil Woodford that Mark Barnett now controls. This fund has performed similarly to the High-Income fund and has struggled to deliver competitive returns.

The Invesco Monthly Income Plus fund is one of the most popular Invesco funds with UK investors. This fund manages £2.7 billion of client assets and it invests primarily in corporate and government fixed interest securities globally.

With £4.1 billion of client assets under management, the Invesco Corporate Bond fund is Invesco’s 3rd largest fund. This corporate bond fund is actively managed and sits within the IA Sterling Corporate Bond sector alongside
87 competing funds. Over the past 12 months, this fund ranked 61st in its sector with returns of 2.63% and over the of 18.66% were well below the 25.11% sector average and worse than 87% of its peers.

Out of the 49 Invesco perpetual funds analysed 25 (51%) received a 1-star performance rating as each was ranked within the worst 25% of funds in their respective sector.

18 Invesco funds were rated as 2-star funds. Each of these funds performed worse than at least half of their competitors over at least 2 of the 3 periods analysed.

There were 4 Invesco Perpetual funds with a modest 3-star performance rating. These 4 funds at times ranked highly within their sector but were unable to maintain a high classification and suffered from periods of
underperformance providing returns below half of their same sector competing funds.

2 (4.1%) of the 49 funds analysed received a positive 4-star performance rating. These 2 funds have consistently been among the top performers in their sectors with returns comfortably above their sector average. Over the past 12 months this fund ranked 61st in its sector with returns of 2.63% and over the past 5 years, its returns of 18.66% were well below the 25.11% sector average and worse than 87% of its peers.

Invesco applies an entry fee of 5% on their range of funds, but if you invest in their funds through an adviser or third party platform no entry charge will apply.

Ongoing Invesco Charges average 0.82% with the Invesco Emerging European being the most expensive at 1.17%.

As identified in our analysis Invesco have struggled to deliver competitive returns from the majority of their funds, with underperformance not exclusive to any one particular region or asset class. One of the regions were Invesco has struggled the most is from their UK focused funds. 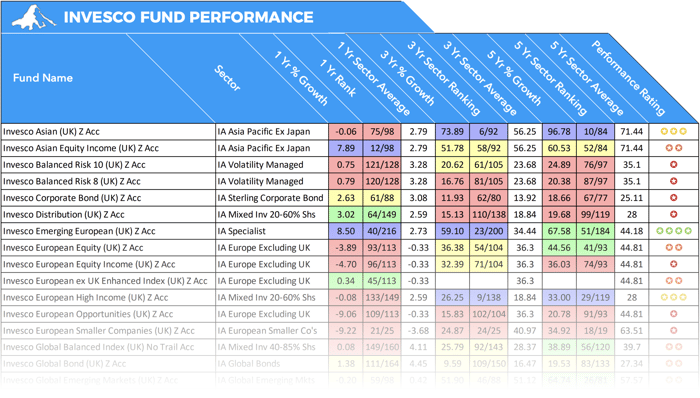 Quoting Mark Barnett, who replaced Neil Woodford as the manager of the Invesco Income and High-Income funds, he comments for the sake of current investors “UK equities will bounce back but this is dependent on the outcome of certain political events, which are clearly beyond my or anyone else’s control in the short term.’

But in reality, their UK funds have underperformed for some time (as have the significant majority of their fund range) when compared to competing same sector funds.

As a result of their funds’ performance over the recent 1,3 & 5 years, Invesco has ranked 68th out of 75 fund management firms within the Yodelar fund manager league table.

When compared to their competitors Invesco Perpetual have been among the worst performing fund managers. With more than half of their funds ranking in the bottom 25% over the last 12 months, their immediate outlook does not look particularly positive for investors.