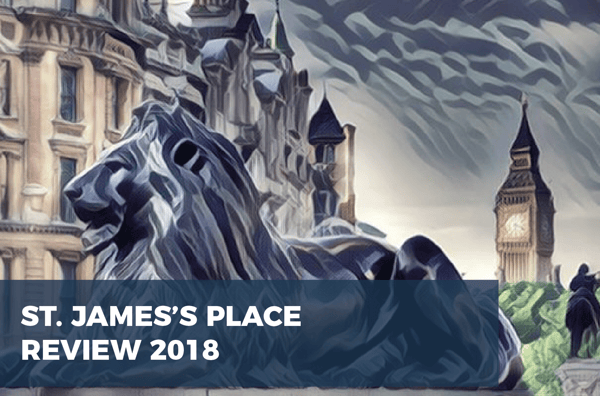 Our 2018 analysis of St James's Place found 87.5% of SJP funds were ranked in the worst 25% of funds when compared to all other same sector funds.

For a more up to date SJP fund and performance analysis access our recent St James Place review.

We also identified the highest charges seen in the industry with some St James's Place clients paying over 7% in the first year of investing. At a time when transparency and flexibility are high on the regulator's agenda some SJP clients are still faced with exit penalties of up to 6%.

This downloadable report details the performance and charges associated with all St James's Place (SJP) funds and model portfolios.

* SJP are among the most expensive wealth management firms in the UK with some of their investors paying over 7% of their initial investment in upfront fees.

* Each SJP portfolio contains poor performing funds that have ranked among the worst 25% of funds in their sector.

* Their popular Immediate Income portfolio returned growth of 5.2% last year - but the initial and ongoing fees for this portfolio exceed 6.8%

* 87.5% of SJP funds received a poor 1 or 2 star rating from Yodelar as they have consistently been among the worst performers in their sectors.

The new Chief Executive of St James's Place, Andrew Croft, has called 2017 a ‘record year’ for the firm. The wealth management giant reported net inflows of £9.5 billion in 2017 (an increase of 40% on the previous year) with their total funds under management rising by 20% to £90.7 billion.

Croft claims that SJP’s growth was due to their continuing focus on achieving the best possible outcome for clients. However our recent St James’s Place analysis identified high charges and poor performance for new and existing SJP clients. Through acquisition, SJP did grow adviser numbers by more that 7%, naturally increasing inflows into SJP funds.

Many investment clients have followed their existing advisers over to SJP where their funds are then moved out of their old investments and into a portfolio of SJP funds, increasing SJP’s funds under management. This 7% rise in SJP adviser numbers now places their total number of advisers at 3,661.

Despite the recent positive comments surrounding their business figures, St James’s Place are no stranger to controversy.

In recent times SJP have experienced a storm of negative press, and have been criticised for having high, non-transparent charges as well as a sales focused approach - rewarding their distribution/financial advisers through the use of “Nectar Points” or an “Air Miles” style reward structure.

Most recently, the consumer watchdog Which? carried out an undercover investigation into St James’s Place and found some of their advisers had misled potential customers regarding their restricted advice status (only able to offer their own investment funds, and not 'whole of market') and failed to comply with transparency rules on the disclosure of charges.

Buyers Beware of Writing Investments In Trust with SJP:

Investors have also contacted Yodelar complaining that they have written investments in trust with St James's Place, and while they understand the tax advantage of keeping their investments in trust for the benefit of their beneficiaries, unfortunately they have been unable to move the proceeds of the trust outside of SJP funds due to SJP's trust contract. In essence, St James Place have locked the money within their funds until the proceeds of the trust are taken by beneficiaries, which could be 20 years or more into the future.

If working with a Whole of Market Adviser, Trustees will generally have the flexibility to change funds/investment brands over the term of the trust, based on the requirements of the trustees. For SJP clients, the inability for trustees to move funds outside of SJP, may in effect make trustees liable under the Trustee Act, on the basis that they are not acting in the best interests of the beneficiaries.

The biggest source of contention relating to St James’s Place is regarding their charging structure, which is often criticised for being too hefty and lacking transparency.

Indeed, our analysis of St. James's Place charges established that in some cases, their range of unit trust/ ISA funds can cost investors more than 8% of their initial investment in the first year alone, with subsequent ongoing annual charges that can exceed 3%. These fees can have a significant longterm bearing for their investors who have to give up, in some cases, more in fees than the returns their investment generates.

For example, the SJP Property fund currently holds more than £1.2 billion of investor money. This fund generates huge revenue for SJP as investors in this fund are charged 8.06% of their initial investment in the first year and 3.06% each year thereafter. To put the scale of these fees into context an initial investment of £10,000 into this fund would cost £806 in the first year which reduces the value of the investment to £9,194. Over the most recent 12 months, this fund returned moderate growth of 6.67%; this means that after one year the initial £10,000 investment would be valued at £9788.85. Therefore, the cost of investing in this fund was greater than the returns it delivered. 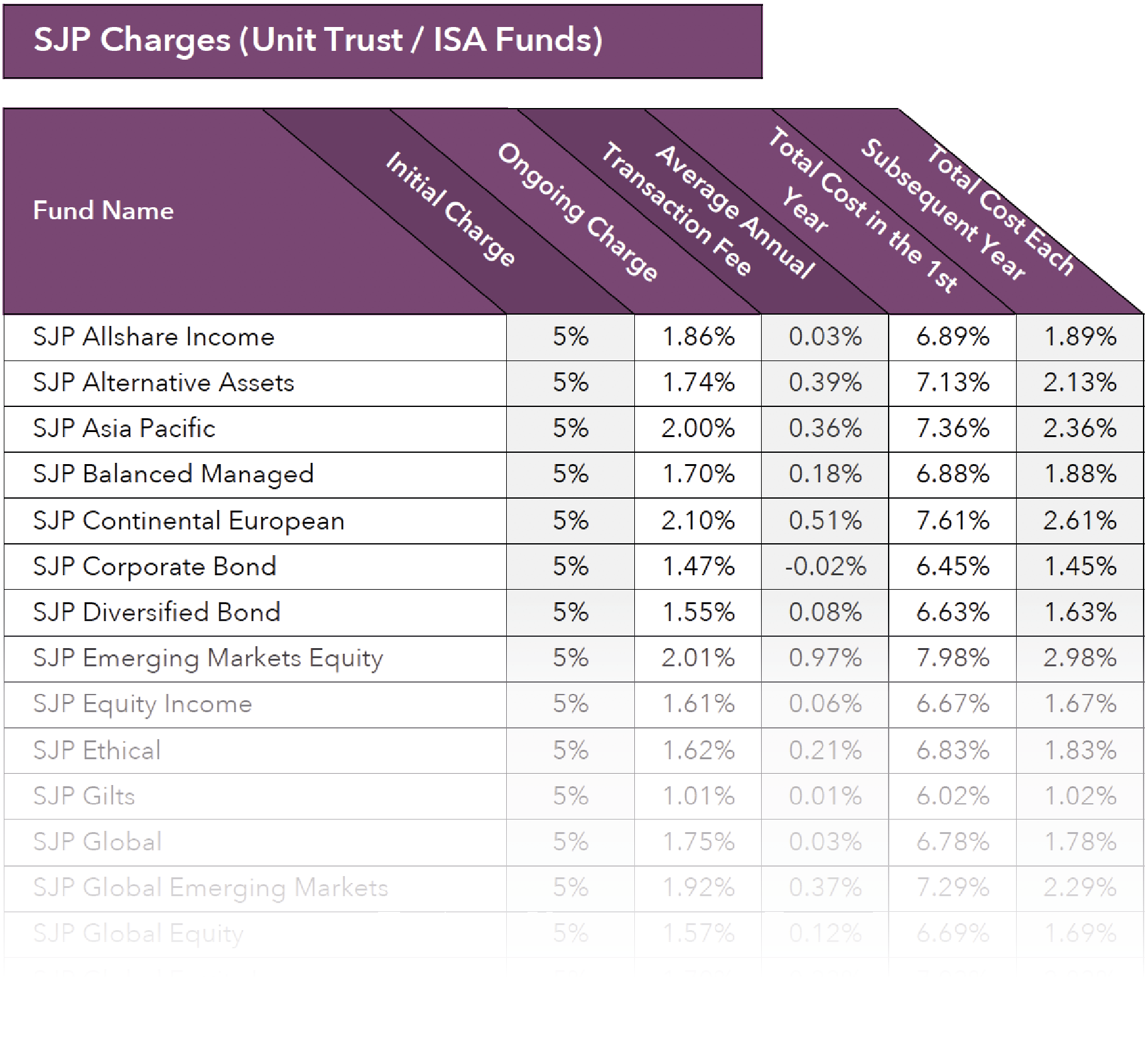 Our cost analysis of St James’s Place identified that investors who invest in their range of model portfolios are faced with fees that can exceed 7% of their overall investment in the first year.

In total, 9 of SJP's model unit trust/ISA portfolios were reviewed. This analysis details the underlying funds that make up each portfolio along with their associated charges, which include, Initial charge, ongoing annual management charge, annual transaction charge, and the overall ongoing total expense of investing in each SJP fund. 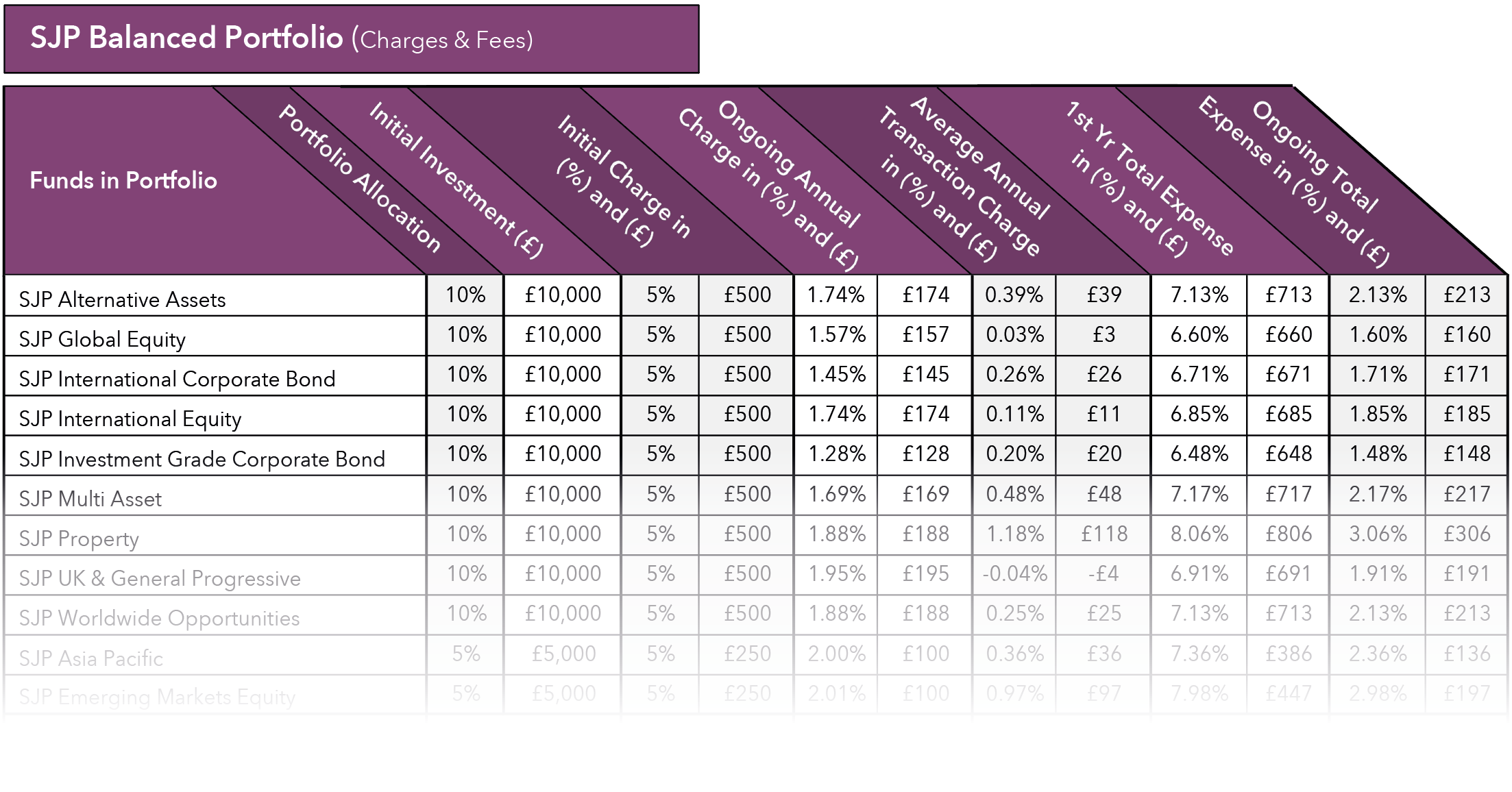 SJP have also faced increased scrutiny in regard to poor performance from their funds.

One of the top performing St James’s Place funds is their North American unit trust/ISA fund. This fund returned growth of 150.50% over the previous 5 years, which ranked above 91% of competing funds in the same sector. However, over the past 12 months this fund’s performance has slipped to below the sector average.

From SJP’s range of pension funds their Diversified Income fund was among their best performers. This fund has consistently ranked in the top 25% in its sector for performance over the recent 1, 3 & 5 year periods and over the recent 12 months it returned growth of 15.77% which was better than 97% of all other funds in the same sector.

From their range of life funds the SJP Global Emerging Markets life fund has enjoyed a strong 12 months returning growth of 13.23%, which was greater than 82% of all other funds in its sector. However, over the recent 5 years this fund has not been so competitive. In fact, its recent 5 year growth of 30.83% was well below the 43.17 average for the sector.

Our analysis of these funds identified that the SJPI Global Managed EUR fund delivered 5 year returns of 100.76%, which was greater than any other SJPI fund. Over the recent 12 months the volatile SJPI Worldwide Managed USD fund returned growth of 21.62%, which was greater than 95% of funds within the same sector. However, although this fund has had a strong year, over the past 3 & 5 years it has been one of the worst performers in its sector. 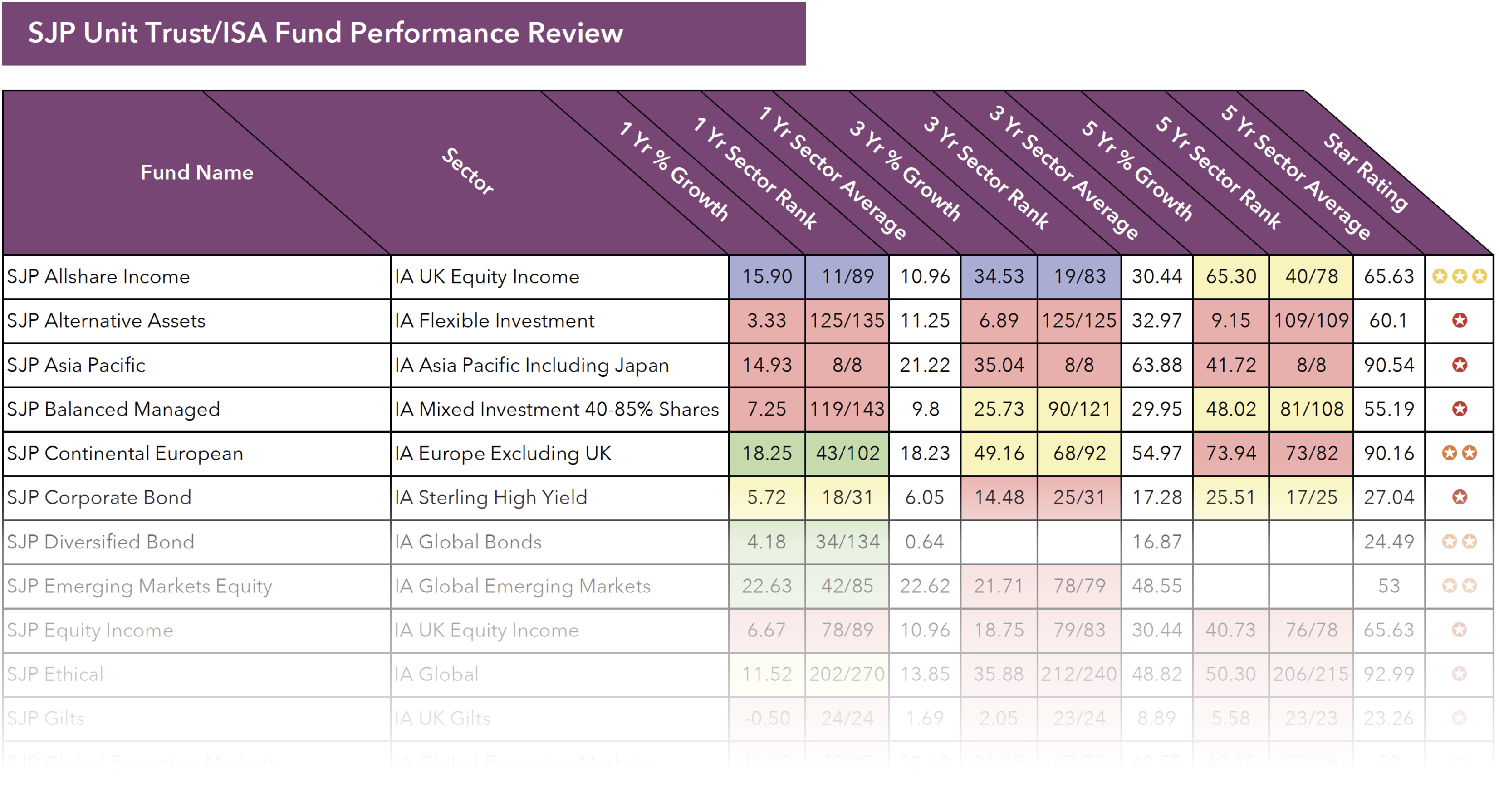 As the recent 1, 3 & 5-year performance tables show a large proportion of SJP funds have underperformed when compared to all other same sector funds.

From SJP’s unit trust/ISA range of funds their Asia Pacific fund has consistently underperformed. Over the recent 5 year period this fund returned growth of 41.72%, which was the lowest in its sector and well below the sector average of 90.54%.

Holding over £1 billion of investor money the popular SJP Equity income fund has also been a serial under performer. Over the recent 5 years this fund ranked 76th out of 78 funds.

The SJP Gilts pension fund was another fund to experience poor performance. This fund ranked 147th out of 156 funds in its sector over the recent 5-year period with growth of 6.52%. In contrast, the top performing fund within the same sector returned growth of 52.88% over the same period.

From their life fund range the SJP Ethical fund was one of the many SJP funds to underperform. This fund returned 5-year growth of 42.26%, which ranked 392nd out of 410 funds in the same sector and was also notably lower than the sector average of 75.37%.

From their offshore range of funds both the SJPI Money Market USD and SJPI Multi Asset USD funds have been the worst performers in their entire sector over the past 5 years.  Over the recent 3 years the SJPI UK High Income GBP fund also returned the lowest level of growth in its entire sector.

How do their portfolios compare?

Each SJP model portfolio has been created to suit different investor profiles and therefore assumes varying levels of risk and growth opportunity.

Our model portfolios follow the asset allocation model used by the consumer watchdog Which? and contain funds that have consistently outperformed their peers.

(These portfolios do not constitute financial advice, but can act as a helpful starting point for a conversation with a financial adviser. If you require investment advice please visit Yodelar.com for more information. Our model portfolios are for information purposes only and have been created to provide an insight into the growth returned by 6 risk adjusted portfolios that contain consistently top performing funds.)

Should you invest with St James’s Place?

SJP’s business model has been hugely profitable for SJP. Continued acquisition of local and regional advisory practices has allowed them to build a substantial customer base of around 630,000 clients with total funds under management closing in on £100 billion.

Their restricted approach limits clients to their own ‘in-house’ range of funds and their ‘Nectar Points’ reward scheme for their partner advisers, which is based on the amount of client money they draw into the business, has raised concern with a number of investors who feel SJP’s focus is simply on selling their products rather than delivering for investors, and according to the Financial Ombudsman Service they are the most complained about specialist wealth firm when it comes to investments.

As a business, record inflows of £14 billion in 2017 allowed their shareholders to be rewarded with a 30% increase to their year end dividend from the previous year. However, while they celebrate their business success their range of funds and model portfolios have consistently underperformed for their clients who are also faced with some of the highest fees in the industry.