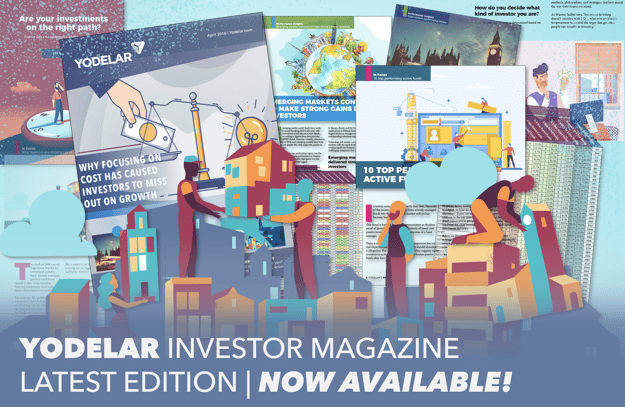 In this edition, we look at why passive investments fail to deliver the level of growth when compared to their top performing actively managed counterparts.

Also featured in this edition are some of our most comprehensive performance tables which identify the top growth funds and top growth sectors over the last 5 years.

Despite the challenges faced by many markets over the past year, a proportion of fund managers have been able to maintain a level of performance from their funds that was significantly greater than their peers. From an analysis of more than 20,000 funds and share class options we identify 10 funds that have returned some of the best growth in their sectors over the past year.

Also featured in this edition are fund manager performance reviews for Aviva, Janus Henderson, and Premier Asset Management. Find out how each of their funds performed and how they rate alongside their same sector competitors.

The myth of passive investing

The skills of fund managers have been called into question, and an ever-growing number of investors, advisers and investment analysts now see a passive investment approach as the best option.

Advocates of passive investing promote a generalist view that passive funds outperform active funds over the long term. However, the reality is, despite a large proportion of active funds underperforming, there are still a considerable number of high-quality active funds available that continue to deliver higher growth than their passive rivals. In this report, we explore the performance of each passive fund classified by the Investment Association and compare their returns to some active funds that have consistently been among the best in their sectors.

Despite the challenges faced by many markets over the past year, a proportion of fund managers have been able to maintain a level of performance from their funds that was significantly greater than their peers.

To help identify the funds that have excelled within their sectors this year, we analysed the performance of more than 20,000 funds and their various share classes that spread across 35 investment sectors, and feature those that have ranked 1st in their sectors for growth over the recent 1-year period.

The funds featured in this report helps to provide clarity as to which funds have been the best performers within their sectors over the recent 12-months.

Aviva is an instantly recognisable brand throughout the UK offering a wide range of financial products, and they are currently the UK's largest insurance company with more than 15million customers nationwide.

In this report, we analysed their extensive range of funds over the recent 1, 3 & 5-year period and identify the performance and sector ranking for 373 Aviva investment funds. These funds were made up of 32 unit trust funds, 161 Life funds, and 180 Pension funds.

Our analysis identified that 17.2% of Aviva funds managed to either maintain a level of growth that was better than three-quarters of funds in their sectors or consistently kept a competitive level of growth compared to their peers.

The merger between Janus Capital and Henderson Global Investors created an extensive and ambitious fund management network with significant client assets under management. But has it improved the performance of their funds or are their better-performing alternatives available?

Overall, our performance analysis identified that only 7 of the 66 funds analysed maintained a consistently competitive level of performance in comparison to their peers over the 1, 3 & 5 year periods examined. Conversely, 47 of their funds have returned growth that ranked below at least 50% of their peers during the five year period analysed.

Through all the ups and downs of the investment market as well as the usual economic and political upheavals, the senior management team's belief in the Premier philosophy remains solid. In terms of size, they currently manage funds on behalf of over 60,000 investors – large enough to make an impression in the industry but still small enough to maintain a close relationship with their customers, who currently entrust them to manage £6.9 billion of their assets.

In this report, we provide a performance rating for each of their funds based on how they fared compared to their peers and where they ranked within their respective sectors over the recent 1, 3 & 5-year periods. Our analysis found that 2 Premier funds had continually maintained a level of performance that was greater than at least 75% of their peers within the same sector. However, over two of the three periods analysed 13 Premier funds returned growth that was below at least half of all competing funds within the same sector.

Funds with the highest growth

These easy to understand and comprehensive performance tables have been compiled from an analysis of more than 3,500 sector classified funds and they identify the funds within each sector that have returned the highest growth over 6 different time periods ranging from the most recent 1 month to the past 5 years.

Log in now to view the latest Yodelar Investor Magazine.