Vanguard founder and former chairman Jack Bogle, who died earlier this year aged 89, was credited with creating the world's first index fund – that is, an investment tied to a benchmark like the S&P 500 and not actively managed by human stock-pickers.

His idea was simply to "buy the market" as cheaply as possible, figuring that the gains from cutting out fees and expenses would pay off in the long run.

This philosophy has helped Vanguard build an investment juggernaut with almost £5 trillion in assets under management.

Vanguard offers investors access to a range of funds which include a mixture of multi asset, actively managed and passive strategies. Although they have a reputation as a low cost fund manager we analysed their funds for performance to identify how competitive they have performed.

In this report, we analysed the performance of 132 Vanguard funds alongside all other funds within their respective sectors and provided them with an overall performance rating between 1 and 5 stars based on where they ranked within their sectors for performance.

As identified in this report, almost 30% of their funds received an impressive 4 or 5 star performance rating.

Our analysis of these funds identified that 42.4% received a poor performing 1 or 2 star rating with the majority (28%) receiving a modest 3 star rating. The remaining 38 funds had consistently outperformed the majority of their peers over the 1, 3 & 5 year periods analysed and received a very impressive 4 or 5 star rating.

Vanguard's most popular range of funds with UK investors is their 5 LifeStrategy funds, which are essentially 5 ready made portfolios, each with different levels of potential risk and return.

Each LifeStrategy fund is made up of between 6,000 and 20,000 underlying holdings across a full range of sectors and industries, and their low-cost structure means investors only pay 0.22% in ongoing charges (OCF) each year, with no entry or exit fees.

The LifeStrategy funds have become a firm favourite with many investors and since their launch in 2011 they have amassed combined funds under management of £22 billion.

The Vanguard LifeStrategy 20% Equity fund has the lowest potential for risk and currently it has a risk category of 3 out of 10. As the name suggests, this fund is made up of 20% equities with the remaining 80% held in lower risk bonds. This funds Global mix of assets sees it classified within the IA Mixed Investment 0-35% Shares sector alongside 61 competing funds with at least 1-years performance history. Over the recent 1-year period this fund outperformed 97% of its peers with 12 month returns of 6.67% in the 12-month period up to 25th May 2020. Over 5-years it managed to return 26.86%, which was well above the 13.49% sector average for the period.

is the most adventurous in the range with a risk rating of 7 out of 10. This fund sits within the highly competitive IA Global sector and over the 1, 3 & 5 year periods analysed it managed to returned -0.98%, 13.28%, and 44.53%, each of which fell below the sector average. In contrast, the popular and consistently top performing Baillie Gifford Global Discovery fund, which also sits within the IA Global sector, returned growth of 26.94%, 87.71%, and 135.81% for the same periods.

They are a popular choice, in particular with advisers, as their structure takes away a lot of the complexities that come with retirement planning. There are currently 11 Target Retirement Funds available and they range from a target retirement date of 2015 to the furthest of 2065.

Each fund in the target-date series has similar underlying holdings that are essentially a mix of Vanguard index funds, however the asset allocation for each varies to reflect their different retirement dates.

Due to the composition of index mutual funds and the Vanguard management style, the Vanguard Target Retirement series of funds has a low expense ratio ranging from 0.16% to 0.18%.

They each sit within the IA Mixed Investment 40-85% Shares sector and over the recent 12-months 7 have all ranked in the top quartile with returns that were better than at least 75% of competing funds within the same sector.

77 of the 132 Vanguard funds analysed were from their range of ETFs. Our analysis of these ETFs identified 30 to have a history of poor performance and thus rated as poor performing 1 or 2 star funds. One of the most disappointing was the Vanguard Energy ETF which has consistently returned large losses for its investors. Over the past 1, 3 & 5 years this fund returned losses of -35.13%, -35.49% and -32.60% respectively.

Among the top performing ETFs managed by Vanguard is their Information Technology fund which is a huge ETF that is responsible for almost £23 billion of client assets. This fund seeks to track the performance of the MSCI US Investable Market Information Technology 25/50 Index and over the past 1, 3 & 5 year it has returned huge growth of 32.68%, 97.21% and 211.70% respectively.

Our analysis found that of the 38 unit trust and OEIC funds that we analysed for this report 3 consistently managed to maintain a top quartile sector ranking over the periods analysed. Their top performer was the £410 million Vanguard UK Long Duration Gilt Index fund which is a passive fund that tracks the performance of the Bloomberg Barclays U.K. Government 15+ Years Float Adjusted Bond Index.

Another fund that performed well for Vanguard was their US Government Bond Index fund. This fund seeks to provide returns consistent with the performance of the Bloomberg Barclays U.S. Government Float Adjusted Bond Index, and over the past 1, 3 & 5 years it managed to return cumulative growth of 17.06%, 24.88% and 53.13% respectively. 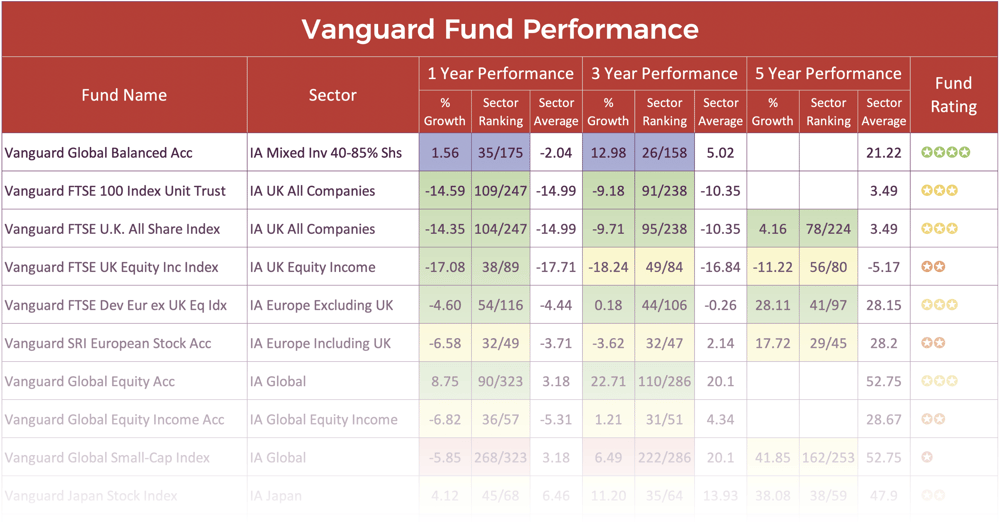 Vanguard have been one of the biggest beneficiaries from the rise of low cost, passive investment products which has helped them grow from £575 billion of client funds under management in 2005 to £5 trillion today. Their founder Jack Bogle was credited with creating the first index fund and his famous saying "Don't look for the needle in the haystack. Just buy the haystack!" fits Vanguards mainly passive approach to fund management.

Their relatively recent addition of convenient, ready-made investments has proven popular with UK advisers and their investors, who have entrusted tens of billions to these low-cost products, which have largely performed well compared to their peers. This mixture of convenience, low-cost and competitive returns certainly makes Vanguard and their products an attractive option for many, but for those who wish to maximise their portfolios returns the passive structure of Vanguards funds is not always the best option.

As demonstrated in our top fund reports, the best performing active fund managers often deliver considerably higher returns than their passive counterparts, which for growth seeking investors, can be significantly more rewarding, and as demonstrated in our report best performing investment portfolios Vanguards range of LifeStrategy funds have been unable to match the performance of strategically built portfolio of funds.

With a strong selection of consistently top performing funds combined with their comparatively low costs, Vanguard and their products are among the most attractive on the market for both growth seeking and cost-conscious investors. 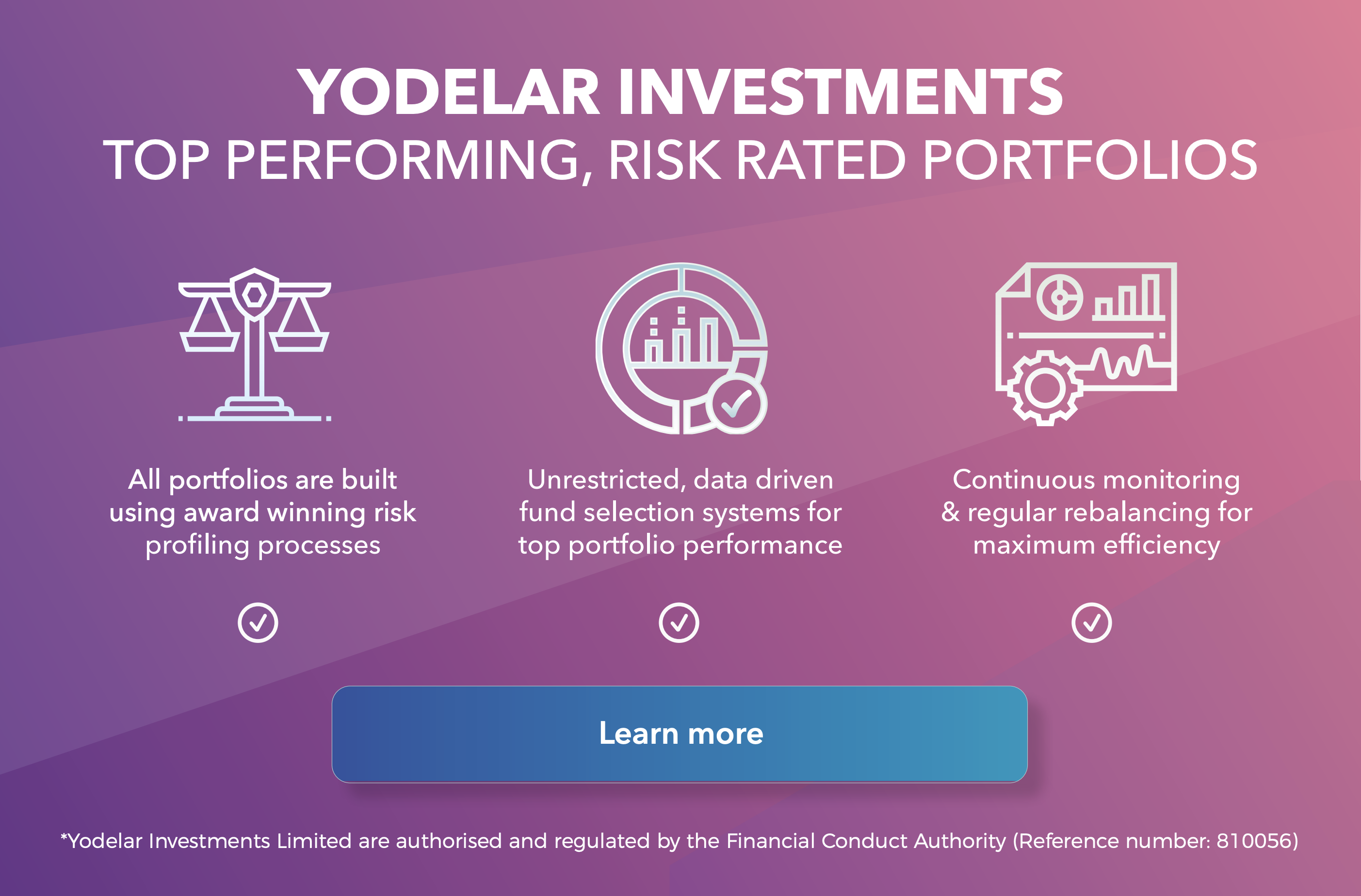